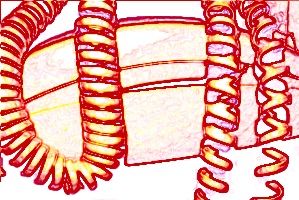 My partner and I have a tradition of calling people for their birthdays and singing "Happy Birthday" in harmony (she sings the melody; I harmonize). We had made those calls much more often during our early years together, when we were in touch with her family on a fairly regular basis -- before all of that had dropped away.

Last Sunday -- rather, in the wee hours of Monday morning -- my partner wanted to make an early call to her mother so that we could sing to her, even though her mother's birthday wouldn't be for a few more days. I pointed out the late hour even on the West Coast (my partner hadn't realized the time), so we didn't go ahead. But otherwise an early call was fine with me. As far as I'm concerned, the more my partner communicates with others, the better.

Her mother is in an assisted living facility and has dementia. One of my partner's brothers is caregiver there.

My partner seemed to have forgotten altogether to make the early call. On Thursday she awoke from her nap at around 8 p.m. our time. I knew she needed time to awaken, take one of her meds, and then eat.

When she seemed settled I reminded her about the call, since Thursday was her mother's 92nd birthday. My partner had thought we were already into Friday.

We're on a land line. Normally one of us dials the number and calls out to the other to pick up another phone when the other end starts ringing. My partner dialed; then I heard her speaking and picked up in time to hear her apologize to the other end. Wrong number, it seemed.

I offered to dial. No, she said; she'd dial.

The same thing happened. And again.

This time I went on the Web, got and called the facility's main number. From the main number we got the same number my partner had supposedly been dialing. The main number couldn't transfer us; we'd have to call it directly.

My partner said, "I didn't ask who it was." Which meant that it was quite possible the "wrong number" was actually my partner's mother after all.

I dialed the direct number and asked if we were speaking to my partner's mother by name. Bingo. :-)

Partner's mother said she enjoyed it.

Partner then asked her mother if she could still take walks like the walks she and my partner's father used to take daily to their local McDonald's.

I thought: Oy. My partner's father had died last September. I had the feeling she might have dropped an emotional hot potato over the phone, straight off.

There was dead silence for a bit. Then my partner's mother said, "Give everyone my love," and was then fairly unresponsive.

I have no idea if my partner's question created any distress. She and her mother are both dealing with cognitive difficulties.

A bit later, as gently as I could, I brought up to my partner the idea of letting her mother tell us how and what she was doing, and that we could follow her lead over the phone. That the memory of those past walks might have raised some strong emotions.

Partner then talked about calling her mother back over the next few days, to help her mother express her emotions better -- since her mother (and, my partner said, anyone in the family) had never been good at expressing emotions. That this was something her mother could learn to do.

What with her mother's condition, that wasn't exactly the message I had tried to get across. But my partner's interpretation didn't surprise me. She likes to fix things. :-)

Partner later told me she thought her mother had said, "Give everyone my love," because she hadn't remembered my name -- which is quite possible. And the lack of responsiveness could have been from fatigue, because her mother had probably been taking birthday calls all day. That is also quite possible.

I don't know if there actually was emotional upset. It could just be the dementia. The phone call was brief and awkward, but as I see it the saving grace was that my partner and I both sang to her mother and her mother had enjoyed our singing.

Hi EJ--I think it's awesome you and your partner does this. I also think you've taken the right track: It's all about the love behind the song. :) I think it's soooo important to make these kinds of calls and, really and truly, the call itself is what matters most. \r\n\r\nDoes your partner call her mom regularly? If not, perhaps a more regularly scheduled call could help make for less awkward calls?

<a href='http://www.m40.siteground.biz/~caregiv6/members/kreisler/' rel=\"nofollow\">@kreisler</a>, I checked with my partner and we'd love to make the call and sing to you in September! :D