The time was about 30 years ago, and I was in my mid-20s. I was living alone and self-sufficient for the first time, on my way toward getting a divorce. I had good friends and good neighbors, day job and freelance work. My mother had died; I was estranged from my father. Little by little, I was learning to trust myself and my instincts.

I took the express bus into Boston, then caught the subway to work. My journal notebook traveled with me.

I was sitting on the bus for home when the driver prepared to pull out. At the last minute he stopped and waited for a woman who hurried to get on board, and that gladdened me. He could just as easily have gone ahead and left her to wait for the next bus; the one I was on was not the last one of the day. I've missed such buses, myself, by the slimmest of margins.

My gladness was short-lived. As soon as the woman was on board, the driver chewed her out something fierce, for being just a few seconds late.

His behavior was an eye-opener for me, but not because it was new. He could just as easily have let her wait for the next bus if he was so time-pressed. He didn't have to perform a chivalrous act only to yell at her and -- I felt -- show his true colors.

The issue here wasn't time. It was power.

More than a decade after the bus incident, I reunited with my father. During the last years of his life, I learned of his own powerlessness as a child and of the violence in his own home. It gave me insights into his behavior that I hadn't had before.

My father had been a martyr. The payoff for him had been freedom to rage -- so much so that I often cowered in my bed when I heard yelling, sure that I would be punished for I-had-no-idea-what. Even yelling on the TV made me freeze, until I realized that I was hearing a voice that wasn't his.

I had been fascinated as I watched the bus driver yell at the woman, after he seemed to have done her a kindness. From the standpoint of an outsider I could deconstruct the behavior as it occurred, calmly because I didn't feel threatened, myself. I had been learning to trust my inner voice that told me, This is wrong. This doesn't fit.

There was so much brainwashing I had to counteract, so much deprogramming I had to do. I often felt as though I were lying to myself, when in fact I was learning my own truth, like the truth that I deserved happiness. Much of my personal baggage consisted of lies masquerading as truths. To heal, I had to keep "lying" to myself until the illusion fell away and I could fully accept that I was telling myself the truth after all.

Until caregiving, I thought I could claim that I had worked through all that. Caregiving uncovered more layers of that onion.

These past few years I've been working through those layers as well (are there yet more? Who knows?). But prior to my partner's diagnosis and my better understanding of her condition -- prior to my ability to detach emotionally as best I could -- prior to two years of my own therapy -- my martyr baggage was hitting me square in the face.

At the time, my partner denied that anything was wrong; this lack of psychological insight was part of her condition in and of itself. The more demands she made on me, the harder I tried to satisfy them, the more critical of me she became. My gut kept screaming, This is wrong. This doesn't fit.

I was doing everything I'd been told to do and was physically and emotionally exhausted. My partner pointed out everything I was doing wrong. Why wasn't I charging more for my freelance work? (She knew nothing about market rates.) Why wasn't I getting promoted at my day job? Why wasn't I fighting harder against office politics despite all my efforts at HR? (Why wasn't she looking for work? I silently asked. Why was she making promises she never kept and coming up with one excuse after another? Why am I paying all the bills and it still isn't enough for her?)

She wanted me to buy a house because all her other siblings had houses. I focused on paying the rent for our apartment. Finally her insistence wore me down and we went through the motions of house-hunting. It was heartbreaking.

(I was lucky enough to inherit a house when my father died. Now we have a house.)

A surprising thing happened: The scripts didn't affect her the way they had affected me. They tore me apart even as I parroted them like one possessed.

But they seemed to bounce off her like water off a duck's back. Her baggage after all, her scripts, are different from mine in this regard. She seemed completely untouched by the verbal flames that consumed me even as I became the flamethrower.

That was an eye-opener for me, too.

These days my partner expects me to buy her a car (her truck is old but it still works fine; she drives only about once a month), even as her neurologist and I agree that she should not drive alone. She's been working to overcome her own perfectionism, which makes her more forgiving of my imperfections, but her drive toward trying to micro-manage me is still strong.

"I'd like to table this for now" has become one of my go-to phrases. :-) So far it works great, especially after I've listened to her as she gets whatever she needs to get off her chest.

I'm still learning the rules, especially since, as my partner readily admits, her condition "is a moving target." (Her insight has been improving, thank goodness.) Most of her clothes are old, but she rarely wants new ones. (I was thrilled when she had picked out a nice fleece jacket that she wanted several years ago. By the time we got home, she had changed her mind and made the jacket into a cushion for our cats. After the cats died, she resurrected the jacket, removed enough shed fur to construct a kitten, and started wearing it again. It now has a scorch mark because she had let it get too close to the cooking coil she had used as a space heater this past winter.)

On the other hand, I need to be very clear when I let her borrow something, like a sweater that had been my mother's. If I'm not clear, my partner assumes that I am giving it to her and she gets upset when I want it back, because (as she puts it) it has become "part of identity."

It reminds me of how different her cognitive and emotional landscape is. I am learning not to make assumptions, and talking things out educates me about her assumptions, too. After her podiatrist appointment on Wednesday morning, she wanted to eat in the same restaurant at which I have lunch (two or three times a year at most) with a couple of friends, since we have another get-together on Thursday.

I explained that the restaurant was at least another 20 miles farther down the road and said I really didn't want to eat out at the same place twice in two days. She still wanted to go, "to see it."

I said it was just like the one we've eaten at closer to home, since it's part of a fairly economical chain.

"Oh!" she said. She had automatically assumed it was a fancy place with "atmosphere." I told her the only reason I travel that far is because my friends and I live a fair distance from each other and the restaurant location is pretty central to the three of us.

My partner was satisfied with that. We ate at a local diner instead. Rather, she had a full breakfast while I had coffee, since I had breakfasted before we left the house and wasn't particularly hungry. I also didn't want the high sodium that came with having restaurant food two days in a row.

Talking things out -- with all the extra steps required in our case -- lets us unpack our own baggage. Assumptions that may seem straightforward might not be so. And sometimes, listening without responding yea or nay can defuse what could become a tense situation.

My parents had a schtick -- a routine (one of many) that they kept repeating despite its obvious dysfunction. It would start when my mother, thinking aloud on a weekend, mused that it would be nice to have some rolls with lunch.

My father, overhearing, bounded out the door to the supermarket. Later he returned with a broad grin on his face, clutching a paper bag filled with rolls.

My mother, despite her earlier musing (after all, she was only thinking aloud), became very upset. "I didn't want rolls!"

Cue yelling from both of them. Every so often it escalated to the point where my father threatened to leave home (unlikely, since my mother was the breadwinner). On those days my mother ended up in tears, then enlisted my help in appeasing my father with cakes and romantic greeting cards while he gave both of us the silent treatment for days. Once his silence broke, he acted as though nothing had happened -- until the next sudden storm, which could erupt from something as small as a light left on. Once my mother's tears had dried, she joked to me that my father was having his period. It did seem to happen about once a month.

In his Book of Runes, Ralph Blum writes, "When something within us is disowned, that which is disowned wreaks havoc. A cleansing is required here; in undertaking it you fund a will and strengthen character. Begin with what is most difficult and proceed to what is easy. Remember that 'suffering,' in its original sense, merely meant 'undergoing.' Thus you are required to undergo the dark side of your passage. To control your anger, to restrain your instincts, to keep your faith firm—all this is at issue here. Modesty and good temper are the essential blessings at such a time." (From the Rune Nauthiz: Constraint, Necessity, Pain)

About Nauthiz, Blum also writes, "When you are able to look upon this Rune with a smile, you will recognize the troubles, denials and setbacks of life as your guides, teachers and developers."

I can claim my martyr baggage, lifting it from the baggage carousel that goes around and around and around. I can unzip it, but I don't have to wear those clothes. What's more, I am continually honing my ability to recognize when I am about to slip into those outdated fashions.

Recognizing and restraining my darker instincts lets my better instincts come through. I try to be the best bus driver I can be. 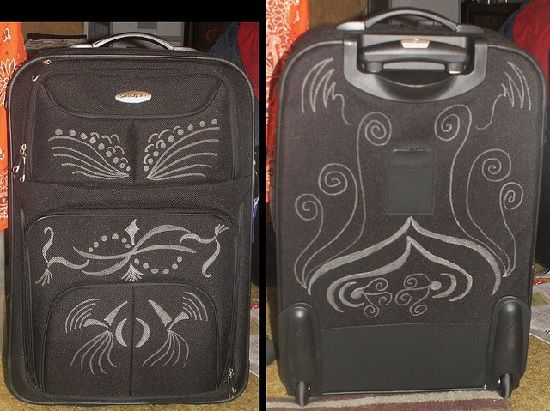 The last time I flew was in 2009. I doodled on my black luggage with a silver Sharpie, so that I could pick it out from among all the other black luggage on the baggage carousel.

Simply spectacular. We can repeat what we learn or we can decide to learn new. Once we realize we have a choice, the choice becomes clear. \r\n\r\nI'm so glad you've chosen to be here with us. :)