Put Your Milk on Your Mush and Eat It

Put Your Milk on Your Mush and Eat It 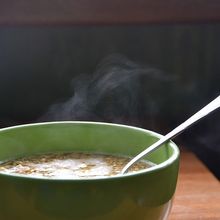 When I was a kid, my parents had friends who had a daughter later in life. I distinctly recall one occasion where the mom, who I remember as a cute, pleasantly-plump Italian lady, chased her daughter around and around the house with a bowl of soup and a spoon, while the delighted little girl refused to stand still or cooperate with her mother's efforts to make her eat. (I guess I figured the mom was Italian because the soup contained foreign-looking pasta this anglo-saxon offspring had never seen before.)

Even though I was a kid at the time, something was ringing bells in my elemental brain that this was not RIGHT. And I never forgot the look of that soup. The design of the house allowed for an endless fruitless chase, while everyone else raised eyebrows, especially my parents, who ate dinner at 5 ON THE DOT ...OR DIE. You had one choice of ice cream at my house, even if you went to Carvel, and it was CHOCOLATE. EVERYBODY GETS CHOCOLATE.

That's what dementia felt like this week. I was trying to get my mother to bed so I could spend some long-distance time with my husband while I was still alert and functional. But she was going to have none of that cooperative effort. While I chased behind her, cajoling, persuading, guiding, enticing, suggesting, she darted in and out of every doorway, this way and that, picking lint off the carpet, straightening a towel on the rod, drying a saucer, stooping to wipe up dead ants with a Kleenex.

She was going everywhere but where I wanted her to go. She even had a mischievous grin on her face, or was I imagining it? And where did all that agility and energy suddenly come from? What other faces of Eve are still in there and just waiting to come out?