Quitting is for Winners, or Honey I Think I Broke a Dog

Quitting is for Winners, or Honey I Think I Broke a Dog 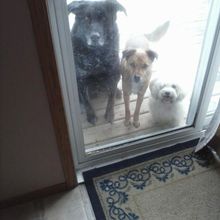 I have to say, I'm impressed with my husband.

I'm not sure what happened or when it really happened, but he's decided that he is the keeper of his health and decided to make some changes. First of all, after 30 years of smoking, he is now on week 4 of quitting and feels good. I've noticed quite a change in him in this last month with this and I think it is going to stick this time. This is the longest amount of time he has been able to quit so fingers are crossed.

Also, he's taken charge of what he is eating and instead of fighting me on what is available in the house, he is going with the flow and thinking things through. This has made caregiving so much easier on my part. Usually Mike is considered non-compliant by pretty much everyone, now he's trying to work with his care team and really listen to what they have to say. I'm thrilled.

On the flip side I have been slowly getting my energy back after my surgery and have been walking the dogs more often. Currently we are looking after my mother in law's dog so I've been dragging her along on these journeys. I think I broke her the other day. We went to the dog park and went for a short walk, but by the time we got home she could barely make it up the stairs. By the time we were getting ready for bed I had to walk her down the steps to go to the lawn. I seriously thought I'd broke her... but by morning she was back to normal. I'm glad we didn't break a dog.