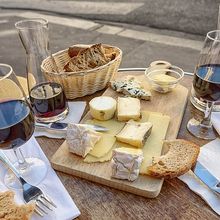 I've shared enough of the crazy stuff I've been through, I thought it would be nice to share this wonderful memory of my mother-in-law, Natalie, who died at age 89.

Natalie was a tiny woman, a former teacher and former WWII Army dietician. She taught reading at the nearby Catholic school and was in charge of the library. She also helped to form the MASS group with other teachers. MASS was an acronym. It stood for Middle Aged Sexy Swingers and they met weekly for wine, cheese, and giggles. As she and her husband, Paul, got older, Natalie started giving away anything they didn't use or need. She continued this after Paul died and, when Natalie was invited to move in with her youngest son and his family, it took only ten minutes to divide the rest of her things among her six children.

When she became ill and her weight dropped to 69 lbs., she went from home to hospital to a nursing home. The latter was supposed to be just until she was recovered enough to go home, but she decided to stay. She never wanted to be any trouble for anyone. For the most part, I think she was content.

My husband and I were visiting one day and she had been drifting in and out of sleep. Whenever she was awake, she would ask about everyone in the family and she'd smile. When it was time for us to go, we went over and gently roused her to say goodbye. She looked up at us with a beautiful smile and bright eyes and said, "It's been fun, hasn't it!"

Even at the time, my husband said he thought it was as much a statement of her life than of the day.

The next day, she had a seizure and never came back. It was then we realized those words we heard had been the last words she had spoken to any of the family. It's a blessing we will never, ever forget.

Marvelous! i always heard that what you become near the end of your life is what you were earlier but more so, because the things that moderate your \"funky\" stuff don't work any more. How glorious would it be to have, at the end, that kind of transparency and joy. It says alot about what kind of person she was her whole life.