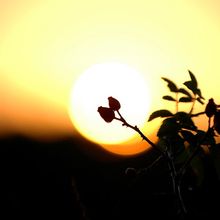 When my dad passed in December 21 2007, we had a memorial service one week later. All six grandchildren came (they were on college break at the time). They all flew in, they all got there. They even sang "In The Garden" for my dad, as he had wanted. When all the grandchildren were together, which was rare, my dad would have them sing together and then say with a twinkle in his eye, "Remember, this is practice for my funeral." One granddaughter opened the service with Pie Jesu. Three of my mom's four sisters made their way with their husbands from Arizona,North Carolina and Nebraska. (The fourth sister was occupied as a caregiver for her own husband and unable to travel.) Eight or ten of my friends from Wisconsin made the 80 mile trip to the service in Illinois, despite one foot of snow that arrived that morning. All three of us kids gave eulogies to our dad. He "got it all."

My mother passed one year ago on April 26. Because she had declined with dementia, she was not in touch with any friends at the end; in fact most of them had predeceased her. The grandkids were now embedded in their jobs and living in California, Utah, and North Carolina. My mother was living in Illinois. Had they been able to come, the only ones present to comfort would have been we three kids, and a trip wasn't necessary to do that.

As circumstances would have it, my mother's next youngest sister lost her husband on April 16 last year. We did not how how imminent my mother's death would be. All of the sisters made incredible effort to come to the side of that sister, as they had for my mother seven years before. My mother's oldest sister, age 93, had her daughter drive her from Nebraska, another flew from North Carolina, and the third drove from Nebraska.

And so they were gathered in a city four hours away from us in preparation for my uncle's funeral scheduled for April 28when my mother passed. All three of us kids were at mom's side when she passed, but there was no way to ask her sisters to come to a second service, and not reasonable to ask them to return at a later date.

I instead drove to where they were gathered, we expressed mutual comfort and mutual grief. My sister took care of arrangements for my mother, my brother returned to North Carolina and his responsibilities there.

During my mother's final hours, my husband had received a call that his father was approved for hospice, and we left the reception for my uncle hurriedly to travel to Iowa, where my mother-in-law was critically ill and being transported to a major hospital for life-saving treatment. We were back and forth to Iowa four or five times, and my father-in-law passed in June with my mother-in-law in hospice. We lost her in September.

It all makes sense that we never had a memorial service for my mother, but my heart has not been at rest about it. It seemed there was no way to honor my mom as fully as we had my dad, no place to share the stories and to express thankfulness for her life, no way to gather as a family and sing "How Great Thou Art" as she had wished.

I just could never "rest in peace."

This week, I made a couple of decisions that might help. First, I contacted my four aunts, my siblings, my children, my nieces and nephews and my cousins, and invited them to join me on Sunday at noon for a "moment of silence/remembrance/reflection/prayer of thanksgiving" in remembrance of Mom. We had elaborate family reunions with this family every year for 20 straight years, and this could be a "virtual family reunion" as we unite our hearts together. I plan to add a "P.S." this morning asking them to sing "How Great They Art" in their own homes.

And, I am finally ready to make the coffee table book I have been thinking about for a year, with photos of Mom, memories, and my eulogy. I invited the family to send me memories, quotes, photos of things she made for them, and stories. Oh, the stories.

It's the best that I can do.

I hear my mother's voice saying, in her perfectly well and perfectly healed mind now, "Honey, you did all that you could do to show me your love when I was alive. You were with me as I passed with my head in your hands and your kiss on my forehead. You whispered words of comfort to me in that time. You drove four hours to be with my sisters and to represent me there. You had to go be a support to Tom and his parents. You did everything that could be done. There is nothing to forgive. We always knew we had one another's love."

So rest in peace, Mom, as I know you are, reunited with Dad after such a long and painful seven year wait.

And I promise you, I'll do my best to rest in peace as well.