Roses are Red, Violets are Blue, Sugar is Sweet, Good Luck, May God Bless You

Roses are Red, Violets are Blue, Sugar is Sweet, Good Luck, May God Bless You

0
This is Part 2 of my mom's story about her old boyfriend and his photos (see Reunited and It Feels So Good).

Briefly, my mom was engaged before she met my dad. While going through her things, I found a photo album full of photos of her first love, "W". There was also a locket with their pictures and names on it, a sterling silver ID bracelet, and a "45" high school pin, which I guess W. gave her when he "pinned" her at age 15. I strongly believed these things should be reunited with W.'s family, wherever they were, and hoped they would welcome them.

Good Old Google. I googled W.'s name and obituary. Up popped someone of the correct last name, who had passed away last year. Some elements of the obituary were correct from my mom's telling of the story but some weren't. A friend of a friend gave me a link to the Fire Department and Rescue website, which included a photo. There was no denying I had the correct person; his teeth were fixed in the front and he was 70 years older than in my pictures, now calling himself "L", but there he was, the man who could have been my dad.

Now on to internet White Pages, which still give some decent information. I was able to confirm addresses and family members for the people mentioned in the obituary. The mutual friend asked me if I wanted to "open up this can of worms"? What worms can there be, when almost everyone is dead and we are all adults here? Deep breath, write a letter to the eldest son, tell him who I am, what I have.

About a week later, I got an email from W.'s son, L. He said my letter came as a complete surprise to his family. W. had tattooed my mother's name on his arm, and no one knew who that was. Stranger still, L. had grown up on the same street as my father's mother, my Father The Great Usurper. L. mowed my grandmother's lawn, delivered her papers and shoveled her snow. But he did not know my parents or that there was ever any connection  between our families. Through emails, I felt as though I was gaining a step family. L. and I pieced together our parents' history, together and apart. I discovered W. finished his tour of duty in the army and came back to work as a master cabinetmaker in the same military facility that my mom's dad worked, also a cabinetmaker, his entire life.

I asked him if he wanted the "censored" version of the photograph collection, or the "uncensored", since our parent's youthful joy and passion was pretty evident. Gracious and mature, L. said he would be happy to have all of his dad's things, and found all of it interesting. We both agreed not to get "hung up" on any of it.

While pondering all the intricacies of life history, I recalled my mother always said her dad was so upset about her getting married to my dad, that she didn't know until her wedding day if he was going to walk her down the aisle. All this time I assumed it was a religious issue; my dad was Catholic and my mom was Methodist back in the 50's when THAT was called a "mixed marriage". Now I wonder if my grandfather was protesting my mom marrying my dad instead of marrying W., who he obviously knew very well as a member of the family and eventually worked with as a fellow cabinetmaker.

It has now been a month since I mailed W.'s pictures to his family, and I haven't heard a word in reply. Either the post office worked its magic and lost the box, or W.'s family was just too freaked out. 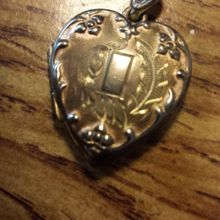 Or they may be just savoring the photos and letters. It can be overwhelming at first. When I learned about my half-brother and found a letter my mom had written to him, it was really weird. Even though I had some time between finding out about him and receiving his things from his former partner, I still needed a lot of time to digest it all.

How interesting , Jan. I what a treasure to piece together more of your mom's past. I think I would email and ask if the photos arrived...