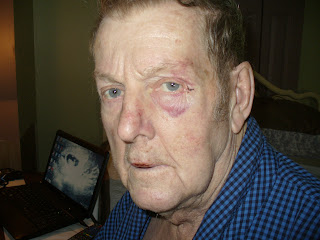 Odd how our emotions can switch from one extreme to another.

The other morning Hubby took a really hard fall from the bed hitting the bedside table, busted his lip open, scraped his nose, eye, chin, knee.

And all before I even had a cup of coffee!

I got him off the floor and into the bathroom so I could tend to him. He wouldn't cooperate and my frustration, anxiety and BP started rising I'm sure.

After finally assessing his injuries as non emergency I got him cleaned and settled in the bedroom. Poor guy looks terrible!

I walk into the bathroom to clean it and hear him tell the dog,

"Did you see Daddy's face? People are gonna think I was drinking and got in a fight and didn't win."

Our reality is that the declines in Hubby have been coming slow and steady but coming none the less and coming much more frequently that making adjustments to any new normals feel out of reach.

LOTS of feeling displaced and wanting to leave,

LOTS of conversations that seem to make no sense to anyone but Hubby and at times not even to him only leaving him frustrated.

I even found a collection of items Hubby had gathered for packing so he could leave. Smart choices on his part as they were necessary items. Well, I don't know about my bottle of perfume.

But I continue to pray for peace of mind, heart and spirit and to look for the humor in the confusion because I don't know any other way to deal with the sadness of the situation.

I haven't blogged much as we seemed to be coasting along with little to nothing to talk about. Not many humorous moments to share either, bummer.

I did a couple of DIY's with PVC I will happily share. 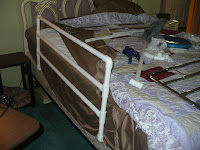 Hubby has chosen to sleep in our bed at nights now. There are no rails on that bed so I made some. $15 worth of PVC and so far so good. I am thinking I may have made it a little long but that's an easy fix. I used the hospital bed rails as a pattern but had to make the rails taller for our own bedside.

During the day Hubby sleeps in his hospital bed. He can see outside his window during the day so I wanted to give him some aromatherapy at his window. I built a PVC stand, window high, and set a planter of lavender in it. Now when the lavender blooms Hubby will have a soothing aroma as he gets some fresh air and watches his birds! It was an inexpensive and fun project to do too. 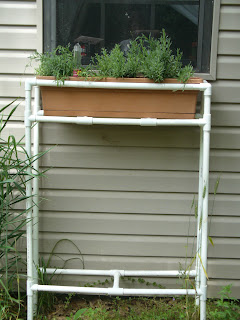 I do have a couple moments AND I want to share some news about a trial that researchers at Georgetown University Medical Center are doing. A small dose of an already approved chemo drug that might help reduce or get rid of some plaques in the early stages of people with Lewy Body dementia. According to the researchers, "(The study) offers a unique and exciting strategy to treat neurodegenerative diseases that feature abnormal buildup of proteins in Parkinson’s disease, Alzheimer’s disease, amyotrophic lateral sclerosis (ALS), frontotemporal dementia, Huntington disease and Lewy body dementia, among others."

I will let you read for yourself here.

I don't normally get too excited in all the news of "might" but this one had my attention. And although I believe it is too late for Hubby to receive the best benefits, it might help someone else just starting.

For anyone interested in joining the trial registry, here is Dr. Turner's email address:
rst36@georgetown.edu.

Now on to what IS.

When Hubby isn't driving me up a tree with the never ending looping questions, he is cracking me up with his confusion and hallucinations.

More cracking up than driving up the tree.

He asked me if we changed hands since he has been here.

I asked what he meant by that and he said, "Have they got a new manager?"

Hubby thinks he is in a VA Home and I am the caregiver so again, I explained that this was OUR home, we are the people that live here and it belongs to us, to which he replied, "Oh No! I'm not going to be the manager. I'm not going to manage all you women!"

And my favorite: One night, Hubby was sitting on his bed looking at me and said, "You know, I love you. I don't know why but I'm glad I do."

Kathy, you are a PVC master! And master of so much else. (((Hugs)))\r\nI immediately made a connection between your box of aromatherapy lavender and Hubby's must-have bottle of perfume. Both are the scents of love.

Hi--Gosh, PVC is like putty in your hands. :) I love what you create.\r\n\r\nYou create an environment for Hubby to be as he is--which is such a gift. You accept him and Lewy--you love him and work to understand Lewy. \r\n\r\nYou create amazing all over the house. \r\n\r\n:)

Kathy, I am so glad you have these \"cracking up\" stories! I too am looking for the humor these days. I love your PVC projects!! I know that a project brings sanity to those insanely \"how I am going to get thru this\" times! Prayers for hubby's healing and peace in mind ;)