ejourneys
Partner and I worked over the weekend on a memo that I had hoped to fax today to the neurologist. This sort of thing takes a long time, with much back-and-forth and efforts to condense my partner's detailed explanations into sentences that get to the main point. That in itself takes a good amount of negotiation.

Our most recent draft reads as follows:

As of June 17, 2013, [partner's name] has been on Ropinirole HCL 0.5 mg, taken nightly before bed, for restless leg syndrome. She is also taking tonic water (recommended by ), coenzyme Q10, and iron.

Please note that her medication list has changed frequently over the past few months.

is also concerned about Parkinson's Disease, for the following reasons:

1. She has reported to me movement difficulty, such that her body sometimes hesitates when she wants to move. She says some difficulty may be due to lack of exercise at the time, or to "stage fright" when she has trouble expressing a word.

For example, she had trouble saying a word and made it clear to me that her difficulty was physical, rather than cognitive (i.e., she already had the word in mind). She is unsure when she first noticed this difficulty but estimated in one discussion that it began happening "within the year" and in another discussion that it has been happening since 1982 and "in a different form" as early as high school (1970s). This difficulty applies to conveying novel thoughts, rather than practiced or familiar ones. She differentiates between thinking and speaking; she "draws blanks" in the first half minute for a novel thought. She also reports stiffness in her joints and says this goes back "about a month," which she links to calcium intake at night (500 mg). She is taking the calcium in response to restless legs.

2. She has a genetic predisposition for Parkinson's Disease; I am including printouts from 23andMe with her permission. We have more detailed genetic information as well and can provide upon request.

3. Roprinirole is also (and was originally) prescribed for people with Parkinson's.

also has an upcoming endoscopy; her next colonoscopy will be in 2015. Given her brain damage, she is concerned about the effects of anesthesia. We have learned from her ob-gyn ([name, clinic]) that the anesthesia used during her three-hour hysterectomy in 2009 was likely Propophol. We learned from [name, clinic] that the GI anesthesiologist uses a combination of Propophol, Demerol, Valium, and Fentanyl (usually two of the four).

Is there anything we need to be aware of as we move forward? Many thanks for any advice or precautions you can provide, and thanks also for your continued support.

Today my partner doesn't want to send the memo because she says she's now lowered her iron intake. (Most of her frequent changes to the med list reflect the changes she makes to her vitamin intake.)

She also wants to see a dermatologist prior to the endoscopy; she is scheduled for the procedure next Monday at 7:20 in the morning. She now thinks the contrast media used in 1982 for her CT scans had given her varicose veins. She says she's going to "call around" until she gets an answer to her suspicions, because she is now afraid the endoscopy will make her varicose veins worse.

She is visibly upset when she tells me what the hospital "did to her" in 1982. She thanks me for listening, which is just about all I can manage to do and keep my cool. I also realize that I can do only so much. She talks about the secrecy in hospitals and the medical field and how they are all authoritarian the way her father had been.

I know I just need to let this all play out. I've been learning the fine art of Whatever.

She is scheduled to see the neuro next month, at which time I plan to hand him the memo with attachments so that the three of us can hash things out. This is not the first time my partner has spent much time obsessing over a medical detail, which she then lets drop entirely under some pretense or other.

Meanwhile, I went to and enjoyed today's second meeting of the natural food store's "healthy eating" group. My partner and I had both gone to the initial meeting. She didn't want to come today; she wanted to stay home and read instead. The group asked for her.

The meeting gave me a needed break, and I enjoyed the face time and bonding with people. It's a neat little group. One of the members said at the end that he loves being able to talk about subjects that he doesn't raise with other people. 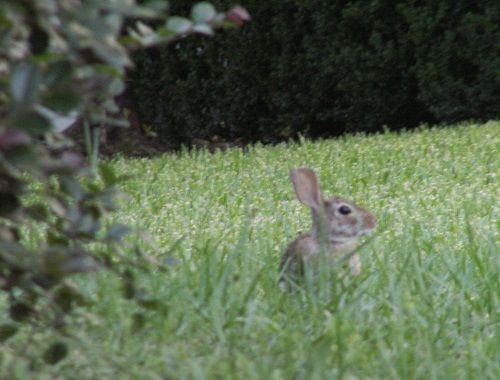 (Photo: Bunny kept me company while I did yard work on Sunday.)

Hi EJ--I'm so glad you continue to do what is right for you while respecting what's right for your partner. It's such a delicate, touchy balancing art. It's like a piece of art, what you. :)

EJ I'm literally post acupuncture but in skimming through this I can't give you enough ((((((hugs))))))))) for being there 'with' and I mean that in the deepest way possible and for me! Bless your heart, EJ. il