"She's Not There" by The Zombies

"She's Not There" by The Zombies

jan-2
My mother and I are firmly ensconced back in the Family Nest in South Florida. Thank God, the alignment of the Planets, and those miniature pretzels from Delta Airlines, our flights were safe, on time and uneventful. As we were deboarding at our final destination, my mother started up a conversation with a heavyset gentleman struggling to remove his bag from the overhead compartment. She was lamenting some man who had lost his career and died. This gentleman turned to her and I saw on his t-shirt an embroidered church emblem.

Yeah, this guy knows where she's coming from, I thought; he smiled and talked softly to her. I had this surreal sensation while everyone crowded in around us, waiting to file off the plane with nowhere to go, that we were on stage. The man behind her offered his hand to help her up. I guess we passed inspection and the show went on.

By the time we got to the end of the gate and my sister and brother-in-law met us, my mother had on that zombie-apocalypse-night-of-the-living-dead face, but she kept walking. Not sure if she knew who she was, where she was or why. I suddenly felt like Count Rogin in "The Princess Bride", who tortured Wesley for pleasure and stole years away from his life. In the five months we had been in Ohio for the summer with my husband, I had taken away five years of my mother's life because of my own pleasure and needs.

At home she opened drawers, re-washed clean dishes, put plates in her purse and fiddled until she fell asleep. I was expecting this. She got up in the middle of the night and used my bathroom; then made another appearance around 8 a.m. and told me about two big black bugs she saw. I thought, yep, Mom, whatever you say. And then she went back to bed.

Then I went into my bathroom and saw strange, brown tell-tale signs of that harbinger of tropical joy, palmetto bugs, around my sink. Those insects are inclined to pick your teeth while you sleep. I recalled my dad, whose clandestine supply of chlordane powder well after it was a banned substance kept our house bug-free and hygienic for so long. I guess the half-life of this carcinogen must be nearing its limits from my parent's move here in the 80's. Dad, where are you when I need you? And in spite of my mother's complete and utter confusion, this time she was right! 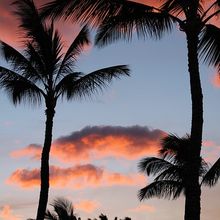