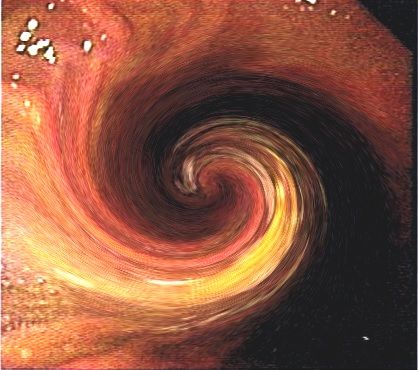 (Photo: One of my partner's endoscopy images, distorted through several filters.)

Excerpts from my handwritten journal:

8/10/13: Earlier, was expounding at length on her latest theory, that the doctors at had stapled her stomach . She bases this on the "scars" she can see in the photos from her endoscopy.

She links this "stapling" to her weight loss while hospitalized (she had been on an NG tube, plus she had to relearn how to swallow).

The thought of this extra "surgery" upsets her. She wonders why the doctors would do such a thing. There is, of course, no record in our possession that any such action had been performed. So is "sure" something had been done to her, but doesn't know why.

What is the underlying mechanism for this kind of thinking -- if such a mechanism actually exists? I wonder if Schnider's book on confabulation can give me any clues. As I see it, there's an emotional driver behind all this. That the surgeries are a smokescreen that obscures something more painful, yet that leave an outlet for her distress.

She has her theories, I have mine.

8/12/13 is still obsessed with her "stomach stapling" -- had me search for photos. Wants to know if her own "stapling" can be reversed. Is very angry for what was "done to her."

I remain silent, knowing nothing I say will dissuade her. Or I tell her to talk to .

She says she will also talk to -- who I have on recording telling me -- to quote from the transcript of July 9, "She tends to diagnose too many things that are not there." So I think: Sure, tell . And I say nothing....

has just stopped in to again talk about her "stapling." She now relates it to the job panic in Michigan as medical people hustled to find new jobs. She tells me it would help her if I looked at pictures of abandoned buildings in Detroit. I tell her I've seen them. She thanks me for sticking with her through all this. That it's "not what you expected" when we'd gotten together. She adds, "It's not what I expected, either."

I find a tragic irony in that she doesn't want to believe all this, and she's said she doesn't expect me to believe it. It's like the opposite of denial -- but it's reluctant belief in a phantom.

8/13/13 steps in, wants to ask if surgery had been performed through her navel. She wonders if she still has her appendix. Says she had asked about having it removed prior to her hysterectomy and had been told it would be awkward. She now says they said that because there's something in her records from about her appendix (I don't recall anything like that) and that the ob-gyn automatically knew about that....

Long, tiring talk with about her "stomach stapling," which I've recorded. She now wants me to record our "emotion talks."

I placed limits as best I could on what she wanted me to print out and on the length of time we talked. When she asked me what emotions I was feeling I just said, "Tired," because her craziness numbs me out and it would do no good for me to tell her how nuts this all is. She's not equipped to process that.

So she is sympathetic to what she sees as my own difficulty in processing emotions -- projecting her own situation. My job is to let all that wash over me as best I can.

stops in to tell me her eyelid has eczema, but that it is getting better.

I say, "The dermatologist said it was dermatitis." I ask her if she's been using the soap he recommended.

She goes on to say she hasn't let shampoo stay on her hair as long as before, so that it doesn't dry out her skin. She adds that she's going to take more zinc to help clear up the "eczema," because the body doesn't absorb zinc as well "following a gastric bypass."

I say, "What do you think about washing with the soap the dermatologist recommended, once a day?"

She says the soap won't go bad. She adds she's going to try the zinc first in her "experiment."

She also wants to take more B-complex vitamins, which specifically warned against. She argues that he didn't know about the "gastric bypass surgery." ( had told her to stop taking A, K, B-50 , and chromium last August [they're counterindicated for autoimmune disorders, e.g., her MS], though he still wants her taking B-12.)

We see the neurologist next Monday. I want to get these issues out in the air with him.

I now also have printouts from 23and Me with my partner's genetic info, and specifically want to raise the issue of her higher-than-average genetic predisposition for Alzheimer's (she has one copy of the APOE e4 variant). That might be enough to warrant a PET scan, which is not covered by our insurance except in cases of Alzheimer's or cancer.

As I've been writing this entry, she stopped in to let me know that she needs calcium citrate to counteract stomach acidity, since calcium citrate is listed as a nutritional deficiency following gastric bypass surgery. I've been asking her to tell me when her stomach feels acidic so that I can keep a record. At first she had said rarely, but then she told me she felt some acidity on 8/13, which she treated with magnesium. She pointed out that she hadn't experienced any acid reflux.

Last month the gastroenterologist said he'd seen (and photos had shown) food in her stomach during her endoscopy. That could be due to gastroparesis, which can happen with MS and can cause the acidity. He had prescribed Prilosec, which my partner does not want to take.

"I know I can't change your beliefs," my partner told me. "I can only tell you mine."