0
I just looked back and realized I haven't been here or written since just before my husband's last procedure -- four months ago!!!!

So much has happened in that time. I feel the need to apologize for being absent and to try and explain.

So, my husband had his procedure in late March. Doc was able to place the two stents in both the right and left groin successfully. He did an overnight at the hospital and I brought him home the next day. He was actually feeling quite good -- blood flow to his legs was improved and he was able to walk to the parking area without pain. Good, right?

About five days post-procedure, he was feeling so good, that he decided to take a walk in the neighborhood (something he has been unable to do for probably a year or more because of the pain). I asked him to be careful and he went off. Coming back, he was all smiles bragging how good he felt and how far he had walked. He went from our home, five blocks down the street to the neighborhood park, then down to the elementary school a block to the south, around the school and then up the street behind ours -- another 6 blocks -- and across the block and back to our home (another two blocks).

The next day, while I was at work, he decided to walk again and set out. He got about two blocks from our home and had to stop because of the excruciating pain. He managed to stumble home to find his right foot completely swelled up and the swelling starting to move up his leg. He called me asking what to do. I told him honestly -- either call his cardiologist (who did the procedure the week before) or go to the ER. I would come home if needed. He called his doc, who said come right in, and Heather took him. Once they got there, he could barely walk in and they got him a wheelchair!

The diagnosis was  a "We think" diagnosis. Doc felt that more than anything else this was caused by doing too much, too soon and that with the increased blood flow (now that the stents were in) the veins in the foot and ankle couldn't handle it all and some may have "blown". He also wasn't sure if this was a minor setback or a permanent issue.

We are four months later and he still has swelling in his foot and leg. He never elevates it, even though his PCP and cardiologist tell him to, and always complains to the max. There is nothing I can do for him other than ace wrap it when he asks me to. He moves like a troll, and now he stumbles and falls even more than before. His pain is continuous despite meds and more.

Now more on a month to late April. On a rainy Saturday morning, our oldest son and his girlfriend stop by the house with news. He had just proposed to her and she accepted!!!! She is here in this country on a student visa; she was acting as our student minister at church and studying nearby at the seminary for her second Master's degree. They met when she first came (from Hungary) and started dating soon after -- and as they say -- fell completely in love! It is truly a beautiful love story of how "things" happened that they came to be together if you believe. Truly the hand of God at work.

Fast forward a few weeks - and I'm picking them up from a week in Miami where she had been invited to preach. My son announced that they had picked a date for the wedding. When I asked when, she chimed in August 13! Thankfully they were in the backseat and couldn't see the look of pure shock on my face as I asked, THIS August? To which they answered, YES!!!

A wedding in about three months. OMG!!!!

So time has been on fast-forward since. Life with my husband is a daily litany of complaints, anger and more. There is no having a conversation -- he can no longer focus on anything but himself. It's getting worse by the day. Life for the love-birds has been stressful -- neither truly knew the costs involved in a wedding and they have made many concessions in order to make this happen. But the date is getting closer and I just pray daily that they can relax and actually enjoy their special day. She has been emotional these last months. She lost both of her parents a while ago and none of her siblings (who live scattered through Europe) will be able to make it for the wedding so she feels those losses acutely at times as the wedding nears. We do our best to fill the gaps, but you can never fully fill those losses, only be there to support and love.

This past Saturday was the bridal shower, a custom that was foreign to her, but she quickly adjusted and enjoyed the attention, love and gifts. Last night, some of the men from the church and his best man took my son out to dinner.

Sunday starts our County Fair where our whole family is involved. Heather, Brittany and I are Division Chairs (and I do double duty as General Co-Chair in Home Arts). Daniel and Ashley are Division Co-Chairs, and my husband and David are judges in different divisions. Kata will join as a judge/volunteer as well. The fair will run for a week, and Brittany and I will be there for the whole run of the fair with the others coming in as they can.

Then we get a week and the wedding. Daniel will be doing a live-feed of the wedding so her family can watch it live as well as recording video to splice together for them and others to watch. Brittany will be the main photographer and Heather and Ashley will have additional cameras to get extra shots. Brittany is also making their favors -- lavender flavored jellies -- as well as making the cupcakes and icing for the cupcake bar that they would like for the reception. Daniel is in charge of the playlist for music during the reception (no live band or DJ, there was no money for that). I may have to drive to Virginia to pick up my husband's 94-year-old aunt -- the matriarch of the family -- so she can attend the wedding.

I don't know that my husband will be able to do much at the wedding, I'm just hoping he doesn't fall down or make a scene somehow.

I may not be back here until after the wedding.

I'm trying to take time for myself and as soon as I finish Kata's bridal shawl (yes, I'm making it for her) I may be able to breathe a little easier. I feel like I'm on speed -- not necessarily a bad feeling -- but it's also a little stressful.

If anyone is so inclined - think good thoughts for us all on the 14th (yes, the date got changed to the 14th for several reasons). I know it will be a beautiful day.

I hope everyone here is well. I'll catch up soon. I hope. 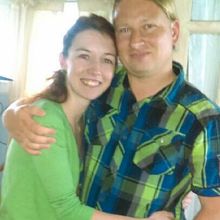 David and Kata the morning they got engaged. 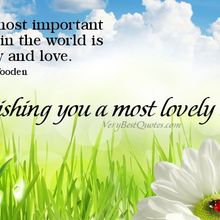 Ah, very glad about your happy news. But, how hard things have turned for your husband; very sorry to hear it. Wishing you easier days ahead.

I love the photo of the newly engaged. They dress alike, too!!!\r\n\r\nCongratulations, MD. It's sooooo exciting that your son has found his life love. \r\n\r\nPlease post of photo of the wedding dress when you can. I would love to see it.\r\n\r\nWe're keeping good thoughts for you and yours. I'm so glad you posted an update.

Whoa you really have been busy!!\r\nThe happy couple look just beautiful. I can't help but imagine what lovely babies they might have...\r\nPrayers and good thoughts for you all. It was good to hear from you.