Mamadanz
So with my husband's bypass surgery in November 2001, I spent a lot of time in the hospital chapel while he was in the OR. Finally, the surgeon came to find me and let me know all was well. Another trip to the chapel for a prayer of thanks and I was off to the post-op area to see him.

There is a special unit at our hospital where all the cardiac patients are post-surgery. Visitation is limited in time and in numbers. That first visit I made there he was still completely out. The nurses had him wrapped in blankets up to his chin, he was still intubated and had a ton of IVs going into him but he was alive! I visited each hour until he was partially awake. I finally felt I could go home to the rest of the family.

After about 24 hours in that recovery area, he was finally awake enough and was transported back to a room on the cardiac floor. This was a Wednesday. By Friday they were talking about discharging him the next day. Panic very literally set in - and I was so panicky - I cried to the one social worker that I was actually afraid to bring him home. Here in the hospital, he was on monitors and if something happened they knew immediately. At home, I had no monitors, no nothing. If something happened to him, I wouldn't know until it was too late!!! She calmed me down and assured me all would be well.

I did bring him home - along with a laundry list of new medications and more. Thank God for my mother for lending me the money to get his meds and some food. Because he had already been out of work over two weeks, there was no check to anticipate and disability hadn't kicked in yet. Plus, I had gone to our local social service office to apply for food stamps and assistance and after five hours was turned down because we made $5.00 too much!

But we got through. I fought both insurance and hospital regarding his participation in cardiac rehab. The insurance claimed they had no contract with the hospital and offered for him to go about 25-30 miles away. The hospital claimed the insurance wouldn't work with them toward a resolution, but that he could go there anyway to the tune of $100 a visit (and he was supposed to do 3 visits a week!). Finally, phone calls to both the president of the insurance carrier and the president of the hospital along with threats (nothing terrible - I told the insurance company I would own them; I told the hospital president he would still have a job once I owned the hospital - there was always a need for good people to clean toilets), I got results. Within 10 minutes of those phone calls, the cardiac rehab department called with a schedule of appointments for him, all covered by insurance with no money out of our pockets!

Six months after surgery, he returned to work and I thought we were good.

A year after surgery, regular testing showed that two of the four by-passes failed and he was back out of work. For six months, he underwent EECP treatments and more. For another six months, we got by on disability checks. We also dealt with his mom (who had lived in an apartment in the house next door to us for a few years) having a massive heart attack, surviving it, only to have triple bypass surgery, to come out of it well, only to suffer a stroke five days later.

I made the panic visits to local rehab/assisted living facilities to find a place to help her return to functioning. We finally went with the hospital's recommendation for a local facility and had her transported there where she continued to decline mentally.

While my husband endured his EECP treatments, I went daily to the nursing home (sometimes twice a day - mostly alone - but sometimes with a child or two) to feed and tend to my mother-in-law. As she declined, I tried to help my children cope. We made a game of it--"Who would we be today?"--and making guesses for who we each would be in Mom's jumbled memories. Once the kids understood that Grandmom was elsewhere mentally, they could deal and could see the bits of happiness she had. We made lemonade out of those lemons.

By spring, my husband returned to work again and I thought perhaps we were now through the worst. 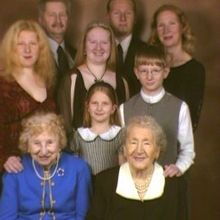