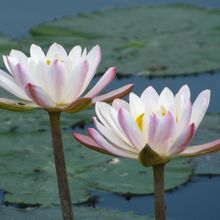 On Black Friday 2003, we got a call from the nursing home. My mother-in-law wasn't doing well and the nurse thought she should be transported to the hospital. We gave permission and left to see what was wrong. Imagine our shock to find out from the ER staff that mom was severely dehydrated and possibly physically abused! It was touch and go for a few days but Mom was strong and pulled through. Again I did the panic search for a new facility for her because I really didn't think I could care for her at home. I did find a good place and at discharge, Mom was transferred there and was truly cared for.

Now my mom had always been active, healthy, and always THERE for all of us. In December of 2003, she had a regular doctor's appointment where he proclaimed her healthy and wonderful for being 86. Even the slip on the ice she took on the way to the doctor's was brushed off as nothing to worry about.

A week later, in the evening, when I went downstairs (we lived up and she lived down after building an add-a-level when my dad passed away in 1985) to show her something, she begged me to sit with her because she wasn't feeling well. We sat and chatted and she finally decided to go to bed. But she hesitated and asked for my help because she wasn't feeling "right". I helped her up and she leaned heavily on me - something that was NOT her style. I got her to bed, said good-night and went back upstairs. On my way up, I prayed that if her time was coming, that God please find it in his way that she go peacefully and gently, not suffer.

The next morning, I uneasily went downstairs to check on her and found her sprawled on her bed struggling for breath. I immediately called 911. The EMTs were wonderful and got her stabilized and I rode with her in the ambulance to the hospital. My husband called out of work and stayed with the children. I sat in the ER with her all day. She dozed in and out of sleep but had no real problems. By 1 a.m., she got a room and I got her settled and went home.

I called her early the next morning and she sounded good. I went early to the hospital and she fretted over a function at the church the next day and that she had things to do for it. I eased her mind and then she went for a test. While she was gone, I called her sisters to let them know she was in hospital but that all seemed fine and I would keep them posted. Mom came back from her test all smiles and soon my husband and the middle and younger daughters came. The little one jumped onto the bed to hug Grandmom and Mom was happy.

Within minutes it all went downhill. Mom seemed to have some type of seizure and started gasping. I called the nurses and nurses and doctors came running in. Mom got blue and cold. The doctors called a code and went running for equipment. I went to my mom and looked at her. She tried to smile. I asked if she knew who I was. She nodded. I asked her who was I. She tried to say my name but only slurs came out. I smiled, stroked her hair and said yep--I was. I whispered I loved her and stepped aside for the doctors. I sent the girls to find me tea. Mom seized again and the professionals tried to go into action. I stepped back to her and her eyes were blank and clouded. Mom wasn't there any more. I found the lead doctor and told him no extraordinary measures please. He tried to dialogue with me: There was no DNR, she had no living will, Why? I told him my dad had passed, I was an only child, and more importantly, after my mother-in-law's issues the past year, mom said she never wanted to be that way. If she was meant to live, she would, if not, God would take her. He finally conceded and gave me the papers to sign. I stepped into the hall, tried to call our older children and our minister. The older ones arrived just after Mom passed. My oldest son was devastated. We were all heartbroken. My husband almost screamed. The minister finally arrived and we prayed together around Mom's bed. Twenty minutes, from her smiling and joking to her death. Just twenty, short, minutes.

I was in a daze through the funeral preparations and more. Mom was buried on December 20. Then, I had to find a way to have Christmas. And we did. It wasn't the usual bright, happy holiday but we got through. I had many days of tears but kept them to myself. I had children to worry about and how they would get through this. I felt like I had killed my mother because I didn't allow "extraordinary measures". It took weeks for me to feel at peace with the decision and my loss.

But on the bright side, 2004 was a good one for my husband health-wise. He worked a full year--no hospitalizations, no surgeries. I thought we were good again.

One year to the day that my mom passed away, my mother-in-law had a massive heart attack. Unfortunately, the nursing home lost the DNR and the hospital of choice information and she was transported to a hospital we would never have chosen. When we arrived and saw she was intubated. We were angry but they insisted with no DNR they could not change it. Since my husband was the younger son, we had to call my brother-in-law in California to speak with the doctors. He had to fax over a signed letter giving my husband the right to decide care. Hours and hours later we were able to have her admitted to hospice and die with dignity. She hung on for four days. Each night all the kids would troop in her room to say good-bye and each morning we would start again. Finally, on the 21st she peacefully passed away. We buried her the morning of Christmas Eve and managed to celebrate a quiet holiday for a second year in a row. The kids were not as devastated because they had seen all their grandmother had suffered and knew her passing was a good thing for her.

As we came into 2005 I hoped we could get by with few problems.

But that wasn't to be. Regular annual testing again showed that my husband's bypasses were failing. His cardiologist recommended another round of EECP - so we started another year with six months of disability.

After that six months, he returned to work but he couldn't handle it like he had before. The doctors told him he would probably need bypass surgery again but that there were no guarantees.

The rest of 2005 was, thankfully, uneventful.