Sometimes Getting Angry Works - And Boy Was I Angry

Sometimes Getting Angry Works - And Boy Was I Angry

0
Here's an update on the Home Instead Senior Care fiasco we've experienced.

Although I was promised a phone call by end of day Tuesday, it never came. After a round of phone tag on Wednesday the owner of the franchise finally connected. This after I left her an extremely angry voice mail - in response to a flippant voice mail from her when I missed her call the first time. It was epic my voice mail message. Let this woman have it, both barrels.

Yet she was still all la-dee-da about the situation. Tried to make it my fault for "not understanding" that they were the experts, knew what they were doing -- very don't worry your pretty little head. Oh and she called the next day, that was soon enough. I pointed out her staff person had said I would be called that day (Tuesday) not the next day (Wednesday) and it was brushed aside, she called me back that should be enough.

Took over a half an hour of heated pointing out that they were coming into MY home and that I was also the client, not just my mother therefore I had every right to know what the hell was going on in my own home. Never got an answer as to why I was never notified of the first incident on last Thursday as she kept trying to tell me I called before they could tell me about Tuesday. The hell with Tuesday! Then she tried to tell me that after the first week they ALWAYS contact the family with an update. Really?? Thursday was the end of the first week and no one called, sent an email or text. No task sheets left. Nothing. And she acts as though this is all normal. Then tries to tell me that with dementia patients they don't leave work sheets/a binder - five minutes after telling me that they do per the contract. Oh and they don't use diversion techniques with dementia patients until AFTER the person has gotten used to having the caregiver there.... okay, so how is the dementia patient supposed to settle down and "get used to it" without gentle redirect when they get upset? No answer.

I pointed out that I need to know of problems and behaviors so I can discuss them with Mom's doctor. The response there was "oh". I reminded her that had I known of Thursday's issues I could have worked with Mom over the weekend to offset concerns. I was told that she expected I would do that anyway! I suggested getting me a photo of the caregiver to have so I could better remind Mom who she was. Gee, she never thought of such a thing!

At the end of it all I demanded that they leave the binder, that I be notified the day of service of how it went. She agreed to email me -- or have someone email me. Made a huge point of getting my email address. So today... she sent a text. But at least she sent something.

Tuesday night I threw a HUGE fit at home. Made a point of doing all the cleaning that the caregiver hadn't done and made sure Mom knew I was up well passed 11:00 to get it all done. Was furious and do admit that I did take it out on her. Was in tears a lot. But it all got through that I need help around here. Last night after work I was still exhausted, still so stressed as to be in tears a lot but was able to more calmly make the point that I need the help her and that she needs to let the caregiver be here and do what needs to be done AND stay the whole time.

So things went well today. The binder of chores is here, with notes and a photo of the caregiver in it. I got a text report. But they are on notice and they know it. And the service had better NOT slip back. 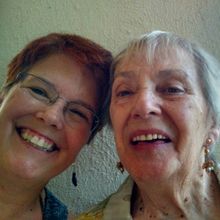 Good for you, Cat! I would also be interviewing other agencies and telling them of the issues with the current one (without mentioning names). Then you'll be ready to immediately make a change if things don't go well.

So sorry your progress takes such extreme measures. But glad to hear your standards are being met today, and thanks for sharing that great photo of the two of you.