Sometimes Joy Can Make It Worse

Sometimes Joy Can Make It Worse 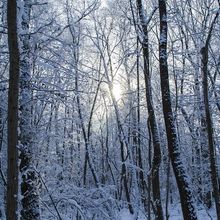 Yesterday was one the good days, a wonderful day filled with all the things that life used to give me that made me happy.

Until the day this May that my 58-year-old husband was felled with a stroke and became a shadow of his former self. Then those fun days disappeared.

My wonderful day yesterday was filled by my daughter and grandson, Jack--a trip to forest with my pet Finnegan, where the the three of us frolicked in the snow and woods like so many times before, so many winters before. Only one person was missing. Grampa. The one who would run ahead and shake the trees and sprinkle snow on a delighted Jack, the one who would pretend the forest creatures were after us, the one who made it so fun.

And then there were three. We did the same things on our walk through the forest as when my husband was with us until Jack would say, "Oh, Grampa would get me really good with this tree." Or, "Remember when Grampa did so and so". So the joy of the moment was somewhat diminished, although it shouldn't have been because the memory of it is still there, nothing can take away that past. Who am I to say it may never happen again?

But by then, the magic will be gone for Jack because he will no longer be thrilled as small children are, the dog may not even still be with us when and if he is ever able to make that trek again.

So today I am left with the what ifs, the maybes, the hopelessness, of a time that may never happen again. Is this raw pessimism? Of course it is, because this is raw and fresh and hurtful and so, so unfair. Of course I want the joy, any joy I can get in this nightmare that I now call my life.

But I also realize that for me, today, the day after such joy, that it can make what I have lost seem just so much intense.

I will try that sally, it was a great day

It's the wonderful memories that keep us warm when reality sets in. We have to learn to live in the moment but it's hard to do when you want that person back to the way they were with us. When the \"sads\" creep in have a good cry. That's what helps me. You are doing a wonderful job for your husband. Keep up the good work!

Louise, this is a beautiful piece, and you express a difficult feeling so well - the MOST joyful moments are sometimes robbed and become sad ... I understand. And you're doing a good work. Keep expressing, keep caring, keep on keepin' on.

It's so hard, Louise, to live in a life you don't want. \r\n\r\nIt sounds like you had a day that felt like a break, that felt like what normal was. That break feels soooo good. And, then, you go back to reality--a reality that you don't want. I think it's normal you would have a down day after a good day.\r\n\r\nKnow that a taste of a good day means that more good days are in your future. You've come a long way, Louise, in a short time. Keep going.

Louise, I thought of you when I posted my inspiration today, which is \"A bend in the road is not the end of the road…unless you fail to make the turn.”-Author Unknown. Life gives us many bends in our road.Sometimes we miss the straight, open highway, but the bends are what give us the opportunity to find our strength. For me, I find thinking to myself \"what if what is happening to Rod, was happening to me? How would I want him feel?\" That helps me keep things in perspective and helps me make that turn in the road to follow my life where it leads. How fortunate you have a grandson to romp with in the woods. These times of exploring the woods with him are your bend in the road. I hope you steer into the bend with joy.