Sorry Dad, I Need To Be The Bad Guy

Sorry Dad, I Need To Be The Bad Guy 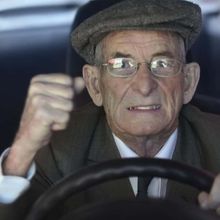 I still remember the call from my mother. "Your dad was in another accident." This time, while trying to park, he overshot the space, went over a curb and the car landed in a ditch.   Someone in a nearby store called the police and they came and helped him out of the car and drove him home.  Thankfully, he was not hurt and no bystanders were hurt.  His car sustained minor damage which at the time was not a blessing.

This episode occurred after about a year of trying to convince him not to drive anymore.  It came after a year of cajoling, reasoning, having his doctor talk to him and even taking him to a driving evaluation expert who said in no uncertain terms - "get him off the road." It came after offering every possible option including gift certificates to local taxi services.

It also came as he was in the midst of dementia and his judgement was greatly diminished.  His reply to everyone who talked to him - "YOU ARE CRAZY.  I am fine and I am a great driver."

This last phone call from my mother caught me in the middle of a busy day at work with a lot of other stresses going on.  I dropped everything I was doing and drove 1 1/2 hours down the Garden State Parkway to make sure he was ok.

When I walked/stormed in the door he was calmly sitting in his chair like nothing happened.   He couldn't understand what the big deal was.  So - he didn't park great, and the police had to take him home, why was I so worked up?

I'm not proud of my behavior. I started crying hysterically  and lost all semblance of reason.  I yelled at him and asked him what if a child was playing on the sidewalk and he killed the child when he overshot the spot?  What if it wasn't a ditch he rolled into, but one of the storefronts and he killed the people inside?

Not too soon after this, my parents agreed to move into an Assisted Living facility 1/2 hour away from me and my father gave his car to one of my sons.  I'm not sure he ever forgave me for forcing the issue of him not driving.  Although I know it was the right thing to do, I'm not sure I'll ever stop feeling guilty for this encounter.

My guest this week on my podcast "On the Frontlines of Caregiving" is Penny Patnaude and we tackle this very tough issue. Penny is the owner of the Caregiver Strategist, LLC, a Certified Alzheimer's disease and Dementia Care Trainer and is going to be a presenter at the Third Annual National Caregiving Conference. Although there are no easy answers, Penny provides a step by step approach to handling this issue and gives really helpful tips.

Penny even tried to ease some of my guilt, which I am profoundly thankful for...