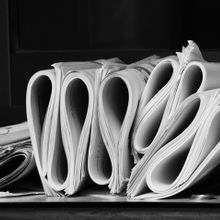 Years ago my dad made the decision to make me his medical power of attorney. When his fall at home last summer morphed into a severe infection and resulting hospital stay, I had to step in and step up. That hospital stay turned into a lengthy rehab stay, and then led to Dad relocating 800 miles to an assisted living facility near me, followed by his sudden, unexpected passing just one month later. In addition to making medical decisions for him, I also took over his bills and other finances. (As a side note, unfortunately when Dad put together a will and medical power of attorney documents, he did not also assign a financial power of attorney,  or do a trust. Knowing what we know now, those would have been good choices. But that's another blog for another day!)

I have to admit I am pretty spoiled, and have been my whole life. I was definitely a "Daddy's Girl," and although my husband is quite different from Dad in many ways, there are two ways they are similar--both able to fix pretty much anything, and both very good at spoiling me. Considering I am good at breaking things (!) and I like to be spoiled (?), I've considered myself very blessed to have had these two men in my life! I am embarrassed to admit that in my 49 years on this earth, I have paid very few bills and have paid very little attention to most financial matters. Dad or my husband have always managed my finances. Pretty embarrassing coming from a college-educated corporate professional, but it is the honest truth. My single girlfriends (either divorced or widowed) always yell at me about this. So, when I needed to take over Dad's finances, I saw this as my opportunity to learn and prove that I could do it. Overall, his situation was pretty easy. He was not a vastly wealthy man but overall he had no debt, house paid off, two older cars (paid off), adequate savings and a reliable income of social security and a small pension that were auto-deposited into his (one) bank account each month. So, "managing his finances" would pretty much entail just paying the electric, water, etc. each month. Or so I thought.

During Dad's initial hospital stay, my brother and I pretty much ransacked his house, looking for documents. We found all kinds of stuff--several insurance policies (some from the 1950's), pensions, stocks, bonds, mortgages of homes from years past, car titles of cars long gone, canceled checks & bank statements from 1970's-current, insurance policies, tax records from the 1950's to current. Yikes. My husband previously worked as a certified financial planner so we called him for advice on what to do with all of it. It was a pretty simple response: "Burn or shred those old bank statements and canceled checks (keeping the last seven years) and bring me everything else!" So, I borrowed an extra suitcase from my brother and hauled a roller board full of paper onto my return flight to Texas. By the way, paper is heavy! And scar--it felt like I was rolling Pandora's box behind me as I walked out of the airport to my car that night. I was overwhelmed at the thought of what I might be getting myself into for the next several years!

A few days later, my husband spent at least four hours at our kitchen table, sorting through the contents of that suitcase.  He then handed over to me a couple of large bags of paper to put in the shredder at my office, and two large accordion folders. In the folders, there were individuals files labeled things like "Car insurance, "Pension," "xyz Life Insurance," "Utilities," etc. On the outside of each file he had written lists of things I needed to do--call xyz life insurance company and find out if the policy is still active, what is the cash value, etc. During breaks at work, I started making the calls. Slowly, I was learning. And slowly, I gained confidence. I had Dad's mail forwarded to my house, and the yellow forwarding labels would catch my eye each day as I glanced at the stack of mail that my husband carried into the house (yeah, I'm that spoiled--I don't even bring in the mail!). I noticed over time that I stopped cringing when I saw them, and I actually became rather excited when a new "something" arrived! I set up online accounts for most of his stuff and switched his bills to auto-pay, much easier than writing checks or calling with his debit card number, and it was easy and convenient to monitor his cash flow online. I built a large, multi-tab Excel spreadsheet of various Dad-related things during his illness (doctors, medications, assisted living facilities I was researching, my expenses and my brother's, etc.), so I added tabs for his expenses and various accounts as well, including logs of the various phone calls I had been making. As bills came in, I would log them and determine if I needed to send a check or if auto pay had already covered it. The chaos was becoming a simple routine. I felt like I was upright and moving forward, I was gaining control. I can do this!

And just as I had it figured it out, Dad left me.

People say all things happen for a reason. Maybe, maybe not. I'm not sure what I believe. But if it is true, I would initially say this happened so I could take care of Dad. Perhaps instead, it happened so I could gain the confidence and knowledge I needed to care for myself, instead of being dependent on someone else. Who knows. But overall, his unexpected death left me feeling like I had spent all this time and effort training for a marathon, only to show up on race day and learn that the race had been canceled. I haven't yet been able to find solace in my newfound knowledge and confidence. Maybe someday, but not yet.

Thanksgiving week during The Purge at Dad's house, I found an old Reebok shoebox in a large ratty cardboard box in the basement, stuffed in between some moldy National Geographics and dusty glass jars. Ah, this probably held a pair of my high school volleyball shoes back around 1982-1983! I opened it and discovered it was full of musty paperwork, mostly invoices, envelopes, and hand-written notes. Sorting through it, I noticed medical bills and other things addressed to my grandmother (my mom's mom). And each envelope had that familiar yellow forwarding label. Oh, now I remember! Back when I was away at college, my grandmother's health declined and Mom stepped into the very same role that I had held for Dad. A rush of guilt suddenly swept over me. As a self-absorbed young adult, I vaguely remember those days, but it never once occurred to me what Mom had shouldered. She had four siblings, but none of them helped her. My dad, a river boat captain back then, was gone from home for four to six weeks at a time, and could only call home once every two weeks or so when he could get to a land line. So, she was on her own, having to figure out all the same stuff that had been on my plate, without an ounce of help. And she did it, and I must say, she did it well. I unfolded a carefully folded legal-sized yellow sheet of paper and there was a hand-written spreadsheet of sorts, the manual version of my Excel spreadsheet, in Mom's beautifully-scraggly handwriting. Logs of expenses, bills, phone calls--all the same stuff that I had on my electronic version. It suddenly occurred to me that all of that work that my mom did to care for her Mom, that very few people ever realized or appreciated her for doing, was reduced to a pile of moldy old papers in a cast-off shoe box, abandoned in a damp, dark basement. Humbled, I sat down on the dirty basement floor, and I cried.

I cried because I felt ashamed of myself for being so self-absorbed, and for lacking courage.

I cried because I am not sure I was ever "there" for Mom.

I cried because I was overwhelmed by the feeling of blessedness--for having two parents who despite some pretty serious quirks, cared and tried. For having a husband who takes care of me, regardless of my awareness or appreciation of his efforts. For having a loving brother who has always been my hero. For having two kids who, as teens, are so much more supportive and aware than I ever was.  I am not worthy.

I cried because sometimes life Just. Does. Not. Make. Sense. And then the very next moment, it smacks you right upside the head, providing perfect, unfiltered clarity.

I cried because I hadn't cried since Dad passed away three weeks prior and it just needed to come out.

I had some new bills come in the mail yesterday, so I updated my Excel spreadsheet today. And I thought of Mom, and thanked her for all she did. And I cried.

Another amazing post, TBD. I admire you for allowing yourself to feel these feelings, the hurting ones as well as the thankful ones. Your talented and resourceful parents modeled well for you, and now Here You Are, doing all the things they taught you without saying it.

Awe, this brought tears to my eyes. I was there with you on the basement floor. I had a similar realization about my MIL. I realized after her death, after caring for her, what she had gone through after her husband died. She had cared for her mom, then her husband who battled cancer for 5 years. When he died, not only did she lose the love of her life, but she lost her daily routine, her purpose. I felt lost when she died--I didn't know what to do with myself. I was fearful of the future without a job, etc. I felt bad I'd been so critical of her, for not getting back out into the world.\n\nI think we all come to realize things later than we'd like. It seems to me that you are a pretty good human being and would surmise that your parents did a pretty good job. I think they both understood you... understood your age, your stages in life... sometimes we just have to walk in those shoes before we truly understand, connect. And sometimes that makes me sad, too.