The line that stays with me is my partner's admission that her distrust of the plumbers and their motives had probably been due to her various "pressures" -- from dealing with her MS diagnosis to family history issues to new changes such as her taking Synthroid. In short, she said she realized that she had been "taking DIY to an extreme."

This is also a day in which she thanked me for supporting her. She added that she was wary of leaning on me too much.

I said I was fine with being a support and sounding board. I added that things get hard for me when I think she's gotten worked up about one thing, when really it's another thing making her upset. (I didn't say aloud that she gets particularly hard-headed at those times.)

Take our two toilets, for example. (Well, the plumbers already did.)

My partner left this note on my desk this morning: 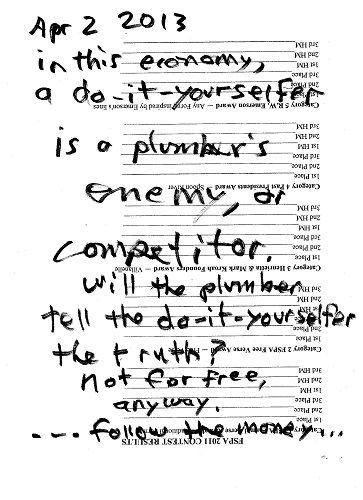 Frankly, it was time for the toilets to betray us, aided by 33 years of calcium and lime build-up. According to the plumbers we'd gotten an extra 10 to 15 years out of them. In the meantime, my partner has devised various DIY work-arounds with bottle caps, paper clips, cheesecloth, and scraps of plastic tubing meant to make up for parts that are no longer made.

I missed my chance to photograph her handiwork inside the tank, darn it. For one thing, it was much more elaborate than this: 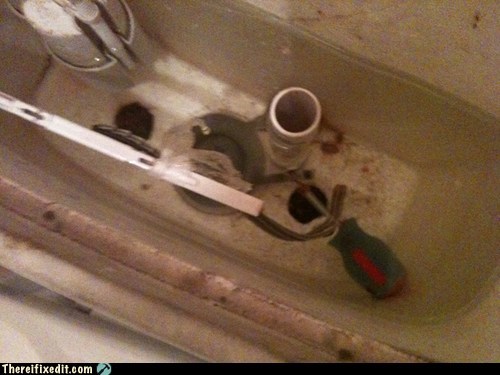 I could have taken a shot of her kluges and uploaded it to ThereIFixedIt.com. (Note to self: next time.)

But I did get her drainage hole numbering scheme: 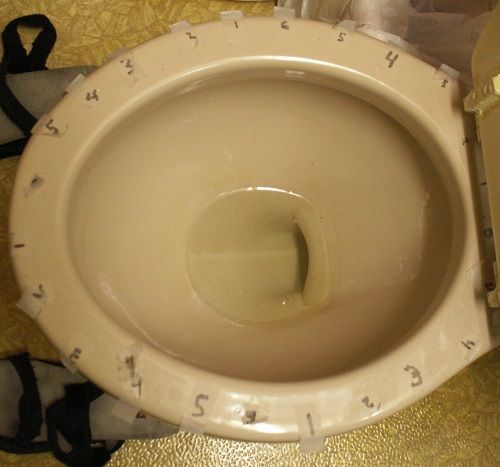 (The irony doesn't escape me of trying to combat lime buildup with the help of a lime juice bottle. But I digress.)

Anyway, our hallway bathroom toilet crapped out first, literally. It could still handle liquids, but not solids (including toilet paper). Our water conservation practices include the "If it's yellow, let it mellow" dictum, but my partner wanted a number system for that, too: 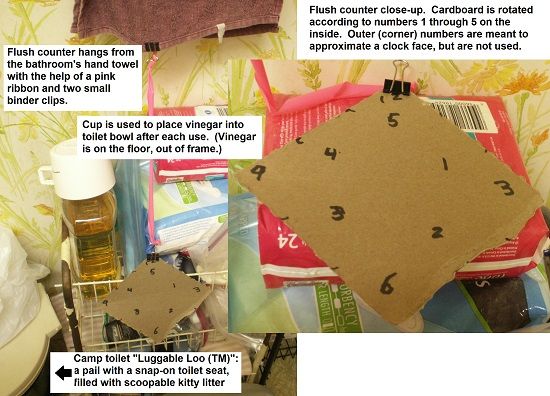 By "flush counter" I really mean "pee counter," since my partner wanted the toilet flushed after every five pees.

I snaked the hallway bathroom toilet on January 13. The build-up had become so hard that I wondered if a can lid might have accidentally dropped down there. It's conceivable that a can lid could fall down the toilet because my partner wants to save as much gray water as possible to use in toilet flushes. Sometimes that means murky water gets transferred from our kitchen sink with the possibility of a can lid stowaway.

We still had some drainage, hence the flush/pee counter. A similar counter went into the bedroom bathroom, which could still handle solids, at least for a while.

That "while" ran out last week. I again took snake in hand for part of Easter Sunday. To then clean the snake, my partner insisted that the used portion be wrapped in paper and the snake transferred from the bedroom bathroom toilet to the hallway bathroom toilet. I would then snake that toilet again to "rinse" the already used portion in that toilet's clear water.

I tried arguing against this method -- citing everything from spills to metal forcibly uncoiling in transit -- but my partner was adamant, to the point where we measured out the amount of snake that I could get through by having me hold the snake and my partner hold a yardstick several inches away and parallel to it.

My partner makes Rube Goldberg look like a slacker.

Fortunately, no mishaps occurred during the transfer and nothing icky turned up on the snake. Also fortunately, we had our camp toilet.

My partner has drawn on the inside with a black magic marker, showing her desired height for the kitty litter -- too low and you have spatter; too high and you have, er, interference. And she doesn't want the litter lying flat for use, but arranged in a conical depression. And after each use, she wants Every Single Bit Of Used Litter picked out of it, including the dust-sized pieces.

Fortunately, we have a good supply of latex gloves.

Getting the plumbers here was a stroke of luck (they happened to be in our vicinity when I called), once my partner had exhausted every theory she could think of, including one that divided the toilet's pipes into two distinct drainage pathways (she could swear she felt two holes), leading her to construct a rather adorable model out of pipe cleaners. 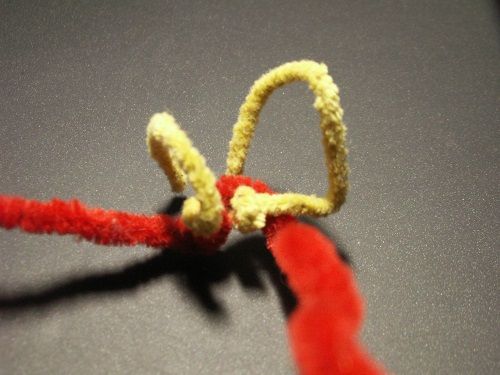 She showed her pipe cleaner model to the plumbers, arguing her case. The plumbers said the toilet probably had been made with a bad mold. That wouldn't surprise me, considering that the house has had toilet troubles since it was first built in 1980, judging from the letters I had received from my mother during that time.

My partner was still worried that the plumbers would betray us in their quest for money. She asked one of them to count the drainage holes in the new toilet, which he did out on our lawn while the Beatles' "A Day In The Life" played in my head. ("I read the news today oh boy / Four thousand holes in Blackburn, Lancashire / And though the holes were rather small / They had to count them all / Now they know how many holes it takes to fill the Albert Hall.")

Twenty holes were fewer than the ones my partner had counted in our hallway bathroom (24) and bedroom bathroom (26). She was happy for the lesser number, which made her better disposed to the idea of toilet replacement. She had been trying to convince the plumbers that she could clear out the calcium/lime build-up if she worked at it long and hard enough.

This time I was adamant. We were getting new toilets, I said. I did ask the plumbers if there might be blockage farther down the pipes. Our neighborhood includes a fair amount of timber, including the trees in our yard. My partner suspected tree roots as the culprit.

The plumbers said that more blockages would cause water to back up in the pipe beneath the floor, and they'd see it when they removed the old toilets.

Both pipes leading underground were dry. No blockages there.

The only upselling they tried to do with me was to say that for another $60 they could put in a "handicapped" toilet whose seat rose two inches higher. My partner usually complains that ordinary seats are too high for her, so I declined. (She thanked me for that.) In fact, the plumbers warned me that replacing the old blue toilet with another blue toilet would cost considerably more.

I don't give a crap what color the toilet is, just as long as it works when I do give a crap.

The bottom line is that the plumbers weren't focused on only the bottom line, as I informed my partner. I've used this company before, and in my book they're good people. They were also very patient with all her questions (and mine), and for this particular job they were getting a flat fee, not being paid by the hour.

First my partner wanted to keep both of the old toilets, so that she could inspect them fully for herself. I convinced her to let the plumbers take them away, which was also part of what we were paying for. (She made her inspections out on the lawn.)

Then she wanted to keep the tank lids, in case the new tank lids ever had to be replaced. I could see at a glance that one would not fit the other. My partner wasn't convinced. I got out my measuring tape and measured them. The old lids were rectangular in shape and measured 21 inches across. The new lids were trapezoidal in shape and their widest side measured 19 inches across. I told my partner, who took the measuring tape and then an old lid and confirmed my findings to her satisfaction.

She agreed that the tank lids could go, too. Yay! :D

But she wanted to keep the old seats. I could live with that. I removed one. She tried to remove the other, but couldn't get it to budge. One of the plumbers removed it, so that we could have it. :-)

My partner has awakened as I've been writing this and got to work attaching her drainage hole numbering system to the new toilets. She made sure to tell me that the plumber counted the holes in the toilet wrong. It doesn't have twenty drainage holes, it has twenty-one drainage holes.

"I don't know why they put in an odd number like that," she said. She added that she had initially under-counted the drainage holes in the older toilets, and had finally gotten the correct number with the help of a mirror.

"And I have a guess as to which hole he missed, too," she added, showing me with her mirror how the holes did not line up exactly. Then she theorized that maybe that offset had been deliberate, to avoid certain kinds of wave action. (Update: She now tells me that the other toilet has 20 holes.)

I believe our Toilet Saga, at least this chapter of it, is finally coming to an end. Just about every time a decision like this has to be made, I gird myself for hours (days, weeks) worth of (a) theories, questions, and minutiae, presented (b) frequently, painstakingly, often slowly and with many words, and accompanied by (c) some degree of emotional upheaval. For me it's the verbal equivalent of water torture. :-)

My partner has now come in to tell me that she wants to paint over what she sees as defects in the ceramic (e.g., little depressions in the shape) with nail polish remover, to stop organics from becoming lodged there. After some discussion, I think she has decided not to do that after all, since fumes from the acetone in the nail polish remover might rise up to the tank and compromise the gasket. Instead, she wants to map where the depressions are, so that we can keep track of them.

Maybe this chapter in the saga has a few more pages to go...