Steady as She Goes...

Steady as She Goes... 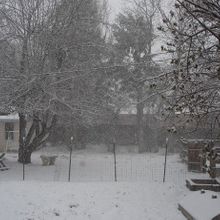 We've entered a nice, stable time in our journey, I'm very happy to say. It's not that everything is suddenly easy, but it's not the day to day crazy difficult times like it was for a long time. Mom and Dad are used to their apartment. Their old house is sold. Mom has friends and a doctor who is brave enough to wean her off her benzos. While she's not off yet (it's a very, very slow process, she's down enough that I can see the difference in her behavior. She's actually nicer.

Now, being the start of the New Year, I feel it's my turn to try and meet this challenge. Can I be nicer, too, and forgive her for who she has been all these years on the drugs? Can I somehow drop the lifelong habit of being on edge around her because I never knew what she would be like? Will this change actually last more than a few days/weeks?

We had a lovely Christmas gathering at our house with all our kids, grandkids, Mom and Dad (the Great Grands), my brother (who stayed with them while he was in town, giving me a total break), and two of my cousins. I made lasagna, fresh spicy cranberries, and others brought salads and desserts and wine.

About two hours into our gathering, my sister called from California. Her son, who lives in the same city we are in, could not find a space at the homeless shelter and was on the street with his 4-year-old son. Did I know anywhere he could go for the night? I had invited this nephew to our gathering, but had never heard back from him. What could I say? I told her to let him know he could come to our house for the night.

My husband was furious. We had quiet conversations in the kitchen while the others visited. My parents didn't know their grandson was homeless, addicted to pain killers, and awaiting trial for breaking and entering and stealing nearly $1000 worth of cash and electronics from his sister (the one with cancer). My sister didn't want Mom and Dad to know. Our house is small and, while my parents stayed put in the living room, our kids tended to be back and forth....thankfully. It made it easier to have a discreet family meeting.

It was awful. My husband kept saying he didn't trust my nephew. He wouldn't sleep if my nephew was in the house. My daughter started into a panic attack. I just kept saying over and over, "It's Christmas. He has his son with him. It's snowing. It's cold."

Eventually, everyone left, having had a lovely time. I don't think my parents noticed anything was amiss. My brother, who is a newspaper editor, accidentally left his good camera at our house. Our daughter took it to her bedroom and promptly locked herself in. I called my brother via my cell phone to let him know he had left it. While I was on the phone with him, our home phone rang and my husband answered. It was my nephew, letting us know he was on his way with both his son and his stepson. I could hear my husband's tone of voice. After we both hung up, he told me he had made sure my nephew knew he wasn't happy. I reminded my husband that it was Christmas.

I got the room ready and waited. Our oldest son had promised to be on call and could be at our house in minutes, if we needed him. I didn't expect anything to happen. I know my nephew has been working with a crisis center and is trying to turn things around. I also know he loves his son and step son. I put on the water for hot chocolate and got out the gingerbread cookies.

Two hours later, my sister called again. Seems that, while my husband was on the phone with our nephew, his social worker was listening in. From the call, she determined our house would be a "hostile environment". She managed to get a hotel room for them for the night.

Maybe things with Mom and Dad were just going too smoothly? Maybe the universe thought we needed another challenge? My sister did not hold anything against us. My nephew's situation hasn't changed -- he has a hearing in a couple of weeks. I think the social worker made the right call, but I'm so sad we couldn't do this for him... and for my sister.

The good news is that my niece is halfway through her radiation treatments and is tolerating them well. She'll start chemo sometime after these treatments end. And my parents are doing well.

Yeah, when the evening was over, I knew everything had happened the way it needed to happen. It was just awfully hard to hear my sister say that our house was considered hostile. It was hard to see the real hostility come out of my DH on Christmas. It would have been impossible for me to say no to my sister when she called. As much as I struggle with spirituality, these are the times when I think, what is our responsibility to other human beings? I know we can't help everyone, but this was family. My Dad was the kind of person who would help anyone who asked for help...anytime.

Goldie, how great to end on a high note. I hope everything calms down for you in this new year.

It strikes me that the universe intervened to keep the steadiness. I don't think it's a coincidence that you were on one phone while the other rang. We so want to help and be available. It seems that this wasn't the right time for you to step in and help. But, oh, it's so hard for us to know when the right time to help is and when it isn't. Thank goodness your sister understood.\r\n\r\nI've got my fingers crossed that the waters continue to stay calm.

Goldie, I would say that I agree with you, the social worker did make the right call. This is complicated; let the professionals handle the details. Best solution for you and your immediate family. What a situation. It sounds like a made-for-TV movie. My hat is off to you for your wisdom and compassion.