jan
Last night I watched the movie, Still Alice. It sounds morbid, but I bought the novel version in the Charlotte airport while flying home to my mother's funeral in August. I wanted to read the novel while my mother's dementia behaviors were still fresh in my mind. I realize the novel encapsulates years of normal decline in a short time in order to progress the story line. But it was incredibly insightful and it gave "some reason" to behaviors I could never comprehend from my mother's point of view. I wrote to the author, Lisa Genova, to tell her how much I gained from her insights; her assistant, Karen, replied almost immediately to thank me.

Enter the movie. Another well-meaning opportunity "sanitized for your protection". In spite of that, another opportunity for the general population to have an excuse to turn away and leave current caregivers abandoned. Few caregivers here would have trouble relating to that movie except in degree. We know it's just so much much much more in every way than presented there.

The critical element about the movie and its message is a subliminal one. As the movie progresses, Alice becomes more and more disheveled, culminating with constant red-rimmed eyes, no lipstick, ruddy skin, wild, unkempt hair. Is this the only way Hollywood understands how to visually portray someone with a mental disability? Anyone caring for a dementia patient knows the caree's appearance is only limited by the caregiver's care. It is one disease that hides for many years, only effecting the appearance (in my mother's case, making her physically unable to smile at the end) when the caregiver chooses not to continue the caree's normal beauty routine. It was a challenge to convince people who saw my mother that she was ill. I kept her coiffed, clean and as close to her accustomed beauty routine so no one had a clue there was anything sinister lurking underneath. If Alice, in the movie, starts looking "Hollywood Crazy", it's because that's what we have come to expect. I doubt her loving daughter, who becomes her live-in caregiver, and an actress who understands the importance of appearance, would allow her mother to degrade in her looks. The family certainly has the monetary resources and Uptown Chic to keep her appearance in style. It would have to be a matter of choice NOT to do it unless Alice herself rejected that care.

It doesn't help to continue false stereotypes about mental health issues when we family caregivers look for support and ways to resolve abandonment, isolation and loneliness. 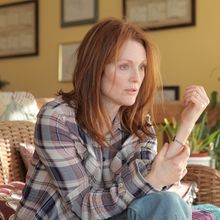 I haven't seen the movie yet, maybe ready to now, but what an excellent analysis, Jan. It would be more accurate to display the caree well groomed and the caregiver a hot mess!

Jan, what a thought provoking blog. My father had dementia for the last two years of his life, but my mother did not. I haven't read the book or seen the movie, but I wonder if I would have fallen for the disheveled look as being a true depiction of the disease. Continuing along your train of thought, my mother was almost 95 when she died. For the last 4 years I was her caregiver, caring for her in my home. Due to severe arthritis in her hands and shoulders (among other places) she was in continuous pain, unable to move, bathe or brush her hair without help. We made sure that every day her hair was combed, when she became too ill to take her to the salon, I found a wonderful woman who would come to the house to cut and perm her hair. We did her nails, made sure she had pretty clothes. As you stated, it was hard to convince people of the enormity of the caregiving needs when she looked and acted so well. Not only do your comments_mysql apply to mental health stereotypes, I feel they apply to an even wider circle of caregivers whose care of their loved ones causes them to \"look for support and ways to resolve abandonment, isolation and loneliness\" as you so eloquently state.