Still Paying for It

Still Paying for It

John Parks-Coleman
I've told you quite a bit about some of the things that are going on in the life of the Parks-Coleman Family; and, a lot of the posts are focused on something that happened, which resulted in a trip to the ER or a visit from the friendly neighborhood super heroes (read as fire fighters). I'm going to share something with you, now, that I shared with Yvonne prior to our marriage. 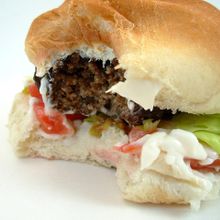 Memory loss, in its various forms, can sometimes be very selective about which memories it takes.  Now, there are a lot of great memories that still remain with Yvonne, some of which she loves to share with me (in a hard-love kind of way). This is one of those memories.

The day was 05 May 2008 and Yvonne and I had just run into each other, again, on a trip to Fort Sam Houston.  We were both attending appointments at BJACH, on Fort Sam and we were on a bus. I didn't recognize her from our first meeting (in Bosnia, 2000...this will be another post) and we began talking during a break in the road trip while the bus driver was re-fueling the tanks. During our chat, we decided that once we got settled in at the guest house, across the street from the hospital, we would meet up with some other travelers and go out to dinner that evening before we all went our separate ways the following morning for appointments.

After dinner, our small group returned to the guest house and, we were sitting under the gazebo, swapping stories, telling jokes, and generally venting about deployment-related injuries. A lot of soldiers like to tell Bull-Sh*t Stories to get the ice broken; to put a smile on someone's face when times are tough is sometimes the best medicine. What follows, just so we are clear, is the Bull-Sh*t Story that I told Yvonne on that evening.

"So, did I tell you what happened at Burger King, yesterday?" I asked Yvonne.

"Oh, man, you're never gonna believe this, it was crazy!" I began, "I took one of my Team Members out to lunch yesterday when our mission was completed and since it was her choice of where to eat, she chose Burger King."

"OK, so, what happened?" Yvonne was still a little indifferent to the story.

"Well," I began, "we had just left the motor pool and when we got to the Burger King, I gave her $20.00 and said to order the #5 for me, order whatever she wanted and I would join her after washing my hands in the restroom."

"Good hygiene, John, your story is pretty boring..."  Yvonne was starting to look bored, time to reel her in...

"While I was in the rest room, I started hearing a lot of yelling, and A LOT of foul language", I said, "and I recognized the voice of my Soldier, and she was really going off on someone! So, hurriedly, I finished up and raced into the dining area." Yvonne was starting to get more intrigued. "I found my Soldier yelling at this lady who was eating a hamburger. Trying to defuse the tension of whatever started the situation, I told my Soldier that she had a phone call (this is code for 'step away from the situation and cool off). When I got the Soldier calmed down a little bit, i asked her what was going on, why was she yelling at this lady." "What happened?"  Yvonne was starting to lean forward, clearly intrigued and engaged in the story.

"My Soldier explained that she had ordered our food and once she received it, she placed the trays of food on the table and went to the condiment station to get ketchup, pepper, and straws and napkins. When she returned to the table, this lady had begun eating our food."  Yvonne was aghast, "What the hell did you do?"

"Well, being the person that I am, I did my best to defuse the situation," I started laying the BS on thicker, "I asked the lady, 'Ma'am, did you pay for these meals that you're eating?"

"No, just like I said to that Soldier, I found it -- finders-keepers!" She said between bites of burger and fries.

"Ma'am, you're eating food that I've paid for, and, I'm going to have to report you to the manager of this establishment." Yvonne was starting to look slightly irritated at the audacity of the made-up lady that was eating the made-up food.

"Well, I didn't want to cause any bigger of a scene that had already been started, so I went to the manager and explained what happened." I added more detail to lure Yvonne closer into the BS story, "The manager was this 17-year-old kid that looked confused as to what he was even doing int he restaurant but he did his best authoritative voice when he approached the lady eating our food."  "Ma'am", Made-up Manager said, "You didn't pay for the meals that you're eating. I'm going to give you two choices. You can either return the money for the meals to the gentleman whose food you are eating or I'll call the MPs and have them here to arrest you for misdemeanor theft."

"I would have been all over that lady!" Yvonne exclaimed.

"I know, but I had my Soldier to think of, not to mention I still had another mission to complete yesterday so I told the manager that there was a third option", I lay more BS on top of the pile that was the story, "I said to the manager that his third choice was that he could give my Soldier and I identical orders, to replace the ones being eaten by the lady,at no extra cost." I added, "So, the manager was a little relieved that he needn't call the MPs, and the situation would resolve itself through a kind gesture to two Soldiers in spite of the inconsiderate lady eating the food I had already paid for."

"That was good thinking," Yvonne said, "but I still would have found a way to get back at that lady."

"I did," I said, laying another layer on top of the story. "Once we got our replacement meals, my Soldier and I sat at the table directly behind the lady.  Every time she took a bite of her stolen food, we would make rude noises and call her 'food-thief'. We did this for about five minutes," I added even more detail. "We kept up until the lady was so self-conscious about the stolen food that she got up from the table and stormed out of the restaurant. On her way out, she tried to slam the door, but the hydraulic lever mounted on the door prevented her from slamming it, so she wound up making herself look even more ridiculous." Yvonne was laughing.

"Serves her right," she said. "How dare she steal someone's food...and to say 'finders-keepers'?  She must be a very childish lady to use a term like that." Yvonne was buying the BS Story hook, line, and sinker. It was time to deliver the finishing touches.

"So after the lady stormed out, I looked where she had been sitting," I said, "and I saw a large shoulder bag sitting there. So, I reached over the seat and grabbed the bag, and hid it next to me under the table."

"John!" Yvonne exclaimed, "please tell me that you didn't do that!"

"I did," I said, "and a little while later, the lady came walking back into the restaurant, looking for her purse."  I laid the final layer on top of the story, "the lady came over to my table, and she asked if I had seen a purse."

"Ma'am, was it a big shoulder-bag style purse that was black and kinda heavy?" I asked

"Yes, have you seen it?" Made-up Lady asked.

"Did it look like this?" I said, holding up Made-up purse to made-up lady.

"That's MY purse!" Made-up Lady exclaims in anger, "Give me back my purse, NOW!"

"Finders-Keepers!" I said to made-up Lady.

Yvonne was looking alarmed, she was hanging out with a made-up thief.

"So, the lady went to the manager", I continued, "and after yelling at the manager, I heard the manager tell the lady that she had just done the same thing to me and he had no choice but to not intervene since she still owed money for the meals she had stolen."

I continued, "So, the lady, red in the face with anger said she was going to call the MPs herself, and report me for theft of her purse.  fter she stepped back out of the door, my Soldier and I left through the other door and went back to my truck."

"You KEPT the purse?" Yvonne was starting to get a little angry that I had committed a minor felony.

"Dang right I did!" I defended my Made-up crime.

Yvonne asked, "Where's the purse now?" Obviously concerned about trying to coerce me to return the made-up purse to the made-up lady so that I wouldn't be detained for a made-up crime.

"What are you going to do with it?" Yvonne asked.

"I'm not sure," I answered, "but whatever I do, I'd better do it soon, because that purse is really starting to stink..."

Silence. (cricket...cricket...)  Yvonne looked at me, giving me that look that only a Woman can give that says, "You messed up, and you're a son-of-a-motherless-goat."

Finally, she took the bait...

"Lunch meat?" Yvonne asked, "You mean like cold-cuts for sandwiches?"

"Yeah, bologna, like I'm feeding you," I delivered the punch-line.

"John, you a**!  You had me worried!  That's not nice!  How dare you lead me on like that!" Yvonne began rattling off. She was partly angry and partly laughing, but mostly irritated that she had realized that the entire story was made-up.  A little later, I saw a smile on her face. "You Jack-A**," she said, poking me in the side.

Now, I've explained about the increasing rate at which Yvonne is losing blocks of memory. As I explained in a previous post, this is weighing heavily on both of us, of course, and it affects many of you reading this.

Today, while I was having morning coffee with Yvonne, she looked at me, then she looked away when she saw that I was gazing at her. She placed her coffee cup on the table, reached over and poked me in my side.

"You're still a Jack-A** for telling me that story!" She smiled.

I smiled and inside my head I gave myself a little celebration. I didn't celebrate that I had been called a 'Jack-A**', I was celebrating, in my head, because even though I'm still paying for telling that made-up story, that moment when she remembers, and pokes me in my side is assurance that many memories are still in her beautiful mind.

The bullsh*t story made me laugh out loud - I would totally have been taken in. You're a great story-teller! Love that she is laughing about it too - in her way. :-)