I used to be shaken much more frequently, like a James Bond martini.

Shaken when my partner introduced chaos into the day, like her recent use of her cooking coil as a space heater. Or when her theories ran amok. Her most recent, rather benign theory is that the plumbers had deliberately introduced a slow leak into our new toilet tank, so that the dripping water would wet and slow the curing of the grout that attaches the toilet to the floor.

(They're coming back next week. Again.)

These days I might just get stirred -- and, when safety is an issue (as with the coil), stirred enough to seek help.

My partner had been in a bad mood on Wednesday, accusing me of always having a comeback to whatever she said. Adding in her other accusations, expressed at various times, produced the following:

a) I always have a comeback to what she says when I talk.
b) I am punishing her when I do not respond to what she says.
c) "Silence means assent," so my silence also means that I agree with her.

On Wednesday she had been "shocked and horrified" (her words) when I picked up the jacket she had thrown on the floor in the natural foods store. She had viewed my action as an insult and insisted, in a mini-meltdown, that she could do things for herself.

She had been looking for an intact plastic bag in which to put oat bran from the bulk bin. (No need to use the store's bag when she could use her own, she reasoned.) Unfortunately, the bags she carried around with her had holes in them and she spent time examining them one by one. At one point she emptied out the bag she'd been using to collect trash from the ground, including cigarette butts.

"I'm not eating anything out of that bag," I said.

Her frustration at not finding a good bag had heated her up so that she whipped her jacket off and threw it on the floor.

She yelled at me to return it to the floor after I had picked it up. I did as she asked, kept my mouth shut, and meditated on a pretty wall hanging in the store -- after I exchanged glances (probably with a contrite smile on my face) with the man behind the counter. We frequent the store, and at this point I'm fairly sure the staff understands our situation.

Later she had felt bad about her public tantrum. We decided that the day's stormy weather had been at least partially responsible. Fortunately, business at the store had been slow while we were there.

My partner can switch from irascible to playful in a heartbeat. Living in the moment helps me with the changes. One moment her grievances achieve full throttle; the next they disappear like water into sand. It's as though they had never happened.

I remind myself that this is her brain damage talking. I hold myself back (most times, not all) from arguing a point, because it usually doesn't matter. The point and the argument become forgotten as my partner's mood changes. Upheaval suddenly turns the corner and becomes peace.

Bond can keep his martini. I am happy to settle for merely being stirred. 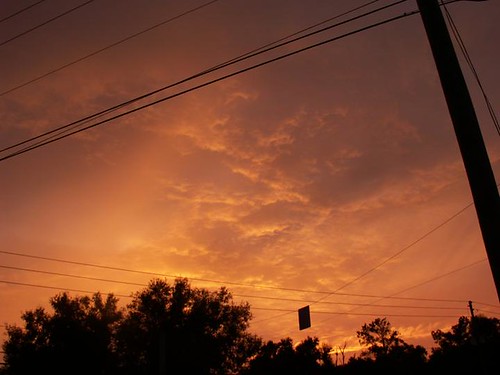 Clouds outside the natural foods store, after rain in 2005.