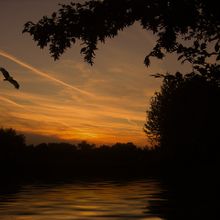 For caregivers and their loved ones the incredible beauty of a sunset is often overshadowed by confusion, distrust, and escalating stress.

Even before I had a chance to knock on his sitting room door I heard Rodger’s voice. “You better not try anything funny. I know how to defend myself!”

As startling as his words were they didn’t stop me from putting a smile on my face and slowly entering the room. It was the sight of him in a boxer’s stance with his fists raised that sent a shiver of dread rippling down my spine and stopped me in my tracks.

“I’m not a very funny person, you don’t need to worry about that,” I said, hoping my little joke would diffuse the suspicion and anxiety he was expressing.

“I’ll call the cops if you get any closer!”

“Okay, I’ll stay right where I am. You can put your fists down. I’m not going to try anything. I’m getting ready to fix your dinner. I came up to make sure you were awake before bringing it to you. I’ll go back downstairs and you can relax until it’s ready.”

“Relax, relax. All you say is relax. I don’t have to relax.” He sounded like a three year old getting ready to throw a tantrum. However, adults in tantrum mode can be dangerous.  He was sundowning and it was time to put some distance between us.

His doctor talked with me about sundowning when he confirmed the diagnosis of dementia so I wasn’t completely surprised when it began to happen. It was still very disconcerting when it occurred. At first it happened only occasionally, and then it began to happen more and more often. I never knew what set him off.  What I had learned was that confronting him with facts didn’t help. It made things worse.  I finally realized that the best thing to do was remain calm and meet him wherever he was.  Sometimes I was able to do it. Sometimes I couldn’t. On this particular day I was handling it pretty well. Not great but not bad either.

“I’m going downstairs now. If you need anything let me know.

“Food. I need food. Are you going to feed me today?” The  mention of dinner got through. That was a good sign.

“I’ll bring you something to eat in a few minutes. It’s almost ready.  I hope you like it.”

“I eat anything. If you get hungry enough you eat shit. Are you going to feed me today?”

“Yes. I’m going to feed you today.” I backed out of the room and went to the kitchen to prepare something I hoped he would think tasted better than what he had mentioned.

Two hours later, after he had eaten everything on his plate with no comment about the flavor, I was sitting down to supper with my husband when Rodger opened his door and called to me, “Hey, you going to feed me today?” I pushed my plate away and rose from the table.“Are you hungry?” I asked

“No, but I have to eat sometime. “I hurried upstairs with a snack I kept ready in case it was needed. He was waiting for me, fists up, in the boxer stance again.“You better not try anything funny. I’ll call the cops.”

By the time I got him settled again I had lost my appetite. I went to my room and changed into my pajamas even though it was barely 7:00 PM.  I was sitting on the side of my bed wondering how long it would be before Rodger popped out of his room again when my husband called to me from the kitchen. “Hey Babe, come back down here. You have to eat sometime.”

With a heavy heart I slowly descended stairs, walked to the table, sat down, and began to eat. Everything had gone cold. I won’t say what it tasted like but Rodger would know.   If you’re hungry enough you’ll eat anything.

Connect with me in Chicago! I'll be presenting at the Third Annual National Caregiving Conference on November 9 and 10.

Bobbi..so true and real. Thank you for sharing the moments that others don't get until you've been there.