jan
Thirty-two years ago, my husband and I sat at the table he had just built, enjoying our Christmas dinner. He had designed and built it on the third floor of our apartment house, known as "The House With No Paint", a wood-frame six-apartment complex known for housing seminary students in Ipswich, Massachusetts. I was pregnant with our first baby, due within weeks. As we sat, we wondered aloud, "Who will sit at this table with us? How many children will be here in the Christmases to come? How many future spouses will join us? Will it be big enough? Will we fill it?"

My husband is known for doing any job worth doing in a BIG WAY, so this table was BIG and SOLID, in addition to an intriguing trestle table design. That he could accomplish so much in such a tiny space was remarkable. That we would be pondering our future some 30 years in the future was not unusual. We were just weird that way.

So here we are in 2015 with the future as the present. We were blessed with two amazing daughters, who brought home two loving and hard-working husbands. The table hosted two sets of grandparents for them. With my mother's passing this summer, those grandparents are gone, and my husband and I are now the next generation of Mimi and Papa to the sweet granddaughter we were given this year.

As we anticipate lifestyle changes and the inevitable downsizing, we were thrilled with our youngest daughter's desire to take the table, refinish it, and use it in her home. A table that had seen so many birthday parties, traveled hundreds of miles, supported countless homework and craft projects, and united us again and again over family meals, was now going to have new life and a new story. New nicks, new dents, new initials to be carved, new food hiding in the crevices.

A year ago this week I started a blogpost that was so full of frustration and scathing fury that I couldn't even put my emotions on paper or complete my thoughts. I couldn't share it publicly; I left it unfinished in Blog Post Limbo. Caregiving for my mother with Alzheimer's was a daily unending exercise in pointlessness and anger.  I feared losing my identity in it.

But I didn't. There is real life after caregiving, and during it, even when it feels like it will never end. It will end, and grace will come. New life, new stories, will inevitably win out. Life wants to live. 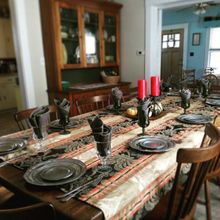 Jan, I am sitting here with a smile in my heart and on my face as I finish reading your post. Such a fine reminder of how life continues even after the sorrow of the passing of our loved ones. I love that your hubby made such a strong and sturdy table. Perhaps a reflection of the strength of your marriage and your family. I love that your daughter wants to bring the table to her family as they travel their own path. We were thrilled when we asked our daughter if she wanted a butcher block table that was a wedding present to us from my hubby's mom and dad. Our kids grew up around that table, right down to the worn spots on the chairs from the booster seats. It now sits in her kitchen just like it did in ours. Our son, too, was also pleased when his dad gave him the watch that his parents had given him when he graduated from college. It is such a comforting feeling, even though their grandparents are now gone, that both have a small piece of family history to remember them by. Thank you for bringing these good memories back to the forefront.

<a href='http://www.caregiving.com/members/janshriver/' rel=\"nofollow\">@janshriver</a>, You've just written the blog I've been thinking of but not yet composed.. life after caregiving... What a beautiful rock solid foundation for your tale. I'm so happy your daughter wants the table... those things give us a foundation when we feel we are buckling... I know just holding my dad's pocket knife sometimes brought a sense of strength and peace. I love your table and I love your thoughts. Thanks for sharing with us, my friend.

<a href=\"http://www.caregiving.com/members/janshriver/\" rel=\"nofollow\"><a href=\"http://www.caregiving.com/members/janshriver/\" rel=\"nofollow\">@janshriver</a></a>, how very lovely that your daughter is going to make her own family's memories with a piece of furniture that is already so richly imbued with your own. I read your post at the perfect time. I was seething with anger over something I felt I needed to blog about. Could I – should I -- really share such hateful thoughts?Your post reminded me not to look back at something (and someone) I can’t change, but to look forward – to new life and new stories, wherever I can find them, not necessarily where they “should” be found or where I expected to find them. I needed to hear that life wants to live. Thank you, Jan. Your posts and thoughtful comments_mysql are truly gifts for which I am indeed grateful.

Thank you Jan for sharing. It's wonderful to see how life has changed and the things your daughter has cherished speaks loudly! I am glad you have come through such difficult times with the ability to share and empathize with others. I love the table and how your daughter will enjoy the memories that come with it.

One of our members years ago would often remind us, \"Life is for the living.\" Your post speaks volumes about this. We give, we receive, we grieve, we gain--sometimes all in the same day. \r\n\r\nThank you so much for all you give here. I am grateful every day for all you do for all of us. So glad you've received your grace.