Taking Care of Me

Taking Care of Me 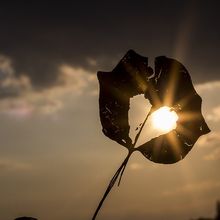 I thought my mother's death hit me hard, but it was nothing compared to how I reacted to my husband's death. The changes weren't immediate. Subtle issues began when I visited Dad in October. My hair began to fall out, my normally rock-hard nails began to chip and crack, my eyebrows began to thin, and I was gaining weight rapidly. I went from 130 pounds to 160 pounds within three months--that's a ten-pound per month gain!

Fortunately, my doctor took one look at me and ordered blood tests, especially for thyroid. He was spot on. My thyroid count was a "10," and that doesn't mean it was the best that it could be -- a 10 is fairly inactive, which meant that I had developed hypothyroidism. My doctor explained that, although I thought I was doing well, my body was saying, "Uh-oh, honey bunches of oats...we can't take any more stress!"

Thyroid issues run in my mother's side of the family, and I always considered myself very lucky to have a happy thyroid. But, the stress of caregiving my mother, that activity's effect on my marriage, and my husband's sudden death took a toll. Now, I'm working on regulating my thyroid hormones with medication. While I'm not falling asleep constantly and although my weight has stabilized, I'm still not totally up to par yet.

On top of this illness, I took a nasty fall in mid November. I tripped and landed on my knees on a storm water grate outside a restaurant in town. I didn't need stitches and I didn't break any bones, but the cartilage and muscles around my knees are taking their sweet time healing. I've stepped up my yoga practice to help strengthen my knees, but it's a long row to hoe.

When the holidays rolled around, I decided to spend time with Dad. Hugh and I had planned to spend the holidays with him anyway. Those two weeks I spent with Dad were just what the doctor ordered -- we spent two weeks sitting on our behinds watching Hallmark movies and Westerns. What a grand way to waste time!

Dad is doing alright, but I can tell that his strength is diminishing a bit. It's been 1.5 years since Mom's death, and Dad is now 85 years young. He still fishes, and he still drives. Although he put a bit of a scare into his neighbors and me this week when he didn't answer his phone for about 24 hours, he is doing great. He just decided he wasn't going to answer the phone, then he went shopping without letting anyone know he was alright. Fortunately, when I had the police go by and check the house out, one neighbor had seen him leave in the car just an hour or so prior to their visit. So, it was just a matter of tracking him down, and I did.

I'm just happy that the network I put into place for Dad is well-oiled and working. It only took 30 minutes to discover that he was alive and just missing (his defibrillator was working just fine -- a good indicator that he was alive!). It took only one hour more to discover where he was. I don't think he'll let the phone go unanswered again for a while. This little incident rightly embarrassed him, I think.

I am traveling back and forth to stay with Dad for two-week stretches about three-four times per year now. When I was there over the holidays, we did talk about what Dad was going to do in the future. I think, for now, he's going to stay in the house. I have a feeling I'll be spending more time with him as the years roll along and it may even be months before I'll need to spend more time with him. I'm still playing this long-distance caregiving stint by instinct.

In the meantime, I'm taking care of me. I'm also fixing up the house and prepping it for a new baby. My daughter is expecting her first child -- my first grandchild -- by the middle of April. Sometimes the suffering and grief we endure is balanced by a world of joy, right? So far everything is going great, and we know it's a boy.

This grandma to be is going to spoil that kid rotten.

So very glad to hear from you! Glad to hear you are on the mend. After everything you've been through, your body had to be saying \"Enough!\" Wonderful news about the bambino(a) on the horizon and so good to read that your dad is doing well. I have missed you! :)

Pearl! So happy to see you here! Thank you, dear. I do feel clumsy. My ears are ringing, my brain is cloudy, and my memory is thin...but it's all improving. Amazing how much power a little piece of one's body has over its entire function! The grandson is going to rule the house. I can feel it...&lt;3 &lt;3 &lt;3

Linda, so glad to hear from you! I was actually thinking about you a couple days ago... about your listing on etsy which made me wonder how the heck you are doing. Oh, that dreaded low thyroid and instant weight gain... and all those other symptoms... My Synthroid level needed adjusting (up) a few months after mom and mom-in-laws death. I hope it is stabilizing for you. \r\n\r\nCongrats on your grandson... how exciting! My grandkids are the joys of my life... It's also good to hear your dad is still doing well. I can only imagine the roller coaster you've been on these past couple years. I'm always struck by the time warp that comes with loss and grief... some things seem like yesterday, and other... feel so, long, long ago, even when they aren't. Again, glad you checked in and hope to hear more from you soon.

Thank you, Mar! It took me a long time to get adjusted to the news about my new grandson; but now that my daughter's feeling the movement and sharing, it's a different story. Cannot wait!