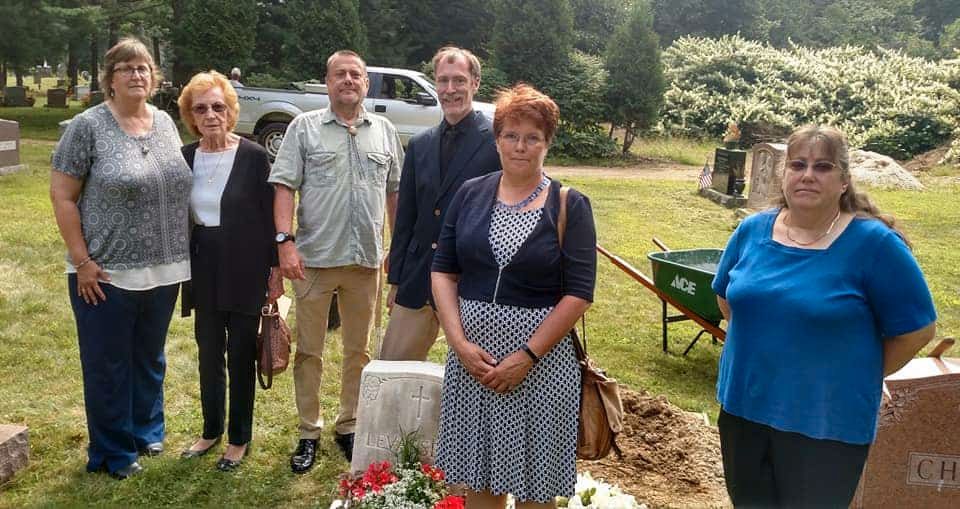 CatKBorn
It's taken me over a month to get together enough to write.

I drove Mama home to be buried Labor Day weekend. Just the two of us. Me driving, her in a white box in the back seat. I talked to her the whole way, pointed out things in the scenery. Stayed in a horrible hotel one night (Saturday)  on the way but at least she was there, sort of.

Stayed with my aunt Sunday and Monday. Had a nice dinner the first night of lobster and corn on the cob - a family favorite.

We then drove up to Maine on Tuesday and stayed that night with a cousin. Had the burial on Wednesday.

It was nice - I guess, it was only the second one I'd be to so what the heck do I know - the great part though was that we were able to have a priest from Mom's old parish give the blessing. So Mom had all her sacraments at St. Dominic's (now Sacred Heart-St Dominic's): baptism, communion, confession, confirmation, marriage, and now burial. Okay so the funeral Mass was here in Ohio but still... I was baptized at St Dominic's too so it was full circle.

Afterwards we - my aunt and cousins and I - went out for lunch and had lobster rolls, Mom's favorite. My aunt and I then drove back to Connecticut that afternoon. Thursday we went to Mystic Seaport (Mom worked there and it is one of my favorite places) and later had dinner with other cousins. I then left the next morning to drive back to Ohio.

I continued to talk to her all the way back, which differed slightly from the trip out due to construction. Ended up in Manhattan for a bit; have NOT missed that craziness. Of COURSE I needed to get from the far left lane after a turn into the far right lane in order to get over the bridge. So I channeled my "if you can drive in Chicago you can drive anywhere skills" and punched it.

The bright spot on the way back was a detour near Philadelphia to have lunch with an old friend who lives in that area. It was really nice and we were so excited to see each other and talk in person that we stupidly did NOT take a selfie or have the waitress take our picture. Still feel stupid about that.

Naturally, once I got back to Ohio I had to go back to work right away on Monday. And right back to arguing with Medicaid.

At least Medicaid paid off the care facility (all but $14). That was a surprise, especially since I haven't heard from them in weeks. Received an invoice from the care facility on Saturday showing $14 and a transaction reversal. So yesterday I called and they told me that last week they'd been paid. Still have no idea if they will pay off the hospital, still nothing in the mail from Medicaid.

I'm not crying every single day right now but as soon as I think about her, I do.

I still don't feel that I have had time to truly grieve.