Taking The Keys Away - Finally

Taking The Keys Away - Finally 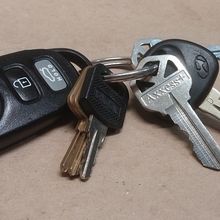 I've been away from this site for awhile, though I've recommended it to many, many people. Things were feeling pretty stable and all the routines were working. But of course, nothing stays the same forever.

I've noticed my mom's dementia getting worse lately. She's no longer able to enjoy reading because she can't keep the story in her head. She asks a question repeatedly, more than she used to. She's been losing a lot of biographical details, having confusion about how long she's lived with me, where she lived before, how long she's had the car, etc. My son has noticed it too. She still does her daily activities - more or less - and I don't feel like there is any danger in leaving her alone when I go to work. But I realized it was definitely time for driving to no longer be a possibility.

I've been her driver for the past 2+ years, maybe 3? But she has retained possession of the keys. I know of two times she took the car out in the past two years, aside from occasionally starting it up to make sure the battery doesn't die. But after a conversation with my son, I thought, I've been a coward about this too long, I need to keep the keys. So I left them in my purse a couple of weeks ago when I took her to a Bible study. She didn't miss them until Friday.

These are some of the things she's said to me since Friday:

Worse than that has been her withdrawal from me, refusing to show the affection and kindness I've been used to. I miss it so much. The other morning I had a terrible headache. When I told her, instead of her usual myriad of suggestions for remedies and expressions of sympathy, she said, "Well, that happens."

I've been sick over it, just in physical pain. I had to leave work today because I sat in my car after lunch and could not stop crying.

The good thing is that she sometimes forgets how angry she is and our relationship goes back to normal for awhile. If my son or I can get her engaged in conversation and distracted, she can forget. But when we leave her alone, the anger comes back. It is a major weakness in my personality that I find this so hard to cope with. When my son was little and had his tantrums, I could bear his anger so easily.

When she is yelling at me, I try to respond in a gentle voice and just repeat that it's because of her dementia, that I've seen it getting worse and I realize that driving would be risky for her and other people. But reasoning doesn't help. I don't know how to change her emotions.

Tomorrow she has an appointment with her doctor and I called the office today to explain the situation and ask for support. I hope that she can step in as the bad guy. But I'm dreading the trip since it will bring up the issue of the keys. . .

oh.. been there. The anger and responses of your mom sound very much like how my mom has responded to just about everything - making sure she did NOT renew her driver's license, getting them home help, allowing dad to drive HER car (even if she hadn't driven in years), moving to assisted living, moving stuff to storage. With her, the anger responses have been the norm for a long, long time (40 + years). I'm glad you have had an affectionate relationship with your mom. It's so hard for them to have their independence chipped away. It's hard for us, too.

Thanks, Deborah - I've been doing that for the past half hour. I like her approach. I only saw a clip about driving, and it got as far as saying don't be the bad guy, protect the relationship, don't disable the car because that's trickery. . . but I didn't get to what to do instead!

There are some previews of the Teepa Snow videos for sale (paid streaming or DVD) on the Pines site too. They just changed their website address over from dementiacareacademy.org\r\n\r\nMy only other suggestion on watching Teepa's videos is do it when the person with dementia is not around. Teepa is pretty darned good at roleplaying a demented person and she gets LOUD. If my Dad ever heard me watching one of her videos, it riled him up, so I had to use headphones to keep things calm.

Okay I admit to being devious here. But since the disease he had (FTD) didn't play fair, I didn't feel so bad about fighting it with a little ruse. And a lot of dementia experts will encourage you to get over the impulses you have to try to confront people with dementia or talk things out. Sometimes it's better to do what you gotta do without discussion or fanfare.\r\n\r\nI was very worried this would be the HUGEST issue I would face.\r\n\r\nMy father was a maniac about cars. Owned dozens of different ones throughout his life. Loved them so much that when stationed in the military in Germany in the 1960s when VW Beetles were popular he put his fluency in German to good use by moonlighting as a car salesmen for a German dealership and brought GIs in and sold them cars to be shipped back to the USA.\r\n\r\nI strategized A LOT before this day came and prepared in kind of an interesting way. Upon reading one of the many dementia books, I hit upon the idea of having a car key that looked exactly right for his car (a Toyota SUV) but would not fit the car door lock. We had another Toyota key that fit a pickup he had gotten rid of long ago but it was a pretty close match for the current car. Had we not had that key I would have called a Toyota dealer and asked them to send me a mis-cut or randomly cut Toyota key that 'looked right'.\r\n\r\nThe night before the fateful day came, I snuck his keyring out of his bathroom and swapped the working key for the non-working key, then replaced the keyring. Luckily I didn't get caught (he was napping when I did this caper). I locked up the right key tighter than Fort Knox.\r\n\r\nDad got up the next morning, insisted it was time for him to 'go home', packed a pillowcase full of strange stuff (as demented people sometimes do as part of 'leaving'), went out to the car and tried to open it.\r\n\r\nNo dice.\r\n\r\nDad was of course upset but instead of blaming me, he blamed the CAR!\r\n\r\nHurrah! Success!\r\n\r\nZero damage to our working relationship. Thank goodness this would be one less thing he could hold against me.\r\n\r\nI sympathized with Dad, suggested we go inside and call the car dealer to come out and make a new key. This got him to go back inside. Then I offered him some of his favorite bribes (ice cream &amp; orange juice) so he sat down in his favorite chair (setting down the strange luggage), got to work on eating &amp; drinking and watching something on TV (he could see the TV well enough then &amp; follow old movies, so I think I had popped in a DVD of Boys Town or some favorite of his). I scooped up his improvised bag, put everything away and when I had returned, of course the car frustration and the impulse to 'go home' were past.\r\n\r\nWe went through this for several days in a row. I ordered in food during that time (didn't want to risk trying to take him somewhere in HIS car) or had a neighbor pick up groceries for me. In other words I let the disease progress a bit \r\n\r\nAt some point he thought the car outside was a RENTAL car (occasionally he'd go on business trips and rent a car). So then the idea was to go in and call the rental car company and you get the rest. \r\n\r\nEventually he thought it was MY car and was happy to ride shotgun. And he said I had chosen a good car!\r\n\r\nYou may have to do more than just the key swap (like disable some other car parts, park it differently / elsewhere, maybe eventually sell it/donate it) for a really determined person with dementia. But this is a potential strategy.

How heartbreaking for you to become the bad guy in your Moms eyes! You are a courageous daughter to step in and help her , since her ability to make those decisions herself, has become dangerously clouded.