Talking His Butt Off

Talking His Butt Off 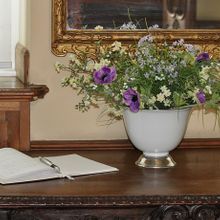 It is 6:15 am in Los Angeles and I don’t know what tomorrow will bring but every time I think about yesterday I smile and I am thankful. Yesterday was a good day.

My husband’s cousin called to say that he and his wife were in town and would be coming to see us in about an hour. When they rang the bell, I said, “that must be Sam and Betty. I’ll get the door." My husband said, “No." Hubby had a stroke five years ago and has vascular dementia with FTD. He says “no” first about almost everything and is usually very serious about not wanting visitors. I opened the door and directed our guests into the room where hubby was sitting up in bed. To my surprise, he greeted them by name, looked at the pictures they showed him and named some of the people in them, followed the conversation about family and old times with an occasional um hum and nods of his head. He even explained to me that fifty some years ago, when we visited Michigan City, on Lake Michigan, we were not in the state of Michigan but Indiana. (I’ve have had it wrong all these years.)

It is hard to explain what a big deal this is to those who don’t have a loved one who is living with this degree of language loss. Let me tell you, it’s HUGE! I said to my son later, “Your dad talked his butt off today."

Michelle, that is such an awesome moment. I love that he explained to you exactly which state you were in all those years ago. Special moment and as you said HUGE to have that language and interaction. Thanks for sharing. That's just good stuff...

I'm glad you and your husband got to experience a great moment! I know it's all about the moments, and good ones like that are a gift.

God's tender mercies are always sent to give us a breath of fresh air, to allow us to see that He is gracing us with a moment special and unexpected. I have had many such moments and they always leave me feeling loved and refreshed. What fun to have your husband involved if only for a short period of time. \r\nI find it interesting when you say he always says \"No.\" first. My husband is the same way. I think he has to process and lives in a state of low-level fear that shows up when a situation causes possible change. I often experience the same shift in him as you did in your husband. Once he relaxes he lives in the \"Yes.\" \r\nThanks for sharing.

I love this, Michelle. And I love how you described what happened -- he talked \"his butt off.\" That's the best way to say it! Wishing you and yours many blessings this holiday. I'm so grateful we met in person in November. :smile:

Sometimes us ‘ganders still get that confused! Glad he corrected us too! Great post!!!