Tell Me Something I Don't Know

Tell Me Something I Don't Know 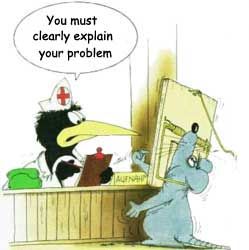 Mike had to go and see his regular GP yesterday for a follow-up. I am glad that he has found a doctor whom he trusts, because he does NOT like change, he does not like being made to explain himself repeatedly and I would be hard-pressed to call him patient. The fact that we have found a family doctor whom Mike will listen to is a miracle in itself. Guess who had a resident with her today?

Now, if you've been dealing with the medical field for a bit, you are probably familiar with the following term:

com·pli·ant
/kəmˈplīənt/ - Inclined to agree with others or obey rules; meeting or in accordance with rules or standards

Did I mention Mike isn't very patient? I don't think the poor resident knew that. I'm fairly sure that in most instances my charming husband has been labeled as "non-compliant," but I don't know if that is actually on his file. When the nurse asked if it was all right if the doctor's resident was in the room, Mike figured they would both be there. Turns out the doc was still busy with an earlier patient and Mike was left with the resident.

I think this appointment was doomed from the start for someone who is resistant to change and doesn't like having to repeat his medical history.  Apparently the resident didn't bother to look at his file (which is digitized, so it's easy access) and wanted Mike to explain why he was there. Long story short, I am glad the doctor was able to come in and see him and get things sorted out.

After he explained his afternoon adventure with me, he also shared that he has been having more nerve pain and that was why he had gone in. I thought he was following up on blood work. With everything that has been going on in our life, I hadn't even noticed he was in more pain and now I feel like the crappy caregiver. I am glad that Mike has decided that he doesn't always need me and that he is independent enough to make his own appointments and get to them on his own; but I feel like I've neglected him a bit. He doesn't think that at all and he said he hadn't told me because I had enough on my plate. *Sigh* Tell me something I don't know.

We also received a letter back from the government this week stating their denial of benefits for him, so we are going to start the appeal process -- which means more on our plate. Good thing we are going camping/fishing this weekend. My phone and computer don't work where we are going and I will be forced to unplug and unwind.

Same as Denise. Chris the situation is definitely not funny but I laughed out loud in the way you wrote this, especially the noncompliant and government assist. Hope you rested!\r\nil

Hi--I know the feeling about not being in the know--it's hard not to feel like you're somehow letting someone else down. It's great that Mike takes care of these situations and that he does tell you what's going on. \r\n\r\nI'm so hoping that, as I type this, you are lost in a nap during your R&R. :)

Here's to respite time! :D\r\nMy partner so often goes ahead and does her own thing, and communication with doctors becomes a real challenge, especially when she insists on explaining things <i>her</i> way.\r\n\r\nCaree independence versus our need to know is a real tightrope. You've been working with all the knowledge you have and with so many variables. There is only so much we can control. Please be gentle with yourself.

Ha! I think Mike and Elly are in the same category when it comes to Doctors! The Dr. always asks why she has come in and the answer is always, I don't know why you want me to come in all the time, I am just fine! Changing/seeing specialist doctors is so hard and if we can avoid nurse practitioners or \"residents\" the better off we are, right? I am glad you have some time to unwind and unplug! Don't give up on the appeals!