Tell Us: What's Your Truth?

Tell Us: What's Your Truth? 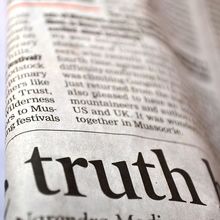 It's National Honesty day. Because we begin April with lies, we end March with the truth.

What's your truth? What would you like to simply just say without worrying about how it sounds? Today's the day to do it.

Tell us your truth in our comments section, below.

Thank you, Denise. I don't mean to not focus on my mom and what she is going through. Guess I just needed to vent at a moment I was feeling upset. Before her stroke, my mom walked with a cain. But she was at least able to be independent as far as taking a taxi to go food shopping or out shopping with her sister. Now she is totally dependent on me, which I know is very hard for her too. I'm glad I found this site. Thank you for welcoming me.

I'm a single working mom. My mother lived in the same house with her 2 sisters for 35 years. Six years ago, both my mom's sisters passed away. The kids and I had just moved to a great new apartment 2 months prior. On the night of my aunt's funeral, her daughters, who inherited the house, told me that if the kids and I moved in to my mom's apartment and they moved her downstairs that they wouldn't have to sell the house. Not wanting my mom to be traumatized any more than she was over the loss of her sisters, we packed up again and moved. (This is the apt that I lived in with my parents before I married). The apt is small, and I had to sell the dining room furniture and many other things that I loved because none of it would fit here. We've been here for 6 years now.\r\n\r\nBefore my mom had a stroke 2 years ago she was in and out of the hospital 10 times. Each time, for various reasons, we would be in the ER for 10 hours at a time before they admitted her. Each visit entailed me going home and gathering up all her things she would need for a hospital stay, paying for television and telephone, running back and forth to the hospital from work, etc. When she had a stroke, she was transferred to a NY hospital. I had to leave my kids for 7 weeks, running back and forth into NY followed by 5 weeks of rehab at a rehab facility out of town.\r\n\r\nLuckily the stroke was in the back of her head and only affected her walking. My mom can only walk with a walker. She has an aide during the day but when I come home she leaves. Weekends, it's just me. (I have a brother who lives down the shore and who is basically useless).\r\n\r\nI love my mom with all my heart. She has been my best friend for my entire life. Which is why I feel so guilty for feeling resentful all the time. I have absolutely no life outside this house. I don't make plans with friends to do ANYTHING because I can't leave her alone for long. There is no one who can come and stay with her just so I can get out for a while. I dread summer. Haven't been to the beach in years. My mom tells me to go and make plans, but I can't leave her alone for the day. She has an emergency service and wears a bracelet, but if she were to fall or to be unconscious that wouldn't be much help. She is also on coumadin, which could be dangerous if she were to fall or cut herself.\r\n\r\nWeekends are the hardest. I try to think of places to take my mom to get her out of the house, but MY arthritis and fibro make it really difficult to push her wheelchair very far. Just feeling very down today. Thank you for allowing me to vent. I know that people have it much worse, but sometimes I feel all alone in this.