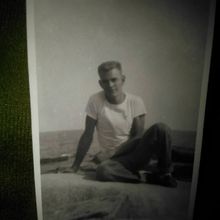 Today would have been my Dad's 85th birthday.

I have been interviewing people recently for use in a book I am writing. It is interesting to me that although this isn't a part of my book, I've had a couple of people share  experiences they have had with their loved one visiting them after death, and showing signs of their presence.  This week while having a great interview, I heard the story of how my interviewee has been contacted by both her parents since they died, and how much she appreciates the connection. Her mother was a great lover of hearts and used them as often as she could in as many ways as she could. Some time after her mother passed, the woman told me of walking in the city one day and thinking intently of her mom. Suddenly from a floor far above her, hearts began to rain down on her. Someone had released a big box of paper hearts! She stood there as hearts fluttered down from the sky, dancing all around her to the ground. It just made me smile to hear the love and comfort in her voice as she shared that with me.

After my father died I struggled for some time about the one thing many people struggle with. Was I enough? Did I do enough? It was an uncomfortable struggle, but in retrospect, I am thankful that I stayed with it, and let myself wrestle with these questions so that I would work through them thoroughly. One day, while having a particularly rough time in a perfect storm of missing my dad, experiencing frustrating experiences within my husband's family, feeling self conscious about starting my own business, and the struggle I was still working through about my dad's care and whether I had done all I could for him, my dad let his presence be known.

In the middle of feeling like I was being tossed around by a huge wave, I started to hiccup. These were the kind of hiccups that barely even let you catch a breath in between. The hiccups lasted for 15 minutes, then 30 minutes, then an hour without interruption. Suddenly, my AHA came and I said, "Dad, HI!  You came to see me. You choose the one thing I couldn't ignore, even though clearly I tried my best to ignore you. Thanks for not giving up. Thanks for visiting me. I think this is your way of telling me you are okay. Yes?"

And, the hiccups literally stopped, without one more.

If you are still reading, I imagine you are asking how in the world I would associate hiccups with an spiritual or energetic visit from my dead father!

Dad experienced an unusual reaction to anesthesia and came out of a hernia operation with severe hiccups many years ago. These were hiccups that would not relent, even with medication, breathing techniques or relaxation techniques. The hiccups were non-stop even when he tried to eat or drink. He literally fell asleep after hours and hours and hours of hiccups and still hiccuped in his sleep! It was exhausting for him and painful for us to watch. Finally after about three days they stopped, they'd come back and stop again. After a couple more days of that, they quit altogether. I thought to myself after they finally stopped that it had been a real testament to my father's tenacity, to his ability to persevere no matter what.

However, with his next surgery, it happened again, only longer this time. And the next surgery, and even the next! Dad's last surgery was a very traumatic emergency surgery and now with the added strain of advanced Dementia. We were warned that he may very well not survive. I spoke of the  issue with the hiccups, but I think his physician was much more concerned with the medical emergency than my worries about hiccups. However, after surviving the surgery, Dad experienced about 10 days of hiccups. It was almost more than we could bear watching at the time. He was not able to really communicate or understand, all he knew was that he was in pain, was constantly choking from the hiccups and could barely catch his breath. I was in tears from joy the days they finally relented. Again, I was struck with my father's ability to keep on keeping on, no matter what. It brought back the values my father lived with and how strong he was.

Hiccups, something I will forever associate with my Father. Even though the association isn't a happy one, it is something that certainly catches my attention! I've had bouts of hiccups a few times in the last three years. I know they are Dad communicating with me when I say, "Hi Dad! Thank you for letting yourself be known" and they stop. When they keep going,  I know it is just a normal case of passing hiccups.

Our house is very high. Our house is too high for not only any ladder I could ever use but any ladder I could ever move! For the first time in my life, I have had to hire out things I have always done before, things like cleaning the gutters.This morning, while in the bathroom putting on my makeup, there were two men were outside working on the gutters. I chuckled at how my Dad would be clicking his tongue and shaking his head to be paying money to someone to clean my gutters. Suddenly, I began to hiccup.

Happy Birthday, Dad. I miss you.

This is so lovely, Leslie. I just love how often your dad visits to let you know how much he loves and supports you.

What a great story! Your Dad loves you, he misses you too. And he's obviously a person with both sensitivity and a sense of humor!