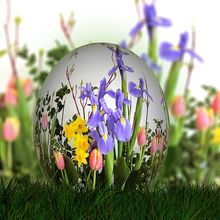 Hopefully everyone had a good Easter! Ours was okay. Church was GREAT but we went out to dinner with my in-laws--it was horrible!

My father-in-law has become a very mean and nasty man and yesterday was no exception! They do not have cable or satellite and have had trouble getting PBS which my mother-in-law watches. I asked her about it yesterday and she said they are still having problems and she misses being able to watch PBS. When I mentioned this to my F-I-L he said there's nor problem and I don't know why you (M-I-L) complain.I mentioned that you guys should get cable or satellite and he said in a very mean tone that "I'll do what I want to do" with a HUGE smile on his face. He has become a very mean man and that was it for me.

A little background: My AH's brother killed himself four years ago this month and my F-I-L has never dealt with it. It's made him a very bitter person. My in-laws have never gotten along and this has made things even worse. My M-I-L has her own issues and  we have our issues but for him to deny something she enjoys, watching PBS, makes me mad! My AH has a horrible time standing up to his father as his father has a temper and AH is afraid of what his dad will do. F-I-L has had medical issues in the past, mass in his colon, blood clots in his legs, high blood pressure, diabetic,  and has asthma. He will not tell us of any health problems as we got concerned and care. He doesn't like this as it's none of our business! It's So frustrating as I try to be nice and helpful and then get shot down!

On a positive note our friend, Phillip, has made great moves! He is approved for Medicare, working on getting on food stamps, and starting to get his affairs in order. The other major thing is that he still has his folks' house. They have both been gone over 10 years and he hasn't done anything with it as it's next to his brother's house who he doesn't get along with and he doesn't want to go over to. Thanks to my AH he has sold the house to a flipper and is getting it out of his hands. Phillip has been in the hospital for almost a month which I know is a long time but it has helped him do the things he has needed to do. People at the hospital push him to do what he needs to do. Unfortunately his foot is not healing as fast as they were hoping.

That's the latest on my journey called caregiving!

Hi Maria--Your father-in-law sounds like someone who is so much pain! And, unfortunately, he passes his pain on to everyone around him. What a sad situation.\r\n\r\nWhat does your mother-in-law say about living with him? You must worry about her well-being, too.

It is so tragic to spend your life being mean. It must be awful to be inside that man's heart and head. Glad you had a meaningful worship, and hope it brings comfort and inspiration as you remember it.

Hussy thanks for reading me post &amp; replying.\r\nUnfortunately getting Netflix is not a option as he considers the house him &amp; not theirs &amp; if he doesn't want something he wouldn't use it. We got them a answering machine a few years &amp; he never hooked it up as he saw no need for it. He truly rules the roost &amp; pretty much ignores anything she wants. It's a very sad situation. \r\nThanks!\r\nMaria

Hi Maria -- I'm glad to read that Phillip has been making some important changes, but sorry to read that your father in law is steeped in such bitterness. He sounds very unhappy and very invested in making sure those around him are equally unhappy. Could you perhaps record some PBS programming on your TV and drop it off for your mother in law? Invite your mother in law over to your house to watch TV? Maybe a DVD player and a subscription to Netflix for Mother's Day? Or would this only make things worse?