The Blessing of a Broken Toe

The Blessing of a Broken Toe 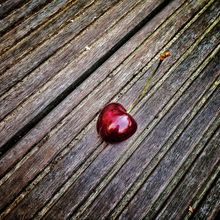 My left pinkie toe currently resembles a somewhat squashed bing cherry. (It wasn't that attractive to begin with.) And, honestly, it's my own fault. Three days ago I was feeling (surprise!) a little bit unwell, and a whole lot tired. So I took out my contacts, with the idea of taking a short nap. Foolish, foolish woman! What the fudge was I thinking?

Of course that nap never happened. And after a while, I decided to get up, and get myself a  snack. Already a little bit wobbly on my feet. And, without my contacts, pretty much blind as a  bat. But I headed to the kitchen anyway, disregarding illness, tiredness, near-blindness, and the fact that I am the Queen of Klutzes.

And predictably slammed my foot into a heavy steel kitchen stool. Not terribly bright. But I do take some satisfaction in the way I heroically choked back the very loud, colorful stream of profanity which burst out of me. (I know Grandma has to have heard it all before, after all she was married to a career Navy man for 70 years. But I still didn't want her to hear such coming from me!) I knew instantly I'd broken that toe. I'd done it before. (Queen of Klutzes, remember?) Having lost all appetite for a snack, I grabbed some ice in a dishrag, and hobbled back to my room. Feeling very, very stupid. That steel chair has occupied the same spot for years, for pity's sake!

You might wonder, why didn't I go to a doctor? Well, last time this happened, after all the poking, prodding, and x-rays were done, they told me (and this is a direct quote): Yep, you broke it!, and, Nope, not a whole lot we can do about it. Buddy-tape it, and take some Tylenol!

So, for a few days now, the only shoes I've been able to wear are my flip-flops. You should've seen me, gimping around Walmart with Grandma, nervous as that proverbial long tailed cat in a room full of rocking chairs. (Or maybe, heavily loaded shopping carts!) For her part, Grandma was very considerate, didn't make me spend two-plus hours roaming the entire store, and bought a few treats for us besides. She's really nice that way. But then, nothing makes her  happier than a good Organ Recital, something she doesn't get too often from me. (I learned young to keep my pains and illnesses to myself. No sympathy from my Mom; to the contrary, such is most likely to really irritate her).

This morning, I was at the dollar store, which of course was quite busy, and as always had but one  cashier working. And the customer ahead of  me in the checkout line had a big pile of stuff to ring up. And a hassle with his credit card. (Natch!) But he, and the lady running the cash register turned to me and apologized for the delay. (Cottonwood is much nicer than Perdition, oops I mean Phoenix, in that regard) And I smiled and replied, No problem! I can't hurry right now even if I wanted to!

On my way out the door, I thought a bit more about that. About how this actually compels me to slow down, at least for a while.

My New-Age-y friends would say, This is the universe telling me that I need to stop rushing around the way I have been for about nine years now. (I do have a few friends like that, you can't live so close to Sedona and not.) My fellow Christians would likely tell me, God didn't make this happen to you, but He definitely can use it for His own purposes. I agree. Which does make the whole painful, embarrassing, and remarkably unattractive episode much easier to accept.

Oh my, Desiree. A broken toe. I broke a toe when I was a teen carousing with my siblings. Remember the pain to this day. And the poking and prodding and skilled medical advice just exactly as you related it, lol. (It's only funny in retrospect!) And then you had added insult to injury and saw stars, ahhrrrggg! Kudos for your ability to apply philosophy to the situation. Feel better. Rest up. Consider steel-toed boots...

Oh, man, Desiree. I'm seeing stars for you!! I think a broken toe is awful because you can't do anything about it and you still have to use it. \r\n\r\nI suppose we do reminders once in awhile to slow down. And, what better time to slow down than the summer? Life goes so fast and gets so busy. We make it last longer when we slow it down.\r\n\r\nI'm thinking of you today and hoping for no more accidents!!

Postscript- about 2am this morning, I awoke to go to the bathroom. And on the way back, smacked the aforementioned squashed bing cherry into the corner of my dresser. I actually saw stars! And nearly fainted.\r\nHow can anyone be so clumsy, and yet live as long as I have?!?

Ouch ouch ouch ouch! I've done it, too, and I know how it stings! Take care and yes, go slowly!