The End or Rather His Beginning is Near

The End or Rather His Beginning is Near 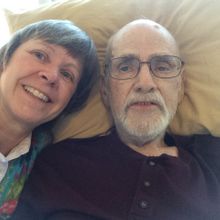 Well, it's been a long Sunday so far. I woke up and was so grateful Dad told his wife not to call at 6am. Since Thursday morning, she's called at 5:30-6:00am to do her daily reading and prayers with Dad. We slept in this morning! When I came out to the living room and greeted Dad, he responded with a smile. Awesome Hubby and I changed his shirt, briefs, pad and I gave him the warm washcloth to wash his face. Toothbrush took care of the dental care needs then gave his pills and morphine. I decided I would scrub his fingernails before I left for church. He looked so pleased so I asked if I could take a picture. So we did!

AH stayed home while I went to church knowing Wife would be coming as well as their retired Priest. I wasn't sure how Catholic dad had become but felt he might be ready for last rites. By the time I came back, Priest had left but Wife was still by Dad's side. FormerLivingroom Son had come also to visit. All of a sudden Dad started wretching, AH got the bowl and a towel letting Wife handle the duties. I then learned that Dad had been given two pain pills with sugar wafers about an hour apart because he is stomach was hurting. I bit my tongue and gently said that I had mentioned this morning that Dad needed the liquid pain meds because he was having trouble swallowing. Wife decided she needed to leave, couldn't watch Dad in pain. I was grateful for her response and assured her I would let her know what the nurse said. I called Hospice to check with Nurse who took quite a while to call back but I gave him the morphine before she called back since he was in pain. There was also a change in his urine which told me Dad was in distress. The Nurse called back and I was able to give more meds for his comfort, she would also be coming by later.

Family began to come over but ended up overlapping with the nurse visit. Normally, we would not have had everyone at once, it just happened. Nurse checked Dad and said she would be surprised if lasted the night. Timing was good for family, some had been out of town so they needed to be checking in. Everyone loved on Dad and he responded. NurseySis and I prayed with Dad and gave permission for him to go on...he said "Pray, it hurts." The nurse showed us how to reposition Dad so he was more on his side but he keeps sliding back to his back. So I sent Wife the update with her daughter instead of calling her. Wife called and it was terribly difficult watching Dad trying to understand her so I asked her to pray one of their prayers. Fortunately, she picked The Lord's Prayer so the three of us said it together, Dad unable to say most of the words. He had spent all afternoon eyes closed within himself and dealing with the pain. I was respectful and let her have her breakdown then she hung up. Dad was exhausted and we decided to wait before changing his position and briefs.

I wanted to protect my Dad but how to allow honest processing with Wife without exhausting him was my problem. I was glad to see the reaction on Dad's face when Wife talked about him going to heaven. It was my job to interpret for her (she was on my phone) so I reassured her that he was reacting to words about letting him go to heaven. Tonight I am trying to sit up with him giving him the meds to keep the pain away.

I realized tonight that this seemed familiar . . . My dad looks remarkably like my Grandpa (maternal side) who passed in 2002. It was then I also realized that Grandpa also had prostate cancer. They both went thru different treatment and circumstances but in the end it looked the same! My dad has changed a whole lot in the last 3 weeks and I never would have imagined that he would look like my Grandpa. So, I am waiting and comforting. His beginning into new life with his Lord is near!

Sometimes the transition can be a bit rough, but Joy comes in the Morning! God bless you, your Dad, and your family. Thank you for sharing this heart-warming story.

Your dad is blessed to have you with him....thinking of you both during this time.

I am thinking of you this morning, and supporting you as you tenderly carry your Dad in your arms.

Love you friend. What an honor for your dad to be with you and comforted by you in his last days. I'm sure you feel the honor was yours. You did good! What an awesome photo also!

You are doing a wonderful job, EG. I so appreciate that you find the time to update us. Keeping you and your family in my thoughts and hoping your father's transition is a peaceful one.