The Ghosts of Christmas Past

The Ghosts of Christmas Past

0
The house is weirdly empty feeling. I've lived here two years and my mother has been with me in it almost every minute with the exception of one or two days. Yesterday my sister, my husband and I placed my mother in a memory-care facility for a temporary, short-term stay while we await the birth of our grandchild and my husband visits from Ohio for the holidays.

Preparations for it felt like getting my kid ready for summer camp. The admission was remarkably uneventful and smooth, no gnashing of teeth. While the nurse whisked my mother away for an assessment, my sister went with the Sales Director to sign papers, and my husband and I brought in her personal belongings to her apartment. Like changing the set for a new act in a play, or getting ready for The Big Reveal on an HGTV show, we had everything in place and were out the door before things got hairy and emotional. My mom's best friend was there to greet her and the plan was for them to have lunch together. We didn't stick around to watch and so far I haven't received a call that my mother is creating havoc with residents in wheelchairs and on walkers and they are begging me to come pick her up.

Last Christmas was an inkling of where we would be headed this year full-time. She had one of her first angry melt-downs over a gift she insisted she bought for my sister, a necklace and earrings. I didn't care that she had bought the necklace for herself after extensive debate and patience on our part during a visit to a local, very crowded craft fair. The earrings I had bought for her for her birthday after extensive in-store shopping and online shopping and "finally getting exactly what she wanted". Now these items were re-wrapped and re-imagined as presents for my sister. I was cool with that, but the whole thing was bothersome and upsetting and confusing for her. On Christmas Day my mother got herself dressed, as she would do for a good part of the year ahead, but appeared in sweats instead of the usual immaculate and perky Liz Claiborn 2 Petite matching top and capri pants she normally wears. We hosted the Christmas Dinner of ourselves, my sister and husband, and my daughter and her husband. By evening my mother was angry beyond words, sputtering, "And who invited HER to the party???", referring to my sister, and spinning out of control while she wailed about her CD's and other bank accounts. A trip to her doctor for medication was the order of the following day.

This year I helped her get dressed. She sat in a chair as we handed her presents which she did not seem the least bit interested in opening, or the least bit interested in once they were opened. She had lunch by herself before we served Christmas dinner, and pushed her partially eaten Christmas repast off to the side while the rest of us laughed and ate and belched. While we relaxed and chatted after dinner, my mother performed her usual Witching Hour Activities display so everyone now knows I'm not a liar, and she continued to fuss in the kitchen with endless energy until I took the lunch meat out of her hand and said, "NO, we're not doing this." It was like giving her permission to stop; she turned her back on the mess she created and went to her room for bed.

Next Christmas we'll be helping a toddler to walk and seeing the holiday through her eyes, with all the joy and excitement that brings. I have no idea what to expect for the year ahead with my mom. I can guess. 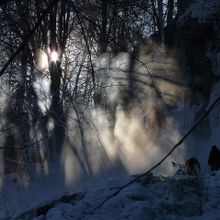 I'm happy to know that you're on a break. I hope you really, really enjoy it!\r\n\r\n\"NO we're not doing this\" - and it worked. That's good to know. I'll have to remember that I can try being bossy. :-) \r\n\r\nWere your family members surprised or upset by anything they saw in your mom's behavior? Or was everyone pretty much up to date on her condition?

Hi Jan--First, Merry Christmas! Second, I just love reading your posts--they're so visually honest. I can picture just what's going on. \r\n\r\nI soooo hope your break is enjoyable and refreshing and that your mom does well.\r\n\r\nLet us know when the baby comes. :)