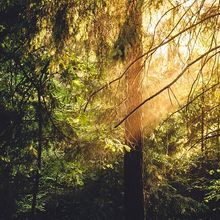 When the end came, it came quickly and unexpectedly.

My brother had finally talked Mom into letting him move her to Houston to be near his family. She was excited about the move and was telling everyone about it. I suspect she was still quite anxious about this change, how much so, we'll never know. She didn't make it to Houston.

I was just about to walk out the door to go to the dentist when the first phone call came. It seems my name was still listed as the first one to call in an emergency. It was a social worker from the hospital calling to tell me Mom had been brought in to the emergency department. They hadn't completed their evaluation yet, but from what the facility told them, it sounded like Mom had had a stroke or a brain bleed. They would call back when they had more information, but in the meantime, did Mom have advanced directives? She did, of course, the facility required all residents to fill out these forms. There hadn't been time to grab the papers before the ambulance came, so they were calling me.

I had just about enough time to call all my siblings before the phone rang again. It was the doctor. He asked what I knew of Mom's condition and I told him. He said Mom might be having a stroke or brain bleed, but the labs didn't really indicate this. However, her breathing wasn't normal and her blood pressure was very low. He said it looked as though she was starting the dying process. What did I want him to do?

After taking a deep breath, I told him if the dying process had started, we needed to respect that.

The doctor gave me time to stumble over my words and say things twice, three times. He told me it would probably be just a matter of hours. It was possible she might rally for awhile, but it wouldn't be long. He said she looked as though she was having some pain. Did he have my permission to give her pain medication? Of course.

The social worker talked to me as well, then I called my siblings again. This call was harder. My brother in Houston was already arranging to fly to Denver to be at the hospital with her. Then I could relax as he would take over.

More phone calls. The tough ones.

Then I got a call from the facility to fill in the details. It seems Mom had gotten up, gotten dressed, put on her make-up, and combed her hair. Then she walked down to the clinic office and was chatting with the staff when suddenly her left side collapsed. The staff caught her and lowered her to the floor and called for an ambulance. It seems the facility had planned quite an event. One wing of the building was going to be demolished to make way for something newer and nicer. She was dressed up for a demolition party.

I'm glad she left quickly. I'm glad she didn't have to go to a nursing home. I'm relieved we had six months of pleasant phone calls before she passed. I'm relieved her suffering is over. She had seemed truly happy over the last week or so.

In a week, we'll be flying back to Colorado for her funeral. We'll also go through her apartment and clean it out... a daunting task. Friends are calling and writing. Often they tell me to hold on to my memories of Mom, my memories will comfort me.

I only wish I had some good memories of her.

Forgive me for my slow reply to you, Goldie!! I'm so glad you are settled into your new life and that you grabbed the opportunity to move when you did. \r\n\r\nYour last sentence reminded me of my uncle, who sat with his mom during her last days. At one point, he turned to us and said, \"I'm trying to think of something good to say about her. I can't.\"\r\n\r\nThe reality of our relationships with some family members means we don't have those good memories. \r\n\r\nI hope you take comfort in the good memories you created for yourself. Meaning, you stayed. You cared. You resolved and solved. Certainly, your love for your dear, dear father motivated you. You also gave (and give) yourself so much peace of mind. You stayed present to help with your mom even when staying to do so caused pain and frustration. You have good memories of your commitment to family. \r\n\r\nPlease continue to keep us posted on how you're doing. Your writing to us has made you a good friend to all of us.

Thank you all for your responses. I wish I could say I miss my mom. I wish I could be sad at her passing. I feel mostly relief - for her because maybe she is more at peace now and for the rest of us (well, me, for sure) because it wasn't easy living with her. A huge weight has been lifted. I feel freer than I have in years, but then I feel a bit guilty because I should be feeling sad.

Goldie, I am so sorry for hard this is. The difficulty of those calls must make it even harder to process. Sending you a warm hug

Thinking of you and your family, Goldie!

I'm so sorry for your loss, and even more so for all the calls and decisions which fell to you. Personally, I take solace in mercifully quick goodbyes. I hope the same for you.