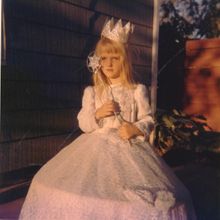 Thought I would share another memory of my parents. This one is mostly about my Mom.

Mom had many, many talents -- sewing, crocheting, painting, photography (including developing her own black and white photos), writing, baking, gardening. The list goes on. Dad's work as a tow boat captain took him away for 30-plus days at a time, so she filled what must have been lonely days, nights and weekends with a multitude of hobbies. She entered her artwork and photographs in many art shows, consistently coming away with blue ribbon after blue ribbon, and many times, Best of Show. Sadly, I don't remember Dad ever complimenting her on any of her creations, although after her death, he would talk endlessly of her talents.

When I was around 4 or 5 years old, Mom decided to make a princess costume for me for Halloween, and signed me up for the costume contest at the town's annual Halloween Carnival. I only have a single picture, but I can vividly remember the dress, the making of the dress, and the costume contest. She spent hours and hours making this dress, carefully measuring me and tediously cutting patterns and fabric, pinning everything together, fitting me in itchy fabric with hidden pins ready to jump out and stick me at any moment, tearing out sleeves and re-sewing them to be nothing less than perfect. She hand-sewed beads and sequins and rows of lace. I'm confident less time and care has been spent making most wedding, first communion and Quinceanera dresses!

Now, along with the dress came the accessories: a crown and wand. I suppose these could have been easily constructed with some cardboard and aluminum foil, but that just wouldn't do!  Across the alley behind us lived a nice man who did a lot of welding. I was too young to know if he did it for a living, or if it was just a hobby, but I do remember watching him in awe from my backyard whenever he worked in his garage. I remember seeing him wearing the big black-out mask and heavy gloves -- the hiss of the torch, sparks flying everywhere, the smell of burning solder and metal. Really cool stuff! Mom had him make me a metal crown and a wand, and then she covered them in glitter. The costume was complete, just in time for the Halloween Carnival and costume contest!

The only problem was, I was NOT a girly-girl. To say I hated that costume would be an understatement. I was 100% Tomboy and wanted to be a cowboy, a fireman, a ghost -- anything but a princess! I was so angry those weeks that she was working on it. I can remember trying to come up with a plan to somehow ruin the dress -- an accidental spill, a disastrous tear, a spontaneous fire(?), something, anything so I wouldn't have to wear it! Either I just couldn't bring myself to do it, or Mom knew me well enough to know to keep it hidden when she wasn't working on it (most likely the case!). I'll never know but the dress survived, and I had to wear it to the Carnival.

The Carnival was held at the town park, and the costume contest was held on the ball field. We all paraded around the bases, single-file -- princesses, ghosts, ballerinas, those lucky cowboys, clowns, firemen, witches. Around the bases we went. As we returned to home plate, the judges either directed us to the right or to the left. A few minutes later, I found myself nervously standing in a group of five on the first base line -- the Top 5! -- while all the rest stood dejectedly on the third base line.  I looked up into the stands and I saw Mom sitting in the crowd watching me, with an anxious yet hopeful look on her face. I would like to say that at that moment I had a life-changing epiphany -- that suddenly I understood that there were moments in life that were about someone other than ME, and that I understood how just making Top 5 was a much-needed affirmation to Mom that she really did have skills. But honestly, I pretty much only remember feeling completely humiliated and embarrassed that I was in public, dressed as a princess, with everyone looking at me. Yeah, I was that kid.

To add insult to injury, I won that costume contest. Even got my picture in the town newspaper. I've had the picture for years -- yes, the one with the "I'm mad and there's no way you can make me smile" face (it makes for a very funny Facebook profile pic!). But I did not know what ever became of the dress, crown and wand. Well, while cleaning out Mom and Dad's house (aka The Purge) at Thanksgiving, I found the dress and the wand. Sadly, the dress was in really bad shape -- it had spent years in a cardboard box in the damp, musty basement, and was covered in mold and riddled with mouse droppings. So, I had to let that go. But I did salvage the wand, and now have it proudly on display at home on a bookshelf in my library.

And, although it's close to 45 years later, I did finally have that epiphany that there are moments in life that are about someone other than ME, and that Mom had some serious skills.

Not so close... Waggoner was our address, is 30 miles south of Springfield and 70 miles north of St. Louis.

<a href='http://www.caregiving.com/members/tiredbutdetermined/' rel=\"nofollow\">@tiredbutdetermined</a>, I so enjoyed your story and the talented way you put it forth. I had to laugh when I read about the tomboy... Me too, my mom used to check to make sure I had a slip on before I left for school (dresses only in those days.) I hated the lace on the slips, it was scratchy, and I couldn't stand starched dresses. Around age 5, I distinctly remember having an argument about me having to wear a shirt outside. My argument was Gary didn't have to wear a shirt, and her response was I was getting too old not to wear a shirt!\r\n\r\nI love the photo, and your look--priceless.. And the dress, even a hoop skirt! I'm sure you'll treasure that wand forever.

I am loving these stories, TBD! And, it's awesome that you have the photo and the wand. :)

Great colorful story! What other costumes did she make for you over the years? Hopefully one or two that made you a little happier than this one did! My mom was the same way. It did not rub off on me!

Another great journey that you have allowed us to enjoy with you.....I can see where the \"Determined\" part is essential to who you are and always have been. Precious photo.