The Meaning of the Word Hospice

The Meaning of the Word Hospice

(If the blog has been quiet recently, it is not because I stopped writing. It's because I was working on my first assignment for my "Narrative Journalism" course. This is my first course in pursuit of a Master of Fine Arts in writing. How's it going, you ask? I'm getting crushed by people who really know how to write, and I couldn't be happier. No, of all the things I've been called, "masochist" is not in the top 1,000 choices you have unless you count the years before the Red Sox won the World Series in 2004. In that case, it's number two. Here is my first effort into the journalism field. Feel free to critique.)

Easily the darkest night of my soul was when I had to admit to myself that I could no longer care for my wife. No matter how heroically I fought, I could not keep her in the comfort and dignity she deserved after her torturous, protracted fight against cancer. My wife needed the gentle advice and experience of those who spend their lives living amongst the suffering and dying. She needed hospice.

As the medicine business goes, hospice is a quiet job--no sirens or flashing lights. Often, the hush in the room is magnified by the white noise of humming machines. If you have spent more than an hour amid the clamor of a hospital, you might think this reclusive space is the ideal environment for curing all ills, but it is not, and few people know it more than Barbara Volker does. She has provided physical and emotional comfort in similar hushed rooms to countless dying patients and their families for the last half of her 44-year nursing career.

“My acquaintance with death and dying started at age nine when my five-year-old brother died of polio. My other brother and I both had it as well, he only briefly. I was out of school with a home teacher for a number of months during the fourth grade. It was sometime relatively soon after that when I decided I would be a nurse. I never moved from that decision.

“The first 20 years of my nursing career were mostly spent working critical care… I do think that one thing that ultimately pointed me in that direction was the numerous times I spent using extreme measures to save the ‘un-savable.’”

“I particularly remember a resuscitation effort on an elderly woman that went on and on. I finally said to her physician, ‘Are you trying to make her live forever?’ To which he replied, ‘If I can.’ Years later, when I started hospice nursing, I found it a great relief to be able to acknowledge that we couldn’t save every life and that there came a time when it was okay to acknowledge that it was time to change the goal from cure to comfort care.”

Our horror started on Halloween Day of 2010, when my wife went to the doctor with a backache. Cancer had invaded her sacrum (lower spine). In March of 2011, she had it removed and titanium put in its place. It took 27 hours of surgery performed by five surgical teams over a three-day period. Part of that time, she had to be in a position that placed her face down with her head below her heart, and that caused severe edema (a build up of fluids) in her head and neck. The combination of the edema and a heart attack during surgery severely decreased blood flow to her eyes long enough that she completely lost vision in her left eye, and has less than fifty percent remaining in her right.

It was 54 days from surgery until she returned home. Soon after that, we were informed that the cancer had spread to her lungs. Before surgery, doctors told her that she would be wheelchair-bound for the rest of her life. She defied them by walking unaided in the spring of 2012. This victory was short-lived; a year later the titanium that functions as part of her spine fractured, leaving her in agony, and unable to ever walk again. Her condition is inoperable.

I tried to care for her at home as I had done before, but I could not. That’s when the painful realization hit me that my wife’s level of care resided far outside of my abilities. That’s when I contacted hospice.

When I called them, I did not know what to expect. The same morning I called a nurse arrived at our house to evaluate my wife’s condition. She was quickly admitted into hospice, and soon after, a hospital bed was delivered with a special air mattress that prevented bedsores. Her pain management was reevaluated, and new prescriptions ordered, so she could be made as comfortable as possible as quickly as possible. We were assigned a primary nurse, a licensed vocational nurse, an aide, a social worker, and a chaplain. We were stunned with the amount and quality of care we received, but there was a question that I was afraid to ask: Is this the normal level of care, or is she dying?

I later learned that this was their typical care and it was not unusual for patients to improve in hospice, as did my wife, but after this scare I wondered to myself: How do hospice workers deal with the constant barrage of mortality they face? Seeing “the end” as inevitable may be a relief from fruitless “extreme measures,” but death is still not a stage of life most people are at ease with.

“A hospice nurse has to develop a sense of comfort with death,” says Barbara. “That comes from a gut level realization that we all die and that includes her. She has to face her own mortality. It actually started for me in just making myself say the words ‘death’, ‘dying’, ‘died.’ Saying them until they didn’t seem foreign and uncomfortable any more. I practiced in front of the mirror. People can’t make themselves say those words. They use all sorts of euphemisms…’he passed away’, ‘he met his maker.’

“Working in the hospice setting is not for everyone. Probably the question that any hospice nurse gets asked the most often is, ‘How can you do that, doesn’t it depress you?’ The best answer I can give to that question is that it is all in your perspective. In hospice care, the patient’s death is the expected outcome… the goal becomes to do all that is possible to help the patient and family to live their lives as fully and as comfortably as they can. For most of them it means being where they want to be; usually at home with the bed in the middle of the living room so they can be part of life, with their family, where the dog can jump up on the bed and snuggle.” 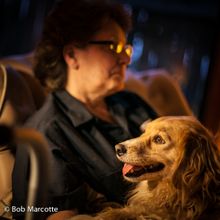 Our dogs often jump on my wife’s bed and nap with her. Her physical comfort is almost back to what it was that Halloween day, but we still see signs of disease progression. We both know the end to this story, but we continue to write as many new chapters as we can. This is still our story.

Typically, doctors consider themselves as the ultimate worldly authority over their patient’s condition, but Barbara disagrees. “I believe that people have an amazing amount of control over when they die… One thing I learned long before I ever worked in hospice was that quite a large number of people who are dying know it long before they are told, even if they are never officially told...My mother tells the story of how my brother asked her to give his tricycle (his most prized possession) to his friend, Tommy. My mother replied that it was his and he should keep it, but he told her he wouldn’t need it any more. The morning he died, he told my parents to go home. They had barely gotten home when the phone rang with the news of his death. I believe that he knew that it was his time and that it would be better if his parents didn’t have to see that happen.”

Another aspect of hospice is the support they bring to the family members who are often the first line of caring. Barbara’s words resonate deeply within this caregiver, “Family members who are caregivers often fear most not being ‘enough’...good enough, knowledgeable enough, skilled enough, and supported enough to help their loved one stay at home through their last days. Hospice helps them be enough by always being there on call 24/7. I always looked at my on-call time and knew that most of the time all a family member really needed was reassurance that they had done the right thing and the confidence that someone from hospice would answer their questions or visit if needed. Because of that support many caregivers can look back on their part in the care of their loved one and find comfort in the knowledge that they were able to do what they needed to do during a very difficult and painful time.”

The physical and emotional comfort that hospice provides often creates a sense of acceptance of dying in patients; death approaches like an old friend rather than a mortal enemy. Barbara explains, “dying people often see and tell us about seeing a variety of beings not visible to those of us at the bedside. This is often upsetting to family members, but very seldom to the patient who often seems pleased and comforted by what or who they see. Often the being seen is some family member who has already died or a religious figure such as an angel or Jesus. There are all sorts of scientific explanations about why these visions happen having to do with lack of oxygen to the brain or some other physiological event. I decided long ago that it makes no sense to argue or tell the patient that there was no one there. As a Christian, I believe in life after death and, for me, these visitations to a family member who is about to join them in the afterlife is affirmation of that belief.”

Regardless of faith, hospice is a godsend to patients and their families. Likewise, deep emotional ties are often forged between hospice and their patients, and the workers take great satisfaction from the difficult work they do.

“If the hospice staff is so lucky as to be able to work with the patient and family for a week or more, they usually can get symptoms under control and provide the help the family needs to care for their loved one and be there to answer questions in the middle of the night when needed. When those things happen, the peaceful death of the patient is the ultimate goal with a comfortable life until then. That is NOT depressing. That is fulfilling for the hospice staff.”

Indeed, it seems that in Barbara’s experience, it is what Shakespeare called “twice blessed: / it blesseth him that gives and him that takes.” (“The Merchant of Venice”)

The only response to cancer is the offering of an amazing grace. You must demonstrate by your actions to another person that their life – including their death – is worthy of great dignity and comfort. My experience has shown me that this is the meaning of the word hospice.

Reposted from my blog: http://besidesthecancer.org

Oh, Bob, I just LOVE this!!! And, I'm so happy for you and your pursuit of the MFA. I'm just so proud of you and so proud that are a part of us here. \r\n\r\nWell done, my friend. Looking forward to your next piece. :)