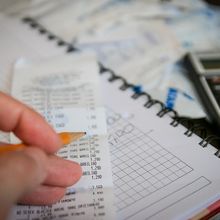 The other day I read Ann Brenoff's blog post called, The Disturbing Reality Of My Husband’s Stay In A Nursing Home. Her piece made me think of my mom's month-long stay in a nursing home for rehab in the fall of 2015. I had meant to write about her stay a year ago but couldn't. The guilt was just too great.

In August of 2015, my mom was discharged from a five-week stay in a hospital. She entered the hospital a healthy and independent 81-year-old who had the horrible bad luck called an internal bleed. The bleed only stopped after major surgery to remove one-third of her stomach. Unfortunately, she started yet another bleed, stopped with a radiology intervention, and had everyone guessing whether or not she had a third bleed (she didn't). By the time she left the hospital, she was a shell. She had lost 30 pounds, her independence, her ability to care for herself.

As her discharge date approached, my dad and I toured a local nursing home familiar to my parents. My mom's doctor had patients there and it was conveniently located. My dad only had an easy 10-minute drive, my brother and sister had easy access from a nearby expressway and another brother could take a train which had a stop across from the facility.

The facility also had received accolades for the care the staff provides per its website:

"We are proud to have been added to the US News and World Report "Best Nursing Homes in Illinois" list in 2012, 2013, 2014 and 2015! This is a great honor and we are proud to be recognized for our dedication to enhancing the independence and well-being of older adults in Chicagoland."

My mom desperately needed therapy and the facility had a large, busy therapy room. My mom, experienced with rehab because of two knee replacements and three hip replacements, believes the bigger and busier the therapy room the better.

I also wanted this facility for my mom because I worried my dad would need a respite stay in an assisted living facility, which the facility also had. He was having his own medical issues, recovering from major surgery in March to remove his bladder, kidney, ureter and prostate; a blocked carotid artery in May; a possible heart attack in early July; and treatment (including skin grafts during an outpatient surgery) to remove the skin cancer which covered the top of his head. I sometimes travel for work and knew my dad would not be able to manage alone in the house.

As it turns out, he just wasn't able to manage, even with me at home with him. So, we arranged -- to his relief -- to move my dad in the same facility as my mom for a respite stay.

So, during a time when my parents were both falling apart at the same time, I had to deal with the facility's paperwork bureaucracy. I had to provide bank statements that my dad could pay for his stay. I had to deliver checks -- one to pre-pay his stay and one as a security deposit. We had to sign an extensive contract promising what seemed to be everything to this non-profit facility "committed to dedicated to enhancing the independence and well-being of older adults." The facility's main concern: That my parents will simply stay at the facility. Because of that concern, management wanted assurance that my parents have the means to pay for their stay if they stay on. During all my interactions with the admission staff, no one ever asked about the well-being of my parents. They never asked about me, for that matter. They called regularly to make sure I dropped off the checks, returned the signed paperwork. I did all of it within a timely basis and still the phone calls came, sometimes from two different staff members both asking for money, money, money.

My mom, while thankfully enjoying a semi-private room to herself, had a terrible time with her certified nursing assistants (CNAs). They were late to help her get ready in the morning, insensitive to her needs and disrespectful to her as a person. During her care meeting with the staff (the charge nurse, social worker, therapist and assistant director of nursing), my mom cried as she described what it was like to receive care from a staff who makes it known they don't care. Oh, gosh, the image of my mom, frail in her wheelchair, crying as she states her case, still gets to me.

The staff listened, responding that they felt terribly about what's happened and will make sure the situation changes.

It doesn't but we continued to just make due. I remained a daily present, ensuring I shared concerns about my mom's care and made sure she received what she needed. When she doesn't get the care she needs, I just provided it myself. My dad's one-week stay became one month as we saw him get better because he can just walk to see my mom and not worry about his meals. His extended stay means more phone calls for more checks and more paperwork.

Finally, my mom's discharge date arrived and we made arrangements to move them to a retirement community (which my mom also hated but at least we make it through the winter). My mom was thrilled and delighted to leave the facility, my dad was ready to be settled. I was relieved to have that facility in my past.

Until I started to receive requests for donations from the facility. Because they have my parents' address, they sent unsolicited requests (yes, they sent several) for donations. The greed of that non-profit institution still gets my goat.

We often focus on first impressions. I think last impressions are just as important because those lasting impressions of that facility ensure my parents, who have the means to live there for years, will never return there.

The facility has my parents' money. Wouldn't it have been better to receive their appreciation and respect?

I remembered another incident this afternoon: While my dad was in the assisted living section, his ostomy bag began leaking in the middle of the night. He called the nurse on duty, who had no idea what to do. (His bag leaked soon after he came home after the hospital. I had no idea what to do, either, but I did figure out how to change it.) So, my dad had to sit upright in bed for hours until another nurse started her shift and came to change his bag. I should have asked for refund for those hours when he didn't receive the care he needed that they billed us for.

This is the time I'm relieved my parents are (or will be again soon) on Medicaid. If the facility knows they cannot talk to the patient or patient's family about money, it is one issue we don't have to think about. However, care-wise, we're going through the same thing. Can't move them because they are at least settled and have friends. But between medication mix-ups (including an aide giving my mom someone else's meds once) and the changeover in staff, I get incredibly frustrated. Unfortunately, there aren't a lot of options when you're waiting for a Medicaid room to open up.

These are such hard and complicated issues. I noticed that you talked to a \"former employee\" of the facility. I wonder why she no longer works there??? After my mom passed while in a facility, and I had resolved in my heart and mind the difficulties of that stay, I returned to give a special Christmas gift to the woman who had made all the difference in our decision to place Mom there. The woman who had made such an impression on us no longer worked there, either. You really wonder, \"What is truth?\"