The Power of Touch #1: Dale

The Power of Touch #1: Dale 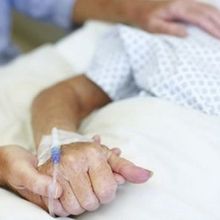 To say that Dale and I would never have become friends if I hadn’t become a hospice massage therapist is certainly an understatement.  As a university English professor (which I was in my first-act career until retiring to this new path), I just plain didn’t run into aging cowboys who hadn’t finished high school, men whose bodies showed the ravages of their hard lives—and rodeo aspirations—especially those suffering from advanced Parkinson’s Disease whose words came only in difficult stutters. Twenty years ago I would have told you I wouldn’t have known what to say to somebody like that, wouldn’t have had the slightest idea of how to brighten his day even if I’d been called upon to do such a thing.

But Dale and I did become friends—fast friends—during the eighteen months I visited him monthly to provide the hospice massage sessions his doctor, bless her, ordered.  At first he was restless and jumpy from the disease and his uncertainty about why this strange woman wanted to lay gentle hands on him (he’d always been a bachelor, a loner), but we accommodated each other and I provided “walking massages,” working his shoulders as he led me impulsively, as if driven by an inner energy that could not be contained, around his small room to make sure I noticed the framed belt buckle, the bronze bucking-horse cowboy lamp, the photo of a favorite horse in a mountain-backed meadow in central Idaho.  As the sessions multiplied, the pacing time decreased; he’d settle down and rest to focus on my touch for the last five, the last ten, then the last fifteen minutes of a half-hour session.  I often hum to patients who are anxious, and I soon discovered that the cowboy songs I remembered from the camps of my youth went a long way toward calming Dale.  The first afternoon that he actually dozed off under my hands to the sound of “My Home’s in Montana” and “Ghost Riders in the Sky” was something I’ll not soon forget.

Last December my visit happened to coincide with a sing-along offered by a hospice chaplain and his friend. Scheduled tightly, I couldn’t wait for a time without distractions, so I offered Dale a shoulder and neck massage while he sat in the circle of listeners (preening proudly to others, I might add, to make sure they noticed this special treatment he was getting). A friendly, cooperative guy, he didn’t hesitate to participate—but when we began “Jingle Bells,” with its mention of horses and sleighs, he became especially enthusiastic, belting out the words and bounding up and down, turning over this shoulder to regard me with encouragement and joy.  I obliged, chiming in with alto harmony on the chorus.  “You k-k-k-know,” he offered with a big smile at the number’s end, “You’re not bad!”  Everybody laughed, because everybody loved Dale and took delight in his happiness.

The last time I saw Dale was two months ago; he had experienced several health crises and was clearly failing, but his eyes still twinkled when he saw me.  That last afternoon he sat still for his whole massage, dozing as I hummed to him (never before has “Home on the Range” brought me to tears). I ever-so-softly cupped and kneaded his hunched shoulders, rested still and calming hands on his scalp and neck, and just held his hand.

As I finished, though, his eyes opened and fixed on mine.  “I hope,” he said—with so much difficulty, so haltingly—“I hope you”—then another pause, longer, with an infinitely struggle to get the words out in a burst—“I hope you stay around here a long time!” I’ve never had a better compliment, nor a more moving testament to friendship.

What wonders simple touch and caring presence can work—diminishing not only pain and loneliness, but also the gaps that on the surface make us appear so different from one another.