0
Outside the church where our MS support group meetings are held, my partner and I were met today by the group facilitator and a witness. They handed my partner a written warning that included this:

We talked outside the church for the next 2-1/2 hours, during which time my partner went to the bathroom twice. That gave me a chance to speak privately with the facilitator and witness -- because I agree with everything that they and the other members have raised.

This is the second warning to my partner; the first had been verbal. The first complaints go back to January of this year -- the facilitator was giving my partner "the benefit of the doubt" until a critical mass of complaints had come in, including from someone who had left the group.

When my partner asked the facilitator to elaborate on the written statement, the facilitator mentioned my partner's "temper tantrums," including the times she had "hit the table with her fists." Not surprisingly, my partner does not remember those incidents.

The facilitator had been a physical therapist until she had to stop working due to MS. She knows the healthcare system. I told her about my attempts to get help from the sheriff's office, the health department, the fire department, and DCF, and about the three therapists my partner had seen, prior to her start last week with Therapist #4.

The facilitator also said the mental health clinic in our county is pretty useless as far as my partner is concerned, because "they will do what she wants." She added that there is a walk-in psychiatric inpatient facility (in another county, about 50 miles from us) and suggested that I take my partner there. She said that just my having POA would be enough, especially if my partner starts acting out at the facility.

I'm not ruling that possibility out, but I'm not jumping at it, either. The facility could hold my partner for up to 72 hours.

O-kay. And then what? What are the consequences of that?

Living with my partner means I need to think several moves ahead, and I am a lousy chess player. Before I did anything like that I would want to speak with someone on staff, share my partner's records with them, and ask questions that can let me put a mental flowchart together -- as in Action A produces Result Q, leading to Consequence X.

And right now I don't even want to think about the logistics of getting my partner to such a facility in the first place. It wouldn't be a case of just getting her into the car and taking off. I'm talking about basic safety on the road. My partner would want to know where we are going and why, because we don't make those kinds of road trips unless she has an appointment with the neurologist or a procedure that far south of us -- and even then, the unfamiliar roads would tip her off to something. She is perfectly capable of acting out and creating a safety hazard while I'm driving.

As I told the facilitator, even with our "useless" county clinic it's a big deal that my partner is in therapy again of her own volition, because I can't force her into it. The facilitator agreed. I asked, and she said she would send me a written statement of her obsevations of my partner's behavior, that I could give to mental health professionals and others whom I could approach for help. The warning sheet has already been checked through and filed with the National MS Society.

I just need to know who's out there, whom I can approach. Because I've been knocking on a lot of closed doors, and I feel as though I've just about run out of doors.

I also told the facilitator about part of what I had posted during the last #carechat. I've replaced my Twitter name and avatar with what I use here: 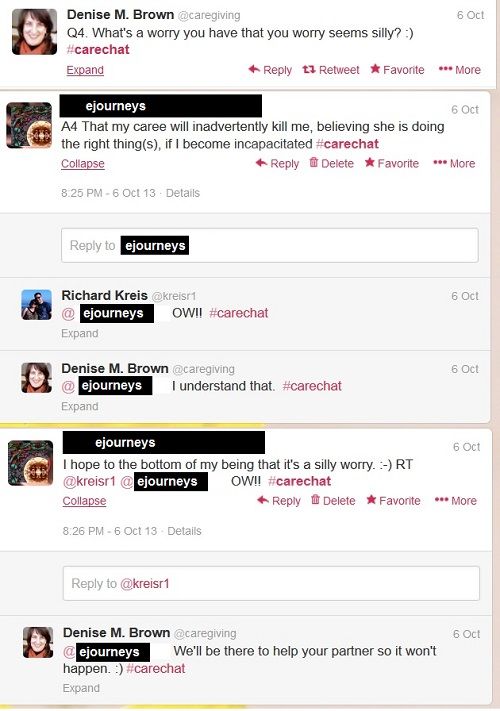 The facilitator told me that my personal safety was a topic the group members had raised as they drafted the warning. The bottom line is that they believe my worry is well-grounded.

That was an important validation for me, too. I had dearly hoped I was overreacting, especially since I had raised my safety concerns to the public servants mentioned above, to no avail. The facilitator agreed when I told her that several years ago a friend and retired lawyer had told me to abandon my house.

I said that if it comes down to the house or my life, I have to choose my life.

I shed a few tears during the talk, out of a sense of relief. I felt supported and believed, validated because these people saw what I saw and experienced what I experienced, within the context of a monthly meeting. As things currently stand, my partner has not been ejected from the group, but if it comes to that I would still be allowed to attend. That means a lot to me.

My partner still doesn't get it. After her initial acting out when presented with the warning, plus her two bathroom stops, she calmed down. But she then asked about minutiae and claimed she wasn't being communicated to sufficiently. After we got home, she described acting-out behavior that she had witnessed in her past, in school, and used that to explain her behavior within the group.

I've checked the inpatient facility online and it seems geared toward drug rehab, which is not my partner's issue. I've emailed the facilitator asking about that, and I also want to get her input on whether my various recordings and transcripts of talks with my partner might be helpful. I've submitted several of those to various people in the past, but so much seems to fall into a black hole.

Positives from this past week: I was able to sneak my partner's neurological and other records to her new therapist, who confirmed that she had received them and that they are "very helpful." We should get the initial assessment in about a week.

I also successfully dissuaded my partner from calling the cops on a neighbor, who is a Girl Scout leader. The neighbor had asked about the raised bed walls in our yard, which I had used our first summer here for growing vegetables but have not used since. Turns out the Girl Scouts are doing a gardening project.

My partner remembered our (admittedly bizarre) visit last April from a plainclothes cop, who had asked about our water barrels and who had told us that such barrels are used by pot growers. Partner was coming up with all sorts of scenarios concerning our neighbor and feared that giving her our raised bed walls would make us accessories to crimes.

I tracked down our area Girl Scout coordinator on the Web. He gave a glowing testimonial about our neighbor, which I was all too happy to pass on earlier today when I made my donation to the Girl Scouts. :-) 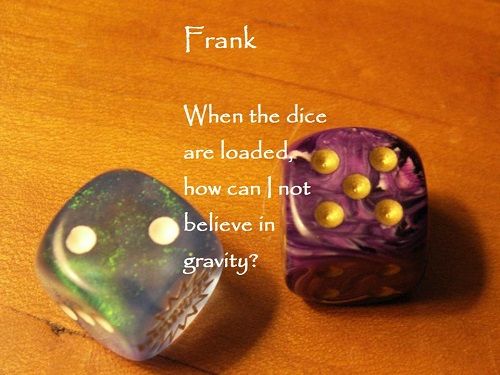