The Sound of My Fury

The Sound of My Fury 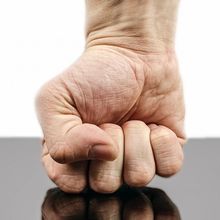 My mom seemed to be on the road to recovery, transferred out of ICU and to a regular room on August 1.

Perhaps her body was simply adjusting to all that's happened.

Unfortunately, the bloody stools appeared again on Tuesday. It seemed she started another bleed but the doctors could not pinpoint where. We decided to ask about another hospital which had better technology to solve her problem. I asked this question of a surgical resident during his visit on Tuesday evening. A sibling (I'll this sibling "Sibling") stopped by the same night. Who could help us figure out if our mom needed to be transferred, we wondered.

So, Sibling and I arrived at the hospital early Wednesday morning to discuss options with her doctors. As luck would have it, her primary care doctor and one of the gastroenterologists showed up at the same time. I asked, Does another hospital have better technology that would help our mom? Her primary said, "If I thought she would get better care downtown (at one of our larger university-based hospitals), I would send her there. They're doing here what they would do anywhere else." I shared the update with my siblings and thought, Well, we're doing everything we can.

Later that night, my mom called, frantic and upset. She's still bleeding but they don't know where. She wants to be transferred because she's not making progress. I explained that she is making progress and the last piece we have to figure out is the internal bleeding. I assured her we would discuss this more tomorrow morning with her doctors.

After the phone call, my dad and I again discussed what we could do for her. We agreed we didn't want her transferred without a very good reason. I called my younger sister to talk it out and again expressed that I didn't want our mom transferred.

On Thursday morning, my mom called to let me know that her primary stopped by with interesting news: One of the large university hospitals has a longer scope which will help to better pinpoint the source of her bleeding. The hospital she's at doesn't have this.

I did not believe this was a good enough reason for a transfer. The community hospital found and stopped other bleeds. She bleeds again. In my mind, the problem is that she bleeds. We don't need another diagnostic tool but a treatment to ensure she simply does not bleed again.

Before leaving to see my mom in the hospital on Thursday morning, my dad and I again agreed that we didn't want her transferred.

I arrived at the hospital to a mother in a foul mood. And, that doesn't even really begin to describe her disposition. She wants to go to this other hospital, she told me. "If you go there," I said, "it's going to be hard for us to visit you like we can here."

She grabbed the call button and beat it against the bed rail. She yelled that my dad told her the same thing. (My mom counts who visits and how often they visit. She's miserable without our visits. I didn't want to face her questions about when we'll visit if she moved. It would simply be impossible for us to be as present as we can be at the community hospital.)

"What would you do if you were in my position," she yelled.

Well, I think I would be grateful for this incredible group of health care professionals and family members who have been doing everything humanly possible to keep you alive.

I didn't say that. I also didn't stay long because she continued to yell at me.

My dad was not in her room but in the cafeteria. I walked all over to find him and to tell him to just go home rather than subject himself to her mood. Throughout her hospitalization, she has been horrible to my dad. She is pissed at the possibility of dying before him. And, I mean pissed.

I couldn't find my dad so decided to stop at home before I hit the road. I had to be in Clinton, Iowa, for a work commitment in the afternoon. My dad wasn't home but Sibling stopped by to drop off a few things for my dad.

So, I got in the car and headed to Clinton. I checked in with my dad after I arrived. I shared my concerns again about a transfer but it sounded like my dad was now in agreement about a transfer. Uh, oh.

I was pissed. I sent a text to two of my siblings sharing about my anger. I hold off on replying to Sibling because, well, I'm trying to focus on the solution--getting my mom better.

Of course, the transfer can't happen without the stickiness of red tape. Her insurance initially denied the transfer because the university hospital is out of network, it said. We know this isn't true because my father was at this hospital after his surgery in March. Because I'm gone, my dad spent 2 1/2 hours on the phone with the insurance company. Sibling doesn't help.

On Friday morning, one of my brothers sent a text to all siblings concerned about the transfer to this university hospital. It's all semi-private rooms, it's busy and hectic and overwhelming. I followed up with my own concerns:

It seems that Mom has recurrent bleeding. They've found and stopped bleeding. She starts another bleed. What hospital can treat that? Is there a treatment for what Mom has? What's the risk of another scope on her already compromised system? Will another scope cause more bleeding? That she is not eating is another huge concern. Mom obviously has the final say in her care. I wonder if an honest discussion with Mom has occurred? Is this an informed decision? It's great (university hospital) has a longer scope. But is this what Mom needs?


In my mind, my mother has made a fear-based decision. She hasn't weighed any pros or cons, received enough information about the scope and talked it out with anyone. She's afraid she's dying. I get that. So, rather than a longer scope, perhaps she needs emotional or spiritual support.

I did not receive a reply. Sibling, who told us twice she will be at the hospital Friday morning, did not show at all on Friday. Another sibling visited in the afternoon and prompted by my text, asks my mom if she would like anyone to visit her, like a priest. My mom refused.

Finally, late Friday and soon after I returned from Clinton, my mom received word she will be transferred in the morning. I arrived at the hospital at 7 a.m. yesterday morning because I'm not sure when she'll go and if we'll run into more snafus.

We actually do run into one -- something we never considered. My mom has stopped bleeding. Her hemoglobin has been stable for 36 hours. Her doctor stopped by at 8:30 a.m. and we discussed this new, well, complication. He said that the transfer should still happen. Ninety minutes later, she's wheeled out of the hospital.

My dad, two siblings (who arrived just as my mom left) and I went to the university hospital for a short visit soon after her arrival. Her semi-private room is cramped, it's hard to visit and it's hard to get comfortable. Honestly, it's awful. Sibling is not one of the two siblings who visited.

Fast forward to this morning. My mom called to let us know that because she's no longer bleeding she can't get the scope. The scope is only used when there's bleeding. Makes perfect sense now that I know that. My mom moved to another room because she hated her original room. She had a terrible day yesterday because the hospital is horrible. When is someone coming to visit, she wanted to know. Sibling, who assured us an early Sunday morning visit, finally got there at 11:30 a.m. (I guess "first thing in the morning" really means around lunch time.) Sibling sent text messages with questions from my mom about when other siblings will be there for a visit. My mom wanted to know who will visit and specifically when they will arrive.

As of this writing, the plan is to watch my mom today and transfer her back to the community hospital tomorrow. Will her insurance approve this? We don't know. If they don't, she'll remain at the hospital she hates until she can be transferred to rehab. I've got a nursing home lined up in case she can't be transferred to the rehab unit at the community hospital, our first choice.

So, the sound of my fury is

I was gritting my teeth while I was reading this. People's frustrations cloud their judgment and they arrive at these grass-is-always-greener-on-the-other-side that not only are not greener, they just backfire.

First, thank you all so much for your comments_mysql. :) I sooo appreciate all of them.\n\nSibling has long (it's been decades) caused issues in the family. We do our best to manage Sibling's irrational and inappropriate behavior but it's difficult. We show grace, regularly forgive and ignore the bad behavior.\n\nSo, last night, my mom called begging my dad and I to move her back to the community hospital. She said the surgeons confirmed they would not do the scope but she could stay for a few more days for other tests/procedures (we don't know what they are). My mom refused and told them she wanted out. \n\nSo, I sent a text to the siblings that Mom wants to go back to the community hospital but the surgeons offered additional tests. Sibling replied that Mom should stay for the tests. Oh, wow, I thought, how am I going to navigate this one. I decided to take a walk. When I returned home, my dad was siting with the phone in one hand, his head in the other. What's wrong?, I asked. Sibilng called, he said, and wants Mom to stay. He replied he wants to do what will make Mom happy. So, Sibling hung up on him.\n\nAt that moment, another sibling replied back to Sibling that we should do what's best for Mom's mental well-being. The decision to move Mom was wrong and needs to be rectified.\n\nA few hours later, Sibling sent a reply--\"take me off this thread. I don't deserve to be treated like this.\"\n\nSo, of course, my mom calls us to let me know that they will do the scope today. \n\nI sent a text to all the siblings (choosing to ignore Sibling's earlier message) to let them know about the scope. Sibling replied: \"No need to text me anymore. Thank you.\"\n\nOnward we go.

I have been there re: the sibling frustration so many times! I am so glad the bleeding stopped, Denise! May it remain so. Under stress, no one is at their best. My sibling relationships have changed through this process, not for the better. It's a hard thing to accept.