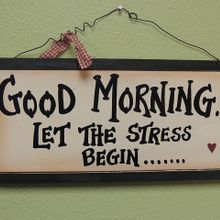 (Editor's Note: We welcome a new blogger to our team today -- Sena Re. Please feel free to stop by her profile page to learn more: @senare.)

I was raised by my grandmother on her own since I was three. I have never bothered hiding this because I see no reason to be ashamed of it. I'm proud that because of her I am who I am today. After high school many people (members of my family included) did not agree with the fact I didn't move out, I didn't get a place of my own.

Many thought that I was being a freeloader. But the truth of the matter is living on my own scares the hell out of me and eventually, it came down to the fact that I couldn't live on my own because of health issues. (You try holding a frying pan or even a fork when your body doesn't want to cooperate.) Then Gramma started losing her sight and the family started talking about how relieved they were that I was still living with her. I am the built-in caregiver and they didn't have to.

When we moved to Missouri it was to be closer to family and while I enjoy being back in my hometown I can't begin to describe the relief that I feel from the last two months of being close to family.

On April 3rd I took my grandmother to the emergency room because she was complaining about dizziness and the doctor set up an MRI for her on April 6th. When we got home we had a message waiting for us on the answering machine: The doctor wants you at his office ASAP. We were scared, understandably so.

After several hours sitting and waiting and a few more tests run we were called back to a room in which the doctor came and sat down. The MRI had shown several mini strokes had taken place in the brain stem which was affecting her equilibrium.

While my grandmother processed what was being said and tried not to break down I took a stand. What can we do to prevent any more in the future? The answer was simple - at least I thought it was at the time. Medication and physical therapy.

She did well for awhile after that. I know she didn't accept what the doctor said, I could tell by the way she kept asking what could have happened. Why wasn't she able to tell there was something wrong? The truth of the matter was there wasn't an exact time period when it happened and they were so minor that they could have happened in her sleep.

In the beginning of May, she became sick to her stomach and because one out of the three enzymes that indicate a heart attack was elevated they had her admitted. Everything would be okay, or at least we thought. She came home and on the morning of May 2nd, I called 911. Her left side was weak but the ER didn't find anything. We told them that an MRA had been scheduled for that day so they quickly discharged us and sent us on our way.

She couldn't get in and out of the truck on her own, I had to pick her up and carry her. I had to have a wheelchair because she couldn't walk. Thankfully our church had a wheelchair that we could bother and on May 3rd I wheeled her into the doctor's office for a checkup and he suggested to be admitted to the nursing home's physical therapy ward.

They were fantastic and on the second day someone from physical therapy came in to evaluate her and was impressed that for her age (she's 86) and what happened she could stand and balance fairly well. Then she did the one thing that made me so proud of her, she asked him what she could do in her room while watching TV that could help her with her recovery. I think that as much as her determination is why today, just short of the two-week mark, I was able to bring her home. She's walking better than before all of this started and she has accepted that she had a stroke.

Here's to seeing what comes next and hope that it can only go up from here.

Thanks for joining us and sharing your story. I look forward to hearing more about your grandmother's recovery.

Welcome! Thank you for your post. The love you have with your grandmother is so lovely. You are blessed to have each other. She is blessed to have a caregiver who stands up for her and has her best interest at heart. I look forward to getting to know you.

Welcome Sena Re! I'm so glad your Grandmother did so well after her heart attack and stroke experiences. It sounds like she's doing well cognitively and emotionally, too. I'm glad she has you - and you have her. It's a challenge to be a caregiver when you also have health issues of your own. I have Parkinson's, so I understand what happens when your body doesn't cooperate.