The Toaster Was a Hit

The Toaster Was a Hit 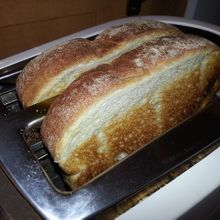 My parents moved to their apartment in an independent/assisted living community yesterday. The community sits in the heart of our suburb, down the street from Trader Joe's, across from the library, blocks from their church and a short drive to the senior center. It's a perfect location for my parents, who want to remain as active as possible in the community. My dad still drives (for now) but the community has a driver (and van) at their disposal. During the winter months in Chicago, a driver other than me will prove to be a godsend.

I organized the move so that parents arrived to an apartment yesterday that was a mini version of their house. On Friday night, one of my nieces and I set up their kitchen, complete with stocking the fridge and cupboards with staples for a light meal or breakfast. (They'll eat two daily meals of their choice in the dining room.) I bought them a coffeecake for their Sunday morning breakfast so they could relax on the first morning in their new home. The movers arrived at about 8:45 a.m. on Saturday morning and had the majority of furniture and boxes loaded on the truck when my sister, brother and sister-in-law arrived at about 9:15 a.m. We arrived at the apartment at about 10:15 a.m. and had unpacked and organized their apartment at about 1:15 p.m.

I arranged for my niece and sister to pick up my parents at the nursing home, pack up their belongings and bring them to the new community for lunch. By the time they finished eating, we were ready to unveil the apartment to them.

Before my parents arrived, my sister-in-law said, "Oh, your mom is going to cry at the sight of this apartment! It looks sooo good." And, it did. If you stopped for a visit, you would want to stay. It looked that inviting.

But, I know my mom. I didn't hold my breath for the tears.

We took them on the tour, showing them each of the three rooms, pointing out the items we moved that we thought they would appreciate. My parents were happy with the apartment, grateful for what we had done.

When we arrived at the toaster, shining on the kitchen counter, my mom clapped her hands and expressed sheer delight at its appearance. "My toaster," she exclaimed. "Look at my toaster!"

The toaster was the hit of the apartment. Ironically, Sibling, who would not help us at with the move, had purchased a new toaster for my mom. Sibling's contribution was buying my mom a new toaster which I packed, moved, unpacked and placed on the counter.

Later, out of ear shot of my parents, my sister-in-law shared her utter disbelief at the big deal my mom made about the toaster. "That was so wrong," she said. "You did soooo much for her. But the toaster was what she was most excited about. That was just so wrong."

I do a lot for my parents. Not really because they will appreciate all I do. And, I don't mean to imply they don't appreciate my help. They do. And, they express their appreciation. But, I know that someone else will do something trivial (like buying a toaster) for my parents that will illicit a huge response from them. So, I help not really for them but for me. I help so I know I've done my best, so I won't have regrets, so I can sleep at night.

I help because, in my mind, it's just the right way for me to be.

As I was reading this, <a href='http://www.caregiving.com/members/denise/' rel=\"nofollow\"><a href='http://www.caregiving.com/members/denise/' rel=\"nofollow\">@denise</a></a>, I started thinking about children who are abused. They tend to cling to the abuser, wanting to please them. I can't help think of this in reverse with your mom and Sibling. Although you are the one who does so much, Sibling seems to withhold her love/attention to your parents at her wim. Maybe your mom is thrilled because any little jester may be so welcome.... and a reassurance to your mom that Sibling does care? just a thought.\n\nBut for whatever reason, it is still so frustrating to be the one neglected.... although you don't do it for the praise. You do it for love.\n

I can understand the Toaster thing, it happens with me and Elly too. I have to think of Toaster Sibling and just giggle. You are so much more!!! Yes, you can sleep at night and we don't know how the story really will end. We all need affirmation and positive reactions to our caregiving sacrifices :) - at least once in a while. What a joy to be able to set up your parent's new place, kinda like when some of us set up our first apartments and the parents let us take some stuff from home! I am sure there is still some unsettledness at how permanent this arrangement will be, but I hope all the familiar things keep your folks comfortable with their decisions!

So frustrating to hear this. And Sibling is then justified in having done her part. If she had been helping all along, you Mom's excitement over the toaster wouldn't have phased you.

A toaster? Seriously? You can't make this stuff up!

Oh Denise. I understand your hurt feelings. It's a strange thing in life sometimes. Your SIL gives a toaster and your Mom is totally thrilled by a bread gadget. All I can say is that what you have given and I am sure will continue to give is something which cannot be bought and that is your heart! What you do, how much you care, always being there for them, gosh, we should all be so lucky when we get old and ill to have such a special child who is willing to be there for us in every possible way. I would not swop one moment of the obvious care you regularly offer your parents for a million shiny toasters! Toasters and the people who bring them - they come and go. But the love you give is so incredibly precious and all of us can only hope that when we too are old - that we will be smart enough to know the incredible, uncountable value of what you bring into these two old people's lives. You are human and as such would also like to get a 'high five' for all that you do but nothing goes unnoticed and with each bit of care you lavish on your parents, you just become more and more of an incredibly special person. \nPeople who say that they can see aura's around people (just as all angle pictures show us this wonderful, glorious halo of light around the angels) - you are literally a shining example of a daughter who has got all her priorities spot on. I salute you on behalf of all the children who take care of their parents!\n\nColette xoxo