0
After going through a period of time when we weren't handling anything well, my husband and I sat down and looked at all the changes and challenges we'd been through in recent years. It was impressive.

2007 - We lost my mother-in-law and her two brothers in 11 weeks. I was diagnosed with Parkinson's disease. Two weeks after I left teaching for good, my cousin died of ALS. On the day of his funeral, one of my former kindergarten students (then a young woman) was brutally murdered. 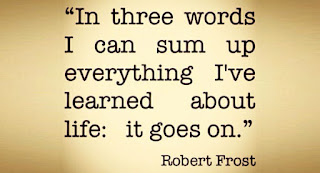 Since then, our oldest son and his girlfriend moved back to Colorado, got married and had three babies--in 2009, 2011, and 2013. Oldest son also started teaching at the same high school he had attended. Our younger son, who had moved back home after college, had a grand mal seizure and suffered a compression fracture in his vertebrae. He was also diagnosed with osteoporosis--one of those non-marketable effects of Dilantin. My husband retired after 30 years of working at the university library. Six months after he retired, he had a grand mal seizure and broke his collar bone, the same week that Mom went into her psychotic episode. Our daughter graduated from high school and during her "gap" year raised a puppy for a service dog organization. Oh, and I was also flying back and forth to Chicago with her for treatment at Shriner's Hospital. She had her last visit this summer.

This is just a little of what has been happening in our lives in addition to suddenly becoming a caregiver for my parents. My husband and I realized our lives had been so eventful, it would be unrealistic to think we'd always handle things well. We need to be very forgiving of ourselves and each other.

Then, in the spring of 2014, a number of things happened all at once. Our granddaughter became very, very ill with pneumonia and sepsis, right after her first birthday. She came through it okay, but it really shook everyone. My daughter-in-law, who had a history of depression, really crashed afterward and was finally diagnosed with bipolar disorder. My husband and I were on call 24/7 to come help or come and take the three little ones home with us for awhile.

At the same time, Mom was becoming more and more unstable and she would call me in tears. She would tell me she was sick and Dad was sick and she needed me. Of course I went, only to find them just fine at home. Mom was going through panic attacks many, many times each day. It took weeks for me to figure out what was happening. She would complain about the PACE program getting her meds mixed up. I finally found out she was taking more of her Clonazapam than she was supposed to, then running out and going through withdrawals.

I was racing across town to my parents' house and spending much of the day there, then coming home and getting a call to go help with the grandkids. Sometimes I had a whole 20 minutes in between.

After trying various tricks to stop Mom's drug abuse, I went in to see their doctor without them. I said I couldn't do it anymore--not with them at home. I had been through Mom's drug abuse before and I wasn't willing to do this now. I called my sibs and told them the same.

Our grandchildren needed to be our top priority.

Goldie, isn't is mind boggling to look back and see it all summarized (and I'm pretty sure there are more sprinkled between the major highlights, My grandkids were the joys that gave me amazing lifts during caregiving.

I love that you recounted all that's happened, Goldie. I do think we have a tendency to overlook all the challenges we've had and yet how we've also made it through them.\n\nI also love how you focused on your priorities--the grandkids. And, I love how you communicated that. Sometimes, we decide what's important but forget to let everyone else know that. :)\n\nYour story continues to intrigue and amaze me. As always, I'm looking forward to next.