The Value in 'I Love You'

The Value in 'I Love You' 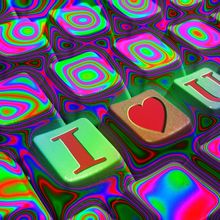 One of the things I have been working on lately is not asking Marc fifty times a day if he's okay. He has told me many times that he hates when I ask it, but he knows I need to do it. I do it because he isn't very forthcoming with the necessary information. However, I have made a very conscious decision to not ask him that question more than twice a day. Instead, when I feel the need to ask him. "How are you feeling?" or "Are you okay?" I simply replace those phrases with, "I love you." Then I wait for him to respond.

I probably say it fifty times a day, but he seems to mind a lot less. What I have noticed is that I can tell just as easily how he is doing by the way he responds to that as I could to how he responded to me asking him if he is okay. The rate of speed of which he responds to it, the tone of his voice, the eye contact, and the expressions on his face are all indicators of how he is feeling. I reserve asking, how are you feeling, for my midday calls from work and right before bedtime when I ask him, "So how did your day go? Any issues to report?"

I understand why he doesn't like being asked the question of 'how are you?' I really do. As a 35-year-old person who really should have his entire life ahead of him, it is a constant reminder that he has had way too much taken away by this illness. Even though he is on a path to recovery, it is becoming clearer to him, myself, and his doctors that it will be very challenging for him to go back to anything resembling normal. Although his mind is very much intact, he processes things much slower than he used to which makes going back to the line of work he loves nearly impossible. Though I am still trying to remind him that even at a slower pace, he can do so many other things.

I've seen a positive attitude change in him from switching gears and allowing him to just be. Plus, who can really fault someone for telling them they love them multiple times a day? It helps to say it and it helps to hear him say it back.