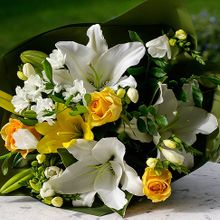 In 2015, during my parents' ongoing medical crisis, my oldest sister stomped her foot and said, "I'm out!" Although angry with me and one of my brothers, she also also decided to stop having contact with my parents. She does not reach out to them during holidays, their birthdays and other special family events. (Read 10 Ways to Get Even with the No-Help Sibling and Sibling Strikes Again.)

Over the past 12 months, we've seen Sibling five times. We attended three memorial services -- for her husband's aunt and uncle, for his father and then for this mother. We also attended a bridal shower and wedding for my niece, Sibling's middle daughter. Each interaction fills me stress and anxiety, not so much because of what Sibling will do but because of how my father will behave. He feels so much hatred for her because of how much Sibling has hurt my mom. My father was never one to control his temper. At 88, his rage has lessened but still roars when he's really angry. When Sibling spoke at her the memorial service for her husband's aunt and uncle, my dad whispered, "She's such a hypocrite!" I should mention that my dad's whisper is similar to our loud talking.

The stress around my niece's wedding was particularly intense. Claire's wedding happened the day after our NJ Regional Conference. I arrived home from the conference on Saturday evening, then picked my parents up at 9 a.m. the next day for our drive to western Illinois, the site of Claire's wedding. After arriving, we immediately began getting ready for the 4 p.m. ceremony. The guilt got me while I helped my mom style her hair. She shared that my dad had used the curling iron on her hair the evening before. I wish I had been more organized and arranged an appointment for my mom to get her hair and nails done. I was just so focused on getting us through the wedding without an incident that I didn't spend much time thinking about how we looked. Honestly, I bought a sweater to wear with a skirt at the hotel gift shop just a few hours before the ceremony.

We did manage to make it through the wedding. We were seated in the far back of the room, which hurt my mom. (Can you imagine sitting the 85-year-old grandmother of the bride in the far back corner of the reception?) When Sibling and her husband got up to make a speech, my dad excused himself to step outside. My brother followed. Then, my mom decided to leave so my sister-in-law and I helped her up and out. We chatted outside, rolling our eyes about Sibling, but keeping the conversation light and casual. My dad was wise to leave and we felt good following him. We only returned after the speech ended.

At one point during dinner, my mom began to cry, putting her hands over her face. "I have a (insert swear word) for a daughter," she repeated three times. We did all what we could to comfort her.

Later, my sister and I helped my mom to the restroom. We walked past Sibling on the way back to our table. She walked over to my mom, gave her a kiss and asked, "How are you, Mom?" My mom shot her a look full of daggers and said, "I'm tired." We continued walking.

We left after dinner service. My parents were exhausted. My brother, sister and I were drained. (My other brother, who also earned the ire of Sibling, couldn't make the wedding.)

The next morning, we gathered for breakfast before hitting the road to return home. We chatted and laughed and enjoyed good food with my sister, brother and their spouses. The wedding was behind us which meant we could enjoy our time together. Later, my parents told me that the best part of our trip was the breakfast the next day. That's really when our family gathered to celebrate.