The Week In Review

The Week In Review

As she does frequently lately, my partner asked me what emotions I was feeling.

I told her I felt very thankful that I had my eReader with me during her five hours of prep time prior to her 20-minute foot soak on Saturday. She told me at 3 p.m. that she was ready to get started. The soak itself didn't happen until almost 8 p.m.

She had needed me there for input and for some assistance, but otherwise she moved at her own pace. That meant taking a couple of breaks for food, for fretting and complaining, and for navigating her piles of stuff to find what she wanted. My partner's foot soaks have been major undertakings, as described in this entry, but I think five hours of prep sets a new record for us.

At times like these, I have learned to back off. I think that part of the secret to my patience is knowing when to find something else to do while waiting for my partner's requests, so that a bunch of $#&! doesn't fill my head. I've had to learn that even though I reside in the shadow of her needs -- especially during what to me seems like a long, drawn-out nothing -- I can still take some of my own time to fulfill some of my own needs. These days my eReader has been a sanity-saving escape for me.

We've had an interesting week.

My partner's toe (the one that had toenail surgery late last year) had been bothering her. We went to the podiatrist two Fridays ago; he found a couple of nail roots that the acid had missed last time. This past Friday he did his best to finish the job.

Two Fridays ago, as we were about to leave for that appointment, I noticed our mailbox was down on the ground and a white SUV was parked on the lawn, though not in a way that suggested it had run into the mailbox. A man exited the SUV and identified himself as a plainclothes detective, then questioned me about our rain barrels. We have four -- two that I had bought shortly after we moved here 10 years ago, and another two that we had put together at a rain barrel workshop presented by the county extension school.

The detective wanted to know what we used the rain barrels for. (We had a vegetable garden our first year here, but haven't grown them since.) My partner has a starter live oak that she's grown from acorn. It's been growing in the window and she wants to plant it outside (another one that she had planted years ago is now huge).

(I didn't say that during our first year here, my partner had insisted on collecting rain barrel water with which to flush the toilet, or that a bad fall while she was hauling a bucket resulted in a trip to the emergency room and her knee getting stitched up.)

After the pre-surgery podiatrist appointment I called the Sheriff's office, which confirmed that the detective worked for them. According to the detective, rain barrels are signs these days that point to marijuana cultivation.

I don't know what or who knocked down our mailbox. I didn't watch the plumbers pull out on the previous day; they might have accidentally backed into it.

This incident has ramped up my partner's paranoia index considerably. She's been sending me articles on informants and property grabs. She thinks the detective might have purposely knocked down our mailbox. She wants us to get a new mailbox that's cemented into the ground. She talked about moving some smaller water receptacles inside and had a list of similar tasks she had planned to do before this past Friday's toenail surgery, none of which got done (I didn't expect them to be).

I listened. After she was talked out, she thanked me for listening.

I take deep breaths during my partner's tirades. Sometimes I close my eyes. She doesn't notice, so I have learned to feel comfortable taking a meditation break and letting her fretting become a buzz. Better that than to let my mind erupt in $#&! filled impatience. The better I can become a shadow, the less likely I'll explode.

The detective incident alone was enough to get her going full-throttle. But there was more.

On Monday our A/C had its annual checkup. The tech remarked on all the foam pads my partner had stuffed into the air exchange area -- "to keep bugs out" according to her. My partner argued with him that the pads needed to be there and that she wasn't blocking airflow. The tech tried to explain to her how the pads lower the unit's efficiency. After several unsuccessful tries at explaining, he gave up and went back to work, especially since he wasn't being paid by the hour for the job, just a flat fee.

I followed him out of my partner's earshot, said that I was the homeowner, and explained that my partner has brain damage, without going into any further detail. I asked whether the foam pads could damage the unit.

He said no -- they just make it less efficient by changing the static pressure. I explained that I have to weigh what is good for the house against what upsets my partner. If the pads don't damage the unit, I can put up with less efficiency.

Afterwards I searched the web for static pressure and printed out info for my partner, who seems to be coming around to the tech's point of view. She countered that the tech hadn't explained things to her in sufficient detail.

(That's hard to do when one is being constantly interrupted by someone who is sure of what she does and who insists that she's "learning to stand up for self.")

On a positive note, while the tech performed his checkup my partner noticed a snail in the garage. I took advantage of the photo-op: 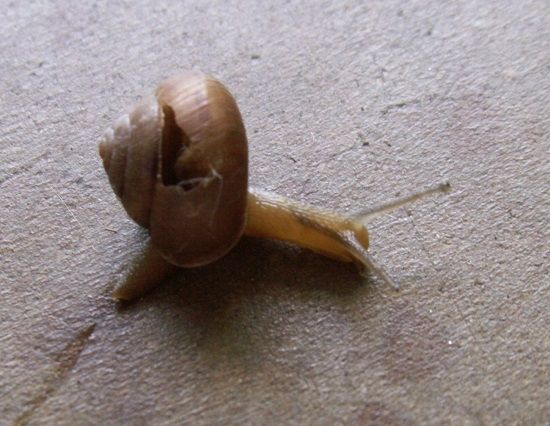 The Toilet Saga also continues, in the form of a couple of slow leaks. This time my partner had called the plumber after hours and left a message with more explanation, after we had already set up an appointment for last Tuesday.

My partner had insisted we call during last weekend and went ahead on her own. I picked up the phone and was quick to tell the front desk that we didn't need anyone immediately, especially given how much they charge on weekends. My partner wanted to be sure we were early in the queue. I also pushed our appointment back to Tuesday, reminding my partner that we already had the A/C checkup appointment on Monday.

The morning call to give us an ETA on the plumber never came, but I had set my alarm early so that I could be ready just in case. That was fortunate, because my partner was still asleep by the time the plumber arrived, and the way to one of the bathrooms is through the bedroom. I had several questions, which I could clear up at the front door to my (though not to my partner's) satisfaction. In short, the toilets needed a settling in period. The leaks are very slow leaks, just a few drops. I learned how to test for a couple of things and got clearance to add more caulk, etc. etc. The plumber said to call next week if we still had a problem.

My partner has been futzing with the toilets and complaining. I keep my fingers crossed.

To decompress, I've taken advantage of the glorious weather we've been having here. I retreat to the porch with my journal and eReader. 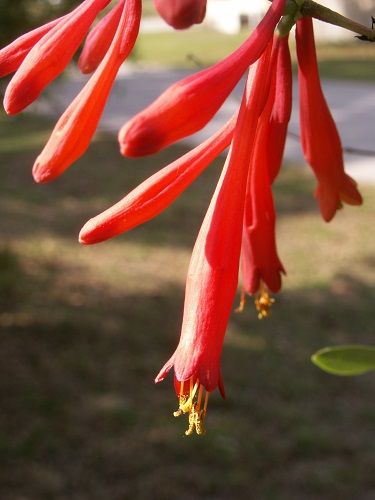 (Trumpet honeysuckle in the yard.)

I remind myself that right now I'm not even dealing with any medical emergencies here -- just...

Another layer has to do with my partner's genetic profile, which recently came through. Among other things, it shows her at an increased risk for Parkinson's, diabetes, and Alzheimer's, along with the MS she already has.

Genetic heritability accounts for 27% of the Parkinson's risk and 26% of the diabetes risk, but 60-80% of the risk for Alzheimer's. My partner's risk of developing it is about twice that for people with her ethnicity. (Outwardly, she was more upset about the diabetes, for which her genetic risk is also about double.)

I'm sure there's a lot going on under the surface. Any way you slice it, the genetic report + toenail surgery + plainclothes detective (!) + downed mailbox + A/C checkup + new toilets can lead to flailing. Her normally high anxiety has been on steroids.

It's all left me rather numb and, at worst, nauseous (at which time I had called for a time-out). My concentration's been pretty well shot. I know my partner is dealing with a lot, as best she can. Me, too.

One bright spot during the week came on Wednesday. My partner had found a calendar page that I had printed out for her last summer, with the names and meeting times of support groups she'd expressed an interest in.

The calendar was out of date, but my partner found a "Living a Purposeful Life" 12-step group that meets at a church just a couple of miles from us. My partner had attended Al-Anon meetings years ago.

I had never been to a 12-step group, but I was thrilled at my partner's interest. This group is an all-purpose one. I thought that was a good strategy, given that our area's population density is low.

Four other people were at the meeting, which was gentle and very welcoming. I didn't say much (my partner did most of the talking during the hour), but I did all of the crying. It came as a steady, silent leak, and it took me a few minutes to realize that I cried from a sense of relief. I felt I could sit with these people and be myself, including in tears, outside the privacy and isolation of my home.

My partner hadn't realized that I had cried during the meeting. (She did notice and commented on a bird outside the meeting room window and interrupted another speaker to point that out. It was a patient group.) She later confessed to me that she had hoped I would go to the meetings "for own self-improvement."

I said that it seemed to be a warm and welcoming group. (The meeting room had a Family Caregiver book on its shelves, that I want to take a look at some time.) My interest is in supportive community, period. I told my partner that 12-step or no 12-step didn't matter to me. The people and group dynamics did. This particular group is fairly new and has been meeting for only about a month.

My partner said that she might not be able to make the meetings if she gets a job through the ICCD Clubhouse. This is the clubhouse to which she had been referred years ago, that she hasn't gone to yet. I'm not holding my breath.

After the meeting we walked on the church's meditation path, a beautiful trail encircling the building through stands of pines, with plenty of benches. 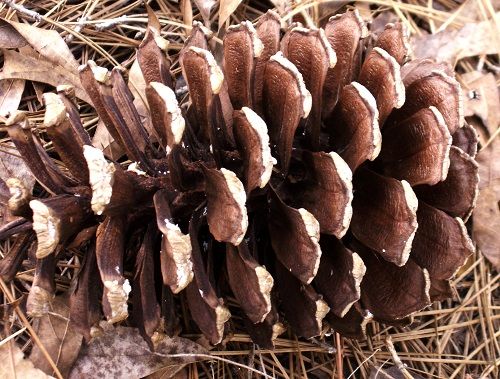 Any $#&! in my system dissipated in the shadow of the trees. I take my respite where I can find it -- on the porch, in a book, on a path, in a slow walk, among friends both old and new.