I missed doing last week's prompt so I'm combining it with this week's. :-)

I've just listened to NPR's show On Point, hosted by Tom Ashbrook. His topic was, "A New Way to Care for Patients With Dementia" (or, as one caller pointed out, an old way that's being revived). His main guest, Tena Alonzo, is education and research director at Beatitudes Campus in Phoenix, AZ. Alonzo was joined by Mary Mittelman, nationally-recognized Alzheimer’s researcher and professor of psychiatry at New York University’s Langone Medical Center.

You can listen to the 45-minute show here.

Beatitudes focuses on personalized care, rather than on having an automatic reliance on drugs and restraints. Not only does this approach provide comfort, it's been budget-neutral.

One caller's story not only anchored the theme of personalization, it presented a solution that I think is terrific.

Holly, the caller, had been a long-term care nurse. "I worked in a very upscale retirement community," she said, "and we had a resident who had Alzheimer's for more than ten years. She had no family, no visitors, and she was a very combative person. And in old terms, we would say 'non-compliant with care,' which is a horrible thing, but that's what we nurses used to have to write, 'non-compliant.'"

This resident had been highly unpopular with the aides. "'Oh, I can't stand her,' they'd say. 'She's so mean. She bites, she kicks...'"

Holly searched for information on who this resident was. "After ten years of this poor woman just being rolled over and cleaned, I finally found a distant relative out in California. And I gave them a call and I said, 'Could you please, could you give me her dog's name or something familiar, that I can say to cheer up her day or to make it easier?' They actually told me that she had been brutally gang-raped in her 20s.... and was never able to be touched."

"And you didn't know," Ashbrook said.

"Yeah. And here we are for ten years rolling her over and cleaning her because no one knew what to say to her. And when I did pull the aides aside to tell them this, of course they cried. They were doing their job. They're busy. You're going patient to patient. But it is so important what Tena is doing to understand who your patient is."

It drove Holly to devise a solution.

"I'm not even a technology person," she said, "but I put some money together and...if I could get somebody who was pre-Alzheimer's, I put together this script as a nurse for them to go on this interactive touch screen program and answer all the questions that we'd need to know that Tena was talking about. Do you like to go to bed early? What do you eat? So that nurses, when this person is admitted into the nursing home, can actually see and hear their resident as the whole person."

But what about the resident's combativeness? "She still needs a bath," Ashbrook said. "How did you change your treatment?"

Holly said, "he second you know your patient, now that these people knew that this was a person who was so traumatized, you could imagine that suddenly you're thinking about who this person is, rather than it's my next resident whom I've got to give a bath to....Now we know the person and that gentle, loving care, and even if they're combative, even if there is that, you are talking and you are loving and you are taking care of the human being rather than the Alzheimer's."

When someone with dementia is afraid, Tena Alonzo added, the words that she uses to help calm the person are, "I will keep you safe. I will stay with you."

I love the idea of that script! In addition to lists of doctors and meds and the more mechanical aspects of care, a list of who a person is -- interests, events both good and bad, personal preferences, the history of someone -- could help make a difference in care even when so much is gone. It attaches a life to "the Alzheimer's down the hall."

Such a script would provide a frame in which to experience the individual. It can educate health care professionals who, despite their training, are still green when it comes to details of who someone had been in earlier life. Behavior once viewed as sick might well have been done in a quest for sanity and healing. Personalization -- fine brush strokes rather than just a whitewash of care -- cannot disappoint. 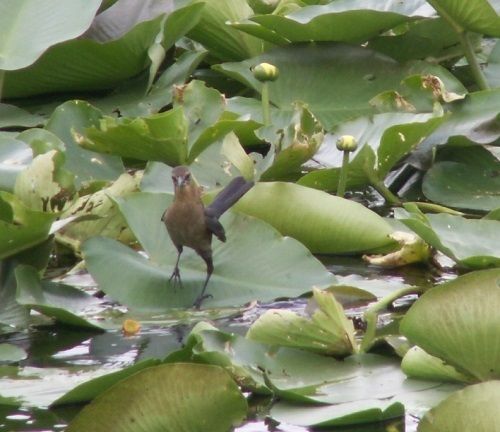 Female boat-tailed grackle, seen on May 8 at the lakeside park my partner and I frequent when we're in town.

Thanks, Pegi! Those grackles were pretty entertaining. :-) I love that quote, too.

Hi--Ah, this is a perfect dessert to my dinner. :)\r\n\r\nIt strikes me that we all need to treated as a whole person. \r\n\r\nI watch the world walk by the hard workers who do all those menial but important tasks (like CNAs or the bagger at the grocery store or the guy who cuts my neighbor's lawn). To remind myself that the task doesn't make the man, I tell myself, Someone loves this person, which makes them very special. So, I say \"hello\" and smile. I don't want to overlook special.\r\n\r\nWe all are loved, which is why we are all special. Which is why we always deserve the benefit of the doubt. Combativeness does not make the patient.